Gold and Silver Crash to levels not seen for 2 weeks 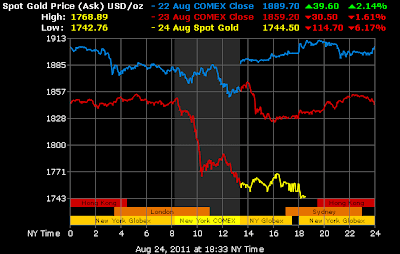 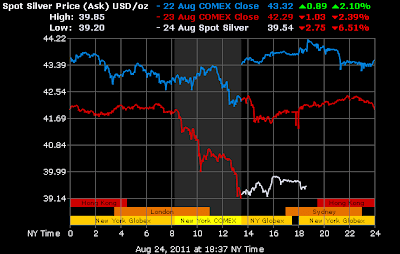 It seems Blythe is back from her summer holidays in Martha's Vineyard and has found out that the Gold and Silver bugs have run amok in her absence, hence we needed to be given a stern whipping for the whole 6 hours of NY COMEX trading.

9/11 After A Decade: Have We Learned Anything? 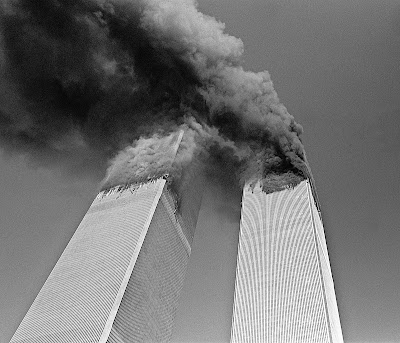 In a few days it will be the tenth anniversary of September 11, 2001. How well has the US government’s official account of the event held up over the decade?

Not very well. The chairman, vice chairman, and senior legal counsel of the 9/11 Commission wrote books partially disassociating themselves from the commission’s report. They said that the Bush administration put obstacles in their path, that information was withheld from them, that President Bush agreed to testify only if he was chaperoned by Vice President Cheney and neither were put under oath, that Pentagon and FAA officials lied to the commission and that the commission considered referring the false testimony for investigation for obstruction of justice.

In their book, the chairman and vice chairman, Thomas Kean and Lee Hamilton, wrote that the 9/11 Commission was “set up to fail.” Senior counsel John Farmer, Jr., wrote that the US government made “a decision not to tell the truth about what happened,” and that the NORAD “tapes told a radically different story from what had been told to us and the public.” Kean said, “We to this day don’t know why NORAD told us what they told us, it was just so far from the truth.”

Most of the questions from the 9/11 families were not answered. Important witnesses were not called. The commission only heard from those who supported the government’s account. The commission was a controlled political operation, not an investigation of events and evidence. Its membership consisted of former politicians. No knowledgeable experts were appointed to the commission.

To be clear, neither Cleland nor members of the commission suggested that 9/11 was an inside job to advance a war agenda. Nevertheless, neither Congress nor the media wondered, at least not out loud, why President Bush was unwilling to appear before the commission under oath or without Cheney, why Pentagon and FAA officials lied to the commission or, if the officials did not lie, why the commission believed they lied, or why the White House resisted for so long any kind of commission being formed, even one under its control.

One would think that if a handful of Arabs managed to outwit not merely the CIA and FBI but all 16 US intelligence agencies, all intelligence agencies of our allies including Mossad, the National Security Council, the State Department, NORAD, airport security four times on one morning, air traffic control, etc., the President, Congress, and the media would be demanding to know how such an improbable event could occur. Instead, the White House put up a wall of resistance to finding out, and Congress and the media showed little interest.

David Ray Griffen has written 10 carefully researched books documenting problems in the government’s account. Scientists have pointed out that the government has no explanation for the molten steel. NIST has been forced to admit that WTC 7 was in free fall for part of its descent, and a scientific team led by a professor of nano-chemistry at the University of Copenhagen has reported finding nano-thermite in the dust from the buildings.

Larry Silverstein, who had the lease on the World Trade Center buildings, said in a PBS broadcast that the decision was made “to pull” Building 7 late in the afternoon of 9/11. Chief fire marshals have said that no forensic investigation was made of the buildings’ destruction and that the absence of investigation was a violation of law.

Some efforts have been made to explain away some of the evidence that is contrary to the official account, but most of the contrary evidence is simply ignored. The fact remains that the skepticism of a large number of knowledgeable experts has had no effect on the government’s position other than a member of the Obama administration suggesting that the government infiltrate the 9/11 truth organizations in order to discredit them.

The practice has been to brand experts not convinced by the government’s case “conspiracy theorists.” But of course the government’s own theory is a conspiracy theory, an even less likely one once a person realizes its full implication of intelligence and operational failures. The implied failures are extraordinarily large; yet, no one was ever held accountable.

Moreover, what do 1,500 architects and engineers have to gain from being ridiculed as conspiracy theorists? They certainly will never receive another government contract, and many surely lost business as a result of their “anti-American” stance. Their competitors must have made hay out of their “unpatriotic doubts.” Indeed, my reward for reporting on how matters stand a decade after the event will be mail telling me that as I hate America so much I should move to Cuba.

Scientists have even less incentive to express any doubts, which probably explains why there are not 1,500 Physicists for 9/11 Truth. Few physicists have careers independent of government grants or contracts. It was a high school physics teacher who forced NIST to abandon its account of Building 7’s demise. Physicist Stephen Jones, who first reported finding evidence of explosives, had his tenure bought out by BYU, which no doubt found itself under government pressure.

We can explain away contrary evidence as coincidences and mistakes and conclude that only the government got it all correct, the same government that got everything else wrong.

In fact, the government has not explained anything. The NIST report is merely a simulation of what might have caused the towers to fail if NIST’s assumptions programed into the computer model are correct. But NIST supplies no evidence that its assumptions are correct.

Building 7 was not mentioned in the 9/11 Commission Report, and many Americans are still unaware that three buildings came down on 9/11.

Let me be clear about my point. I am not saying that some black op group in the neoconservative Bush administration blew up the buildings in order to advance the neoconservative agenda of war in the Middle East. If there is evidence of a coverup, it could be the government covering up its incompetence and not its complicity in the event. Even if there were definite proof of government complicity, it is uncertain that Americans could accept it. Architects, engineers, and scientists live in a fact-based community, but for most people facts are no match for emotions.

My point is how uninquisitive the executive branch including the security agencies, Congress, the media, and much of the population are about the defining event of our time.

There is no doubt that 9/11 is the determinant event. It has led to a decade of ever expanding wars, to the shredding of the Constitution, and to a police state. On August 22 Justin Raimondo reported that he and his website, Antiwar.com, are being monitored by the FBI’s Electronic Communication Analysis Unit to determine if Antiwar.com is “a threat to National Security” working “on behalf of a foreign power.”

Francis A. Boyle, an internationally known professor and attorney of international law, has reported that when he refused a joint FBI-CIA request to violate the attorney/client privilege and become an informant on his Arab-American clients, he was placed on the US government’s terrorist watch list.

Boyle has been critical of the US government’s approach to the Muslim world, but Raimondo has never raised, nor permitted any contributor to raise, any suspicion about US government complicity in 9/11. Raimondo merely opposes war, and that is enough for the FBI to conclude that he needs watching as a possible threat to national security.

The US government’s account of 9/11 is the foundation of the open-ended wars that are exhausting America’s resources and destroying its reputation, and it is the foundation of the domestic police state that ultimately will shut down all opposition to the wars. Americans are bound to the story of the 9/11 Muslim terrorist attack, because it is what justifies the slaughter of civilian populations in several Muslim countries, and it justifies a domestic police state as the only means of securing safety from terrorists, who already have morphed into “domestic extremists” such as environmentalists, animal rights groups, and antiwar activists.

Today Americans are unsafe, not because of terrorists and domestic extremists, but because they have lost their civil liberties and have no protection from unaccountable government power. One would think that how this came about would be worthy of public debate and congressional hearings.
Posted by Unknown at 8:13 AM No comments: