"Eye of newt, and toe of frog,
Wool of bat, and tongue of dog,
Adder's fork, and blind-worm's sting,
Lizard's leg, and howlet's wing,--
For a charm of powerful trouble,
Like a hell-broth boil and bubble"

The following is the classic timeline of all financial bubbles. I have added where I currently think Gold and Silver are placed. Whilst some might point out the lack of a dip in the silver price in the 2008 and 2011 period I believe that come the mania phase the drop in those periods will be seen as a slight dents when plotted on a axis with considerably larger numbers than silver charts currently possess. Of course these are just my opinions and no one can compute the myriad of variables and unknowns of the future but if you believe we are in for a bubble in Gold and Silver one day then this a good a guide as any to the possible price action. 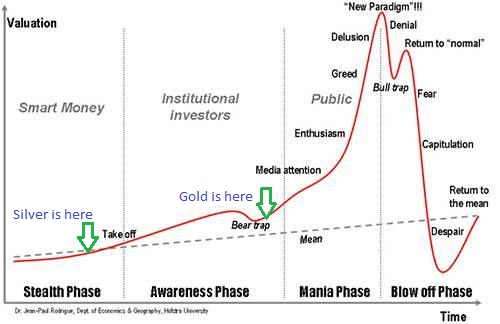 The UN General Assembly has voted to upgrade Palestinians' diplomatic status to a "non-member observer state," thus implicitly recognizing a Palestinian state. This comes despite strong opposition from the US and Israel - FULL STORY http://on.rt.com/iiwg2o

With all the breathless news in the Gold press and on CNN about Turkey daring to pay for Iranian gas with gold, instead of showering in cold water and freezing in cold homes over winter, chillout goes all things gold and Turkish.

Note the "Avoid Trivia" logo behind Clinton, how right they are.

The United Nations has voted overwhelmingly to recognize a Palestinian state. Secretary of State Hillary Rodham Clinton called the recognition "unfortunate and counterproductive."

Posted by Unknown at 4:00 PM No comments:

On this Thursday, November 29 edition of the Alex Jones Show, Alex covers the impending fiscal cliff, continued thuggish behavior by the TSA, and schools locking students up in solitary confinement.

Posted by Unknown at 3:04 PM No comments:

The Japanese government has approved a $10.7bn stimulus package to help boost the ailing economy. Many of the country's major industries are struggling to stay profitable. The country's once strong technology industry in particular is suffering - with well-known electronics brands posting major annual losses and announcing job cuts. Al Jazeera's Harry Fawcett reports from Tokyo.

Bank of Japan at a turning point?

The United Nations has voted overwhelmingly to recognize a Palestinian state. The resolution was approved by a more than two-thirds majority of the 193-member world body.

From The Brisbane Times

Australia will be the second-best country in the world to be born in next year, a study says.

The "lucky country" scored 8.12 out of a possible 10 points, just 0.1 behind Switzerland, The Economist's Intelligence Unit said in their 2013 where-to-be-born index released last week.

Indicators used include geography, demography, social and cultural characteristics, government policies and the state of the world economy.

The list was dominated by smaller economies, with larger European economics such as Great Britain (27th), France (26th) and Germany (16th) languishing further down the list. The US, which topped the 1998 list, came in 16th.

Federal Reserve officials are nearing a decision to continue stimulus efforts into 2013 as the U.S. faces the fiscal cliff and fragile economies elsewhere in the world. WSJ's Chief Economics Correspondent Jon Hilsenrath reports.

Abby Martin Breaks the Set on US Foreign Policy, Palestinian Statehood, Jimmy Carter and the erosion of the rule of law.

Gold - Solution to the Banking Crisis

The Basel Committee on Banking Supervision is an exclusive and somewhat mysterious entity that issues banking guidelines for the world’s largest financial institutions. It is part of the Bank of International Settlements (BIS) and is often referred to as the Central Banks’ central bank. Ever since the financial meltdown four years ago, the Basel Committee has been hard at work devising new international regulatory rules designed to minimize the potential for another large-scale financial meltdown. The Committee’s latest ‘framework’, as they call it, is referred to as “Basel III”, and involves tougher capital rules that will force all banks to more than triple the amount of core capital they hold from 2% to 7% in order to avoid future taxpayer bailouts. It doesn’t sound like much of an increase, and according to the Basel group’s own survey, the 100 largest global banks will only require approximately €370 billion in additional reserves to comply with the new regulations by 2019.1 Given that the Spanish banks alone are believed to need well over €100 billion today simply to keep their capital ratios in check, it is hard to believe €370 billion will be enough protect the world’s “too-big-to-fail” banks from future crises, but it is indeed a step in the right direction.2

Initial implementation of Basel III’s capital rules was expected to come into effect on January 1, 2013, but US banking regulators issued a press release on November 9th stating that they wouldn’t meet the deadline, citing a large volume of letters (ie. complaints) received from bank participants and a “wide range of views expressed during the comment period”.3 It has also been revealed that smaller US regional banks are loath to adopt the new rules, which they view as overly complicated and potentially devastating to their bottom lines. The Independent Community Bankers of America has even requested a Basel III exemption for all banks with less than $50 billion in assets,“in order to avoid large-scale industry concentration that would curtail credit for consumers and business borrowers, especially in small communities.”4 The long-term implementation period for all Basel III measures actually extends to 2019, so the delays are not necessarily meaningful news, but they do illustrate the growing rift between the US banking cartel and its European counterpart regarding the Basel III framework. JP Morgan’s CEO Jamie Dimon is on record having referred to Basel III regulations as “un-American” for their favourable treatment of European covered bonds over US mortgage-backed securities.5 Readers may also remember when Dimon was caught yelling at Mark Carney, Canada’s (soon to be former) Central Bank Governor and head of the Financial Stability Board, during a meeting in Washington to discuss the same topic.6 More recently, Deutsche Bank’s co-chief executive Juergen Fitschen suggested that the US regulators’ delay was “hurting trans-Atlantic relations” and creating distrust... stating, “when the whole thing is called un-American, I can only say in disbelief, who can still believe in this day and age that there can be purely European or American rules.”7Suffice it to say that Basel III implementation has not gone as smoothly as planned.

One of the more relevant aspects of Basel III for our portfolios is its treatment of gold as an asset class. Documents posted by the Bank of International Settlements (which houses the Basel Committee) and the United States FDIC have both referenced gold as a “zero percent risk-weighted item” in their proposed frameworks, which has launched spirited rumours within the gold community that Basel III may define gold as a “Tier 1” asset, along with cash and AAA-government securities.8,9 We have discovered in delving further that gold’s treatment in Basel III is far more complicated than the rumours suggest, and is still, for all intents and purposes, very much undecided. Without burdening our readers with the turgid details, it turns out that the reference to gold as a “zero-percent risk-weighted item” only relates to its treatment in specific Basel III regulation related to the liquidity of bank assets vs. its liabilities. (For a more comprehensive explanation of Basel III’s treatment of gold, please see the Appendix). But what the Basel III proposals do confirm is the regulators’ desire for banks to improve their liquidity position by holding a larger amount of “high-quality”, liquid assets in order to improve their overall solvency in the event of another crisis.

Read more
Posted by Unknown at 10:59 AM No comments:

British ex-Defense Minister, Lord Gilbert, has threatened militants in Afghanistan and Pakistan with a neutron bomb. The UK could create "cordons sanitaire along various borders where people are causing trouble", he said.

In this episode, Max Keiser and Stacy Herbert welcome Mark Carney to the City of London freak show at which Max predicts that Carney will play the bearded hermaphrodite who devalues the pound by 25 percent and yet only manages to introduce an ice age of economic growth. Max and Stacy also compare the rebels robbing the central bank in Goma to the Goldman Sachs takeover of central banks in Europe. In the second half, Max Keiser talks to professor and author, Andrew Ross, about the 'angel capitalists' striking debt across America and about the historic Black Friday strike at Walmart.