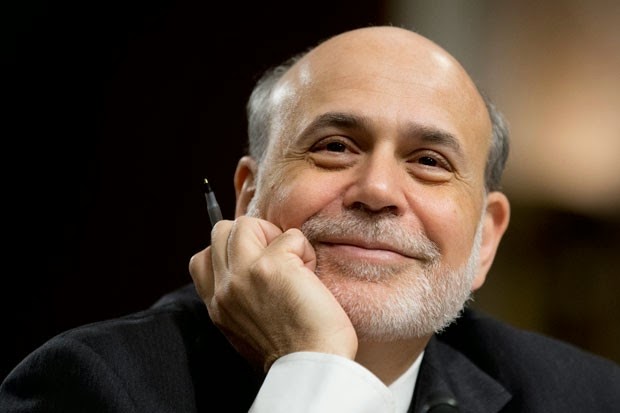 Today is the last day for Ben Bernanke in his role as the US Federal Reserve Chairman. Whilst he won't be remembered fondly by all, he really should be by precious metals bugs, for without him stimulating our passion we would never have had the stellar recovery in prices from the 2008/2009 lows.

Sen. Rand Paul (R-Ky.) is planning to file a class-action lawsuit against the National Security Agency for spying on Americans with its bulk metadata collection programs. At the State of the Net conference in Washington, DC, Paul questioned the constitutionality of using one warrant to collect hundreds of thousands of records. RT's Ameera David talks to Wes Benedict, executive director of the Libertarian National Committee, and Matt Binder, a producer at The Majority Report, about the constitutionality of the NSA's surveillance programs and other news about the spy agency.

What in the World Is Worrying Markets?

Jan. 30 (Bloomberg) -- Bloomberg's Alix Steel and Economics Editor Michael McKee examine the issues impacting markets in "On The Markets" on Bloomberg Television's "In The Loop."

James Grant: Fed has 'fingers and thumbs' on scale of finance

Why is the Fed tapering?

On January 17, 2014, we explained “The Hows and Whys of Gold Price Manipulation.” http://www.paulcraigroberts.org/2014/01/17/hows-whys-gold-price-manipulation/
In former times, the rise in the gold price was held down by central banks selling gold or leasing gold to bullion dealers who sold the gold. The supply added in this way to the market absorbed some of the demand, thus holding down the rise in the gold price.

As the supply of physical gold on hand diminished, increasingly recourse was taken to selling gold short in the paper futures market. We illustrated a recent episode in our article. Below we illustrate the uncovered short-selling that took the gold price down today (January 30, 2014).

When the Comex trading floor opened January 30 at 8:20AM NY time, the price of gold inexplicably plunged $17 over the next 30 minutes. The price plunge was triggered when sell orders flooded the Comex trading floor. Over the course of the previous 23 hours of trading, an average of 202 gold contracts per minute had traded. But starting at the 8:20AM Comex, there were four 1-minute windows of trading here’s what happened: Over those four minutes of trading, an average of 3,424 contracts per minute traded, or 17 times the average per minute volume of the previous 23 hours, including yesterday’s Comex trading session.

The yellow arrow indicates when the Comex floor opened for gold futures trading. There was not any news events or related market events that would have triggered a sell-off like this in gold. If an entity holding many contracts wanted to sell down its position, it would accomplish this by slowly feeding its position to the market over the course of the entire trading day in order to avoid disturbing the price or “telegraphing” its intent to sell to the market.

Instead, today’s selling was designed to flood the Comex trading floor with a high volume of sell orders in rapid succession in order to drive the price of gold as low as possible before buyers stepped in.

The reason for this is two-fold: Driving down the price of gold assists the Fed in its efforts to support the dollar, and the Comex is running out of physical gold available to be delivered to those who decide to take delivery of gold instead of cash settlement.

The February gold contract is subject to delivery starting on January 31st. As of January 29th, 2 days before the delivery period starts, there were 2,223,000 ounces of gold futures open against 375,000 ounces of gold available to be to be delivered. The primary banks who trade Comex gold (JP Morgan, HSBC, Bank Nova Scotia) are the primary entities who are short those Comex contracts. Typically toward the end of a delivery month, these banks drive the price of gold lower for the purpose of coercing holders of the contracts to sell. This avoids the problem of having a shortage of gold available to deliver to the entities who decide to take delivery. With an enormous amount of physical gold moving from the western bank vaults to the large Asian buyers of gold, the Comex ultimately does not have enough gold to honor delivery obligations should the day arrive when a fifth or a fourth of the contracts are presented for delivery. Prior to a delivery period or due date on the contracts, manipulation is used to drive the Comex price of gold as low as possible in order to induce enough selling to avoid a possible default on gold delivery.

Following the taper announcement on January 29, the gold price rose $14 to $1270, and the Dow Jones Index dropped 100 points, closing down 74 points from its trading level at the time the tapering was announced. These reactions might have surprised the Fed, leading to the stock market support and gold price suppression on January 30.

Manipulation of the gold price is a foregone conclusion. The question is: why is the Fed tapering? The official reason is that the recovery is now strong enough not to need the stimulus. There are two problems with the official explanation. One is that the purpose of QE has always been to support the prices of the debt-related derivatives on the balance sheets of the banks too big to fail. The other is that the Fed has enough economists and statisticians to know that the recovery is a statistical artifact of deflating GDP with an understated measure of inflation. No other indicator–employment, labor force participation, real median family income, real retail sales, or new construction–indicates economic recovery. Moreover, if in fact the economy has been in recovery since June 2009, after 4.5 years of recovery it is time for a new recession.

One possible explanation for the tapering is that the Fed has created enough new dollars with which to purchase the worst part of the banks’ balance sheet problems and transfer them to the Fed’s balance sheet, while in other ways enhancing the banks’ profits. With the job done, the Fed can slowly back off.

The problem with this explanation is that the liquidity that the Fed has created found its way into the stock and bond markets and into emerging economies. Curtailing the flow of liquidity crashes the markets, bringing on a new financial crisis.

We offer two explanations for the tapering. One is technical, and one is strategic.

First the technical explanation. The Fed’s bond purchases and the banks’ interest rate swap derivatives have made a dent in the supply of Treasuries. With income tax payments starting to flow in, fewer Treasuries are being issued to put pressure on interest rates. This permits the Fed to make a show of doing the right thing and reduce bond purchases. As a weakening economy becomes apparent as the year progresses, calls for the Fed to support the economy will permit the Fed to broaden the array of instruments that it purchases.

A strategic explanation for tapering is that the growth of US debt and money creation is causing the world to turn a jaundiced eye toward the US dollar and toward its role as world reserve currency.

Currently the Russian Duma is discussing legislation that would eliminate the dollar’s use and presence in Russia. Other countries are moving away from the dollar. Recently the Nigerian central bank reduced its dollar reserves and increased its holdings of Chinese yuan. Zimbabwe, which was using the US dollar as its own currency, switched to Chinese yuan. The former chief economist of the World Bank recently called for terminating the use of the dollar as world reserve currency. He said that “the dominance of the greenback is the root cause of global financial and economic crises.” Moreover, the Federal Reserve is very much aware of the flight away from the dollar into gold, because it is this flight that causes the Fed to manipulate the gold price in order to hold it down and in order to be able to free up gold for delivery.

The Fed knows that the ability of the US to pay its bills in its own currency is the reason it can stand its large trade imbalance and is the basis for US power. If the dollar loses the reserve currency role, the US becomes just another country with balance of payments and currency problems and an inability to sell its bonds in order to finance its budget deficits.

In other words, perhaps the Fed understands that a dollar crisis is a bigger crisis than a bank crisis and that its bailout of the banks is undermining the dollar. The question is: will the Fed let the banks go in order to save the dollar?

Paul Craig Roberts is a former Assistant Secretary of the US Treasury for Economic Policy. Dave Kranzler traded high yield bonds for Bankers Trust for a decade. As a co-founder and principal of Golden Returns Capital LLC, he manages the Precious Metals Opportunity Fund.
Posted by Unknown at 11:04 AM No comments:

Happy Year of the Horse

Kung hei fat choi to all my blog followers.

Breaking The Set - State of the Union Fail

I suggest jumping to the 15min point unless you are really into your aquatic mammals.

Posted by Unknown at 9:47 AM No comments: