Jun 13, 2012 by SGTbull07 Greetings friends. I'm proud to be able to present this in-depth interview with radio show host Mike Rivero of WhatReallyHappened.com. I wanted to get Mike's opinion on Rand Paul's endorsement of Mitt Romney, and his perspective on the coming collapse of the Euro Zone and the U.S. fiat-dollar paradigm. [Part 1 of 2] China is widely expected to overtake India as the world’s biggest consumer of gold this year with gold purchases rising by 10 per cent, according to the leading Chinese bank ICBC. Why?

The Chinese are moving out of the dollar and into gold. That is what a seemingly ill-educated gold trader in the Sharjah Gold Souk told us earlier this year.

King for a day


You don’t need to be a genius to see the logic behind this move. The dollar might be king today but only against the faltering euro. But what happens when we are reminded that US debts are running at levels comparable with Greece?

As the largest holder of foreign dollar reserves the Chinese are only too painfully aware of how exposed this leaves their savings in a slump. US treasuries are the biggest bubble in history as legendary investment adviser Dr Marc Faber reminded us recently (click here).

Diversification for protection really means something if you have most of your wealth tied up in US t-bonds. And where do you go for safety? Things have already gotten so bad for the Swiss franc that it has become pegged to the euro to stop further appreciation.

Then again if you are Indian and with your money in gold and not rupees then you are laughing. The massive depreciation of the rupee puts gold at a fresh all-time high in rupees, even while it is several hudred dollars off its dollar-denominated high of last September. This experience is not lost on the Chinese.

There are less and less safe haven assets in the world and more and more financial markets are manipulated by central banks because they have control over the supply of paper money. Gold and silver they can suppress through the collusion of the bullion banks but this will not withstand the pressure of massive demand for precious metals as the global economic system cracks up.


Imagine what the US economy would look like with the base rate set to Italian levels of six per cent. Asset values from bonds to stocks to real estate would be decimated. A deflationary depression would set in.

And yet nobody currently looks seriously at what is a very obvious future scenario as the artificial supports used to keep the world economy afloat since the global financial crisis begin to fail. The Chinese in buying gold and silver are just peering a bit further into the future and buying insurance against the worst case scenario.

The problem is that a seriously mishandled eurozone sovereign debt crisis may now make this the base case scenario.
Posted by Unknown at 5:28 PM No comments:

James Grant - "What Does the Fed Do?"

This lecture was delivered by James Grant, founder and editor of Grant's Interest Rate Observer.

Published on Mar 23, 2012 by CongressmanRonPaul

A bit late with this post, but it is still as valid as it was back in February.

Posted by Unknown at 1:00 PM No comments:

Jamie has a cuff link

Seems Jamie was wearing Presidential Seal Cuff Links during his Banking Committee hearing overnight. Was he hoping they would ward off the animal spirits?

Gold plated, how appropriate. A veneer of gold but not gold itself, just like the paper Gold and Silver markets, although a bargain here at $24.99

U.S. government to use drones the size of GOLF BALLS to spy on AMERICAN citizens

"The right of the people to be secure in their persons, houses, papers, and effects, against unreasonable searches and seizures, shall not be violated, and no Warrants shall issue, but upon probable cause, supported by Oath or affirmation, and particularly describing the place to be searched, and the persons or things to be seized"

The Obama administration has been widely criticized for its increased reliance on drone strikes to kill suspected terrorists in Pakistan and Afghanistan, but according to published reports, a plan is now in the works to harness tiny drones to spy on U.S. citizens.

A 30-page memorandum issued by President Barack Obama’s Secretary of the Air Force Michael Donley on April 23 has stated that the drones, some as small as golf balls, may be used domestically to ‘collect information about U.S. persons.’

The photos that the drones will take may be retained, used or even distributed to other branches of the government so long as the ‘recipient is reasonably perceived to have a specific, lawful governmental function’ in asking for them.

The purpose of the cited memorandum is stated as 'balancing … obtaining intelligence information...and protecting individual rights guaranteed by the U.S. Constitution.'

Read more: http://www.dailymail.co.uk/news/article-2156720/Eye-sky-U-S-government-use-drones-size-GOLF-BALLS-spy-citizens.html#ixzz1xj1fFQGJ
Posted by Unknown at 11:11 AM No comments:

Egon von Greyez, Egon von Greyerz (EvG): Founder and Managing Partner of Matterhorn Asset Management AG & GoldSwitzerland, discusses the risk of world wide economic downturn, the Europe and the US budget deficits and government debt. He also discusses the paper market vs. the physical market for Gold. Listen to the interview with Eric king of KWN here
Posted by Unknown at 10:56 AM No comments:

"All these things have been pushing gold up and down, and up and down but I think ultimately the markets are becoming more pro-gold"

Listen to the interview between Geoff Candy of mine web.com and Jeff Nichols (managing director of American Precious Metals Advisers) here
Posted by Unknown at 10:44 AM No comments: 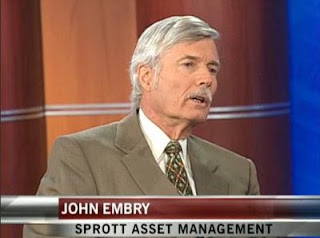 Jamie Dimon testified on JPMorgan Chases' $2 billion trading loss on May 10, 2012, and business practices in the banking industry. Among the issues he addressed were the bank bailouts following the 2008 financial crisis, banking regulations, and risk management. He also warned of a looming "fiscal cliff" when tax cuts and automatic spending cuts hit simultaneously.

Moody's downgrades Spain's credit rating from "back away slowly" to "run away screaming!!"

Rating agency Moody's has cut its rating on Spanish government debt by three notches from A3 to Baa3. Cyprus’s sovereign debt was lowered by two notches from Ba1 to Ba3.

The agency said Wednesday that Spain’s debt burden would increase once the EU has approved a plan to help the country's banks. It has Spain under further review and could lower its rating even further, Reuters reports. Moody’s points out that the Spanish government has "very limited" access to international debt markets and notes the general weakness of the country's economy.

For Cyprus, Moody’s is citing the increased risks of a Greek exit from the eurozone and its generally unstable fiscal position, while Cyprus has close cultural, business and political links with this country. Just like Spain, Cyprus was also put on review for further downgrade. Its weak credit position is jeopardized by limited access to international markets, Moody's said in a statement.

Spain is the eurozone's fourth biggest economy, while Cyprus is the third smallest.

Where are you off to today?