From The Daily Times

LONDON: Gold prices edged higher in Europe on Thursday, but were kept in a narrow range by uncertainty over how far the Federal Reserve will satisfy market speculation that it is set to unveil another round of measures to stimulate the US economy.

A speech by Fed chairman Ben Bernanke at a central bankers’ symposium in Jackson Hole, Wyoming, on Friday will provide clues on the chances of the Fed embarking on another asset buying programme, known as quantitative easing.

Spot gold was up 0.1 percent at $1,657.14 an ounce at 1141 GMT, while US gold futures for December delivery were down $2.90 an ounce at $1,660.10. Inflows into gold exchange-traded funds have risen sharply this month, with holdings of the largest, New York’s SPDR Gold Trust up nearly 38 tonnes so far this month, their largest monthly inflow since November. The precious metal rallied to a 4-1/2 month high on Monday as expectations grew that the Fed was willing to launch more stimulus measures, but it has failed to sustain those gains. Barclays Capital technical analysts said they too were neutral in the medium term. “We would buy gold dips toward $1,640, and stay bullish above $1,620,” it said. “Above $1,700 signals further upside potential toward $1,768/88.”

Spot silver was up 0.2 percent at $30.73 an ounce. The gold/silver ratio, which measures the number of silver ounces needed to buy an ounce of gold, dropped to its lowest early May at 53.9, as silver made up some lost ground against gold. In a weekly note, precious metals house Heraeus said that made it vulnerable to a correction if Bernanke disappoints.

What has changed since the end of the Cold War? Does the world today match what was envisioned decades ago by some prominent Western leaders? Have we reached the 'end of history?' Will borders remain untouched as sectarianism and nationalism take root across the world? Or are we living through a paradigm shift, where the status quo is unlikely to prevail? And how painful will this shift be until a new order is established? CrossTalking with George Szamuely, Alan Kuperman and Ryan Mauro.

Jim Rogers discusses gold, silver, government stimulus and the future of commodities with Geoff Candy of Mineweb. Listen to the interview here
Posted by Unknown at 4:53 PM No comments:

The latest report from Jim Willie on possible issues with Morgan Stanley and interest rate swaps. Read the report here or click on the image below. 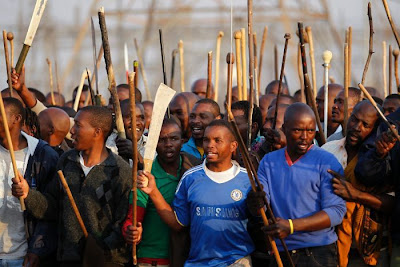 I can't imagine this is going to improve the situation any. We could be looking at ongoing mining disruptions at this platinum mine and the trouble could spread to other platinum and gold mines.

(Reuters) - South African prosecutors on Thursday charged 270 striking miners with murder of 34 co-workers seen being shot dead in a hail of police bullets captured in videos broadcast around the world.

Prosecution have filed papers invoking a measure called "common purpose" seldom used since the dying days of apartheid, arguing the miners were complicit in the killings since they were arrested at the scene with weapons.

Legal experts said the move will likely collapse when a court hearing bail applications for the 270 near the mine resumes sessions next week and lambasted prosecutors for inflaming a tense situation by seeking a mass indictment that will eventually be rejected.

"This is bizarre and shocking and represents a flagrant abuse of the criminal justice system in an effort to protect the police and/or politicians," Pierre de Vos, a law expert at the University of Cape Town, wrote in a blog entry.

"The apartheid state often used this provision to secure a criminal conviction against one or more of the leaders of a protest march, or against leaders of struggle organizations like the ANC." Read more

The National Union of Mineworkers spokesperson, Lesiba Seshoka, has confirmed reports of a renewed standoff at Lonmin's Eastern Platinum operations - part of the broader Marikana mine.

In a move that is indicative that tensions are still running high, Seshoka said that the union has had reports that a group of approximately 30 people are harassing workers and threatening them that if they return to work they will be killed.

A caller into a local radio station has made the same claims and said that the group was based at one of the hostels at the mine.

Lonmin has confirmed that preliminary attendance figures for Monday are on average 13% across all shafts. "We understand that employees are waiting for the environment to be safe before returning to work. There have been incidents of intimidation towards bus drivers overnight as well as intimidation of Eastern's workers this morning, preventing them from coming to work. Management is appealing to all stakeholders to remain calm," said the miner's press release.

Read more
Posted by Unknown at 2:41 PM No comments:

Martin Armstrong - The Economic Confidence Model and the Future

Aug 30, 2012 by Euronews http://www.euronews.com/ There is more economic pain for the people of Spain in the form of higher inflation.

In this episode, Max Keiser and Stacy Herbert discuss panic alarms for the population and medieval screeches about persecution from the corporate welfare class. In the second half of the show, Max Keiser talks to Professor Yaneer Bar-Yam of the New England Complex Systems Institute about the role of speculation and ethanol in rising food prices and the tipping point to revolution that, when it happens, could happen in a matter of days or weeks.