Jim Rogers Says He's Hedged Some Gold But Not Selling

Paul Craig Roberts - The Case of the Missing Recovery 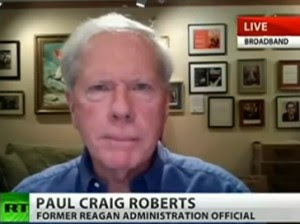 Have you seen the economic recovery? I haven’t either. But it is bound to be around here somewhere, because the National Bureau of Economic Research spotted it in June 2009, four and one-half years ago.

It is a shy and reclusive recovery, like the “New Economy” and all those promised new economy jobs. I haven’t seen them either, but we know they are here, somewhere, because the economists said so.

Congress must have seen all those jobs before they went home for Christmas, because our representatives let extended unemployment benefits expire for 1.3 million unemployed Americans, who have not yet met up with those new economy jobs, or even with an old economy job for that matter.

By letting extended unemployment benefits expire, Congress figures that they saved 1.3 million Americans from becoming lifelong bums of the nanny state and living off the public purse. After all, who do those unemployed Americans think they are? A bank too big to fail? The military-security complex? Israel?

What the unemployed need to do is to form a lobby organization and make campaign contributions.

For example, our representative in the White House tells us that ObamaCare is a worthy program even though those who are supposed to be helped by it aren’t because of large deductibles, copays, and Medicaid estate recovery. The cost of this non-help is a doubling of the policy premiums on those insured Americans who did not need ObamaCare and the reclassification by employers of workers’ jobs from full-time to part-time in order to avoid medical insurance costs. All it took was campaign contributions from the insurance industry to turn a policy that hurts most and helps none into a worthy program. Worthy, of course, for the insurance companies.

Keep in mind that it is the people who could not afford medical insurance who have to come up with their part of the premium or pay a penalty. How do people who have no discretionary income come up with what are to them large sums of money? Are they going to eat less, drive less, dress less? If so, what happens to people employed in those industries when demand falls? Apparently, this was too big a thought for the White House occupant, his economists, and our representatives in Congress.

To put these incomes into some perspective, the poverty threshold for a family of four in 2013 was $23,550.

In recent years, the only incomes that have been growing in real terms are those few at the top of the income distribution. Those at the top have benefitted from “performance bonuses,” often acquired by laying off workers or by replacing US workers with cheaper foreign labor, and from the rise in stock and bond prices caused by the Federal Reserve’s policy of quantitative easing. Everyone else has experienced a decline in real income and wealth.

As only slightly more than one percent of Americans make more than $200,000 annually and less than four-tenths of one percent make $1,000,000 or more annually, there are not enough people with discretionary income to drive the economy with consumer spending. When real median family income and real per capita income ceased to grow and began falling, Federal Reserve chairman Alan Greenspan substituted a credit expansion to take the place of the missing growth in income. However, as consumers became loaded with debt, it was no longer possible to expand consumer spending with credit expansion.

World War II left the US economy the only undamaged industrial and manufacturing center. Prosperity ensued. But by the 1970s the Keynesian demand management economic policy had produced stagflation. Reagan’s supply-side policy was able to give the US economy another 20 years. But the collapse of the Soviet Union brought an era of jobs offshoring to large Asian economies that formerly were closed to Western capital. Once corporate executives realized that they could earn multi-million dollar performance bonuses by moving US jobs abroad and once they were threatened by Wall Street and shareholder advocates with takeovers if they did not, American capitalism began giving the US economy to other countries, mainly located in Asia. As high productivity manufacturing and professional service jobs (such as software engineering) moved offshore, US incomes stagnated and fell.

As real income growth stagnated, wives entered the work force to compensate. Children were educated by refinancing the home mortgage and using the equity in the family home or with student loans that they do not earn enough to repay. Since the December 2007 downturn, Americans have used up their coping mechanisms. Homes have been refinanced. IRAs raided. Savings drawn down. Grown children, now adults, are back home with parents. The falling labor force participation rate signals that the economy can no longer provide jobs for the workforce. In such a situation, economic recovery is impossible.

What the Treasury and Federal Reserve have done, with the complicity of the White House, Congress, economists, and the media, is to focus on rescuing a half dozen banks “too big to fail.” The consequence of focusing economic policy on saving the banks is rigged financial markets and massive stock and bond market bubbles. To protect the dollar’s exchange value from quantitative easing, the price of gold has been forced down in the paper futures market, with the consequence that physical gold is shipped to Asia where it is unavailable as a refuge for Americans faced with currency depreciation.

At a time when most Americans are running out of coping mechanisms, the US faces a possible financial collapse and a high rate of inflation from dollar depreciation as the Fed pours out newly created money in an effort to support the rigged financial markets.

It remains to be seen whether the chickens can be kept from coming home to roost for another year.
Posted by Unknown at 4:42 PM No comments:

The Sound of Pi

Thanks to Martin Armstrong for the link to this video. “All through my life I've had this strange unaccountable feeling that something was going on in the world, something big, even sinister, and no one would tell me what it was."

"No," said the old man, "that's just perfectly normal paranoia. Everyone in the Universe has that.”
― Douglas Adams, The Hitchhiker's Guide to the Galaxy

Gerald Celente on This Week in Money