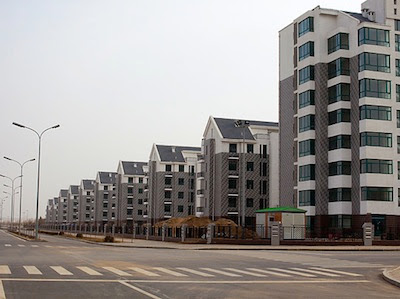 Property stocks in China were weak today due to media reports that the Beijing and Shanghai authorities were investigating the high vacancy rate for Chinese property. Markets are worried they'll be shocked by what they discover and clamp down on speculation even harder than they have.

How large might the vacancy problem be? Here's a taste:

Recent statistics show that there are about 64 million apartments and houses that have remained empty during the past six months, according to Chinese media reports. On the assumption that each flat serves as a home to a typical Chinese family of three (parents and one child), the vacant properties could accommodate 200 million people, which account for more than 15% of the country’s 1.3 billion population. But instead, they remain empty. This is in part because many Chinese believe that a home is not a real home unless you own the flat.

And so people prefer buying to renting, and as a result, the rental yield is relatively low.

Why would so many properties be held vacant? They're seen as long-term investments, even if renters aren't available. This is due to the dearth of investment options available to most Chinese, butting up against their rapid wealth creation.

They need to put their money somewhere, but the stock market is under pressure and bank interest doesn't cover inflation. So they plunk their money into a new property, just as a place to store their wealth, even if they don't intend to live in the place and can't find renters.

Multiply this behavior by a few hundred million, and the result is enough vacant properties to house over half of America.
Posted by Unknown at 6:19 AM