The World According to Gold 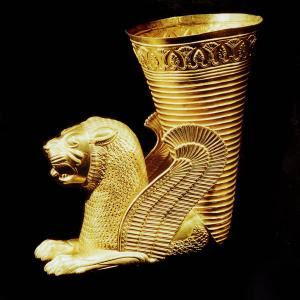 Now that gold is muscling its way towards $2,000 an ounce, the forces of ignorance embodied by post-secondary-accredited yet nonetheless clueless commentators are being given voice by government sponsored media outlets such as CNN. Tokyo Rose was the generic handle accorded to any of a dozen women who, during World War 2 broadcast programming designed to undermine the morale of American troops over the radio.

Coverage such as stories like today's "The Case Against Gold" on CNN Money are designed to undermine the determination of gold accumulators who are genuinely frightened about the purchasing power of their dollars as their government 'quantitatively eases' the economy back onto its feet. By continuously counterfeiting fiat currencies and flooding the markets with such ersatz lucre, the final rush towards economic collapse is momentarily cushioned.

But make no mistake. The acceleration of the rate at which gold increases - the average has been $87 per year since 2000, and in the last 365 days from today, that number is $317 - is an analogous signal that the rate of deterioration of the global economic system as a whole is itself accelerating proportionately. Contrary to the misguided tone in the CNN article suggesting now is not the time to get into gold, the correct sentiment should be that now is the time to put ALL of your liquid, dollar -denominated wealth into gold. All of it.

Here's what is going to happen next:

As to the exact dates of this scenario, it is impossible to predict, because the variables that will force the final capitulation economically are unknown, such as how much money will be issued before the diminishment in purchasing power surpasses the rate at which money is created, and when exactly any given food producing country will stop accepting currency from its trading partners.

In this scenario, less developed and less populated countries that are agriculturally self-sufficient will fare much better than over-populated, over-industrialized agriculturally import-dependent nations.

Countries like Peru, Argentina, Vietnam will continue to eat. Europe, China and most fittingly, the United States, will suffer most.

The current war of words between China and the United States over currency, and Japan's present requirement to sell its own currency to push down the yen's value, are also indicators of a broadening monetary crisis. Here's Tiny Tim Geithner and Barack Obama, neither of whom have a native macro-economic brain cell that functions properly, issuing threats to China about unfairly propping up the value of its currency while apparently ignorant about Japan's violation of the free trade mantra supporting free-floating currency exchange rates.

Its truly astonishing that the hypocrisy of such policy remains under-reported in the mainstream financially media - clear evidence of the Tokyo Rose type of role that top tier financial programming has been roped into.

China holds all the cards here. If they decide the United States needs to be taught a lesson, it will just sell off some of its vast holding of treasuries and force the United States into hyperinflation. The final days of the U.S. hegemonic empire are at last coming to a close, and the world, including clear-minded Americans, should sigh in relief when that day finally comes. Then we can get to work, as a unified world, to build a more realistic and equitable global economy.