From The Golden Truth:

With the ever-shrinking stockpile of physical silver, as evidenced by the unusual degree of backwardation in the price structure of silver futures, the noose is clearly tightening around the necks of the bullion bank(s), which are short an absurd amount of silver. I haven't seen anyone write about this yet, so maybe my thinking is out of whack, but there also seems to be another inverse head-and-shoulders forming in the daily silver chart. Here see for yourself: 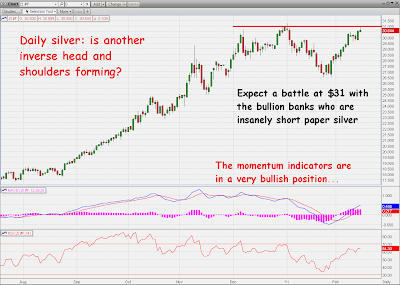 It's there - see it? The last inverse HnS formation was formed roughly from late 2009 to April 2010. It then consolidated sideways until August 2010, when it exploded up to $30 - A 67% move. It would appear that this inverse HnS is forming around the $30 level. We have no way of knowing how long it will take to either fail or resolve with another big move higher. However, given that the basic supply/demand fundamentals, plus the underlying monetary fundamentals which are fueling gold and silver, are even stronger now than during all of 2010, I am placing my bet on a much higher price of silver sometime during 2011.
I have to say that I am quite excited by the reports, if they are true, about some big silver mining companies hedging out some of their production. On one hand, it's not an imprudent business decision to lock-in some profits and create some predicability in the revenue stream. On the other hand, just like Barrick and Anglo-Ashanti, these silver mining companies will likely lose a lot of money on their hedges. And this will create a massive short-cover bid in the future that will drive the price of silver even higher.
Most of you have likely already seen this article about some Asian buyers who are taking a big position in SLV as a means of accumulating a lot of silver (with SLV you can convert your shares if you own, a minimum very large amount, into the delivery of physical silver held by the trust, assuming the silver is not leased out or otherwise encumbered), but here's the link in case you have not had a chance to read this: LINK
Posted by Unknown at 7:35 AM