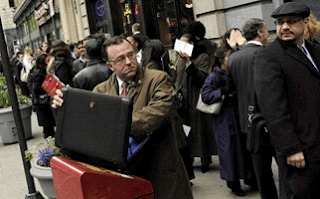 I have opined on this blog before about "the race to the bottom" in global wages and conditions as globalization allows billions of workers to compete and back stab each other to gain paid work. But it seems that US workers have gone for broke and are now willing to work for free.

Not even in Zimbabwe, at the height of the hyperinflation, were even dedicated hospital staff willing to go to work once the bus fare exceeded their wages, yet in the US the economic conditions seem so bad that workers are willing to make a loss just to say they have a job.

How can you eat "self-esteem"?

FORTUNE -- With nearly 14 million unemployed workers in America, many have gotten so desperate that they're willing to work for free. While some businesses are wary of the legal risks and supervision such an arrangement might require, companies that have used free workers say it can pay off when done right.

"People who work for free are far hungrier than anybody who has a salary, so they're going to outperform, they're going to try to please, they're going to be creative," says Kelly Fallis, chief executive of Remote Stylist, a Toronto and New York-based startup that provides Web-based interior design services. "From a cost savings perspective, to get something off the ground, it's huge. Especially if you're a small business."

In the last three years, Fallis has used about 50 unpaid interns for duties in marketing, editorial, advertising, sales, account management and public relations. She's convinced it's the wave of the future in human resources. "Ten years from now, this is going to be the norm," she says.

Why do people work for free?

The benefit unpaid labor offers to a business is pretty clear, but it can also give employees needed experience, a reference letter or even a self-esteem boost in a depressing economy.

Cassie Johnson, a 27-year old in San Marcos, Calif., lost her job as an enrollment adviser for an online university in 2009 and was receiving unemployment benefits for a year before finding an assistant manager position at a Starbucks (SBUX) that's so far from her home she spends most of her pay on gas. Since starting a public relations internship in February, she feels a renewed sense of purpose.

"I'm learning a lot and I feel really good about it. I'm happy. I feel relevant. I'm not making any money, so it's tough, but I feel it's setting me up for a career," Johnson says. "I only have $1.50 left in my checking account right now but I'm living with my boyfriend and he's been really good about supporting me."......read on
Posted by Unknown at 8:55 PM