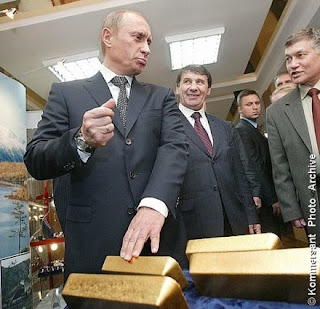 Putin also criticized the U.S. debt situation, and said Russia could not conduct its policy similarly.

"We see that everything is not so good for our friends in the States," Putin told lawmakers in the lower house of parliament. "Look at their trade balance, their debt, and budget. They turn on the printing press and flood the world with dollars," he said.

The speech seems pretty typical Putin, applauding himself for recent Russian successes, but it's made in the context of the 2012 Russian presidential election, in which Putin is expected to run against current president Dmitry Medvedev.

He's continued to emphasize the fact that Russia needs to become one of the world's top 5 economic powers by 2020.

From the speech (via Radio Free Europe):

In today's world, if you're weak, someone will surely come and give you advice on what direction you should take, what kind of policy you should pursue, and what path you should choose for your own development...And this, supposedly, well-meaning, unobtrusive advice may not seem that bad, but what's behind it is flagrant diktat and interference in the internal affairs of sovereign states.

http://goldsilver.com/news/putin-delivers-big-mocking-speech-of-us-debt-trade-balance-and-out-of-control-fed-%283%29/
Posted by Unknown at 7:22 PM