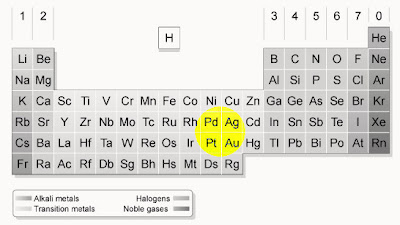 Besides Strontium (Sr), Silver (Ag) has the least amount of world reserves remaining. In a recent article on kitco commentaries, David Morgan put some highlights of what Adrian Douglas had stated in a recent interview about silver.

There’s very little left on the planet. The U.S. Geological Society said just a couple years ago that silver would be the first element in the periodic table that would become extinct. It’s incredibly bullish. The USGS said that would happen by 2020. So if we’re in the situation where we can run out of silver, the price clearly has to go up, because you can’t obviously run out of silver. What will happen is, the price will have to go to a price level where it’s economic to recycle it..

We have seen history in the making here. Normally whatever the government states, we know as of late is false. But here, we have some honesty from the USGS. Unfortunately, as energy becomes more expensive due to less net energy available due to a falling EROI ratio, even recycling will become expensive and prohibited. There will be plenty of challenges in the future for the modern technological society we live in as we transition to a world with less of everything right at the time when China and India are westernizing.
Posted by Unknown at 1:09 AM