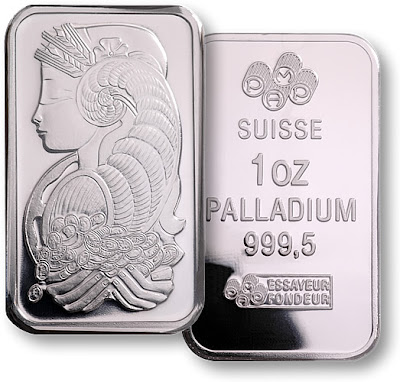 What made the Russians change their strategic mind regarding palladium, at a time when palladium price looks to be spiralling higher by the day? Do they no longer consider themselves a key palladium supplier to the world in the future?

The Russian riddle is solved when I noticed another less observed, but much more significant strategic move made by Norilsk Nickel. The story goes back to 2007 when Norilsk Nickel outbid Xstrata (XSRAY.PK) to acquire LionOre in an all cash offer worth more than US$6.5B. At the time, analysts could not understand why Norilsk Nickel paid such a high price for a mining company of limited mineral reserves. The answer became clear only recently, long after the LionOre acquisition, in a Bloomberg news story:

"We're considering switching from pyro-metallurgy to hydro-metallurgy based on Activox technology," Muravyov said. Within a year, the company will test whether the technology, which Norilsk bought in 2007 as part of its $6.5 billion LionOre acquisition, will be suitable for Arctic ores. Activox uses chemicals to dissolve nickel from concentrate and then produce the pure metal.

"The cost of applying Activox in Norilsk still needs to be evaluated," Muravyov said. Installing the technology at all of Norilsk Nickel's facilities, at a cost of as much as $10 billion, would allow the company to "remove all ecological problems and cut electricity and gas consumption," he said.

I suddenly had a eureka moment: The Activox Process, originally owned by LionOre, was the real reason for the Norilsk acquisition. The Norilsk Nickel mine, being one of the top ten most polluted places on earth due to sulphur dioxide and heavy metal emission from the smelters, and facing deteriorating nickel ore grade in coming years, desperately needs this new chemical-based metal producing technology that cuts pollution and production costs drastically.

Except for one catch. Platinum and palladium are very stable and extremely chemical inert metals. Therefore unlike nickel and copper which are easily dissolved, these two precious metals are virtually impossible to be leached from the mineral ores, using any chemical solution. A demonstration chart of the Activox Process confirms my intuition. The lower left corner of the flow chart indicates that the leach residue, containing the precious metals, are either simply disposed, or be send to alternative precious metal recovery process.

After base metals are extracted, the leach residue would contain virtually all of the original material from the mineral ores: rocks, sands, dirts grinded into fine powder, and wet with all the nasty chemicals mixed in during leaching. It probably contains no more than a few part per million precious metal content. Once again those precious metals: palladium and platinum, are chemically inert and can not be extracted efficiently using any chemical solution. The only way to process them is to use high temperature smelters, which bring back all the air pollution problem and high energy cost, problems that Norilsk wanted to solve in the first place, moving away from smelter based pyrometallurgy towards Activox Process based hydrometallurgy.

The inescapable conclusion is that Norilsk Nickel will become just a low cost nickel and copper producer, and will cease to produce palladium and platinum as byproducts, once they adopt the Activox Process.This is true unless palladium and platinum prices are driven to such high levels that it makes economic sense to try to recover the trace amount of precious metals contained in the leach residue despite of the high processing cost.

A technical paper discussing the Activox Process running at the Norilsk Nickel owned Tati plant in Botzwana, written by experts of that plant, confirms my conclusion. The 16 pages technical paper contains not a single word mentioning of either palladium or platinum: Solvent extraction design consideration for the Tati Activox® plant.

This shocking development is very bullish for palladium and is a very good news to fellow palladium investors. We are talking about 45% of the world's supply of palladium removed when Norilsk ceases to produce byproduct PGM metals. Of course, I do not expect this paradigm shift to occur overnight. But shouldn't it be time that precious metal investors leverage the opportunity to hoard the palladium metal and ride the palladium super bull up to the moon, and mean while industry users like GM (GM), FORD (F) and TOYOTA (TM) need to start to panic now and build their strategic palladium inventories before it is too late. If a 4% shortage was enough to drive rhodium's price from $300-ish to $11000 per ounce, I don't know how high palladium prices can go to if we have more than a 50% shortage in the global supply.

Maybe, just maybe, the recent remarkable surge of palladium price indicates that some investors out there have already figured out what the Activox Process means to Norilsk Nickel and to global palladium
supply, and are already quietly loading up while keeping their lips sealed.