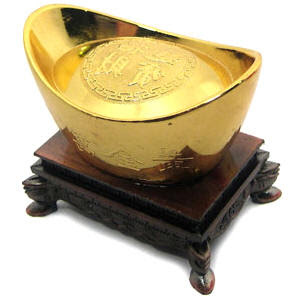 BEIJING - Gold's luster is continuing to attract rising domestic demand and China will continue to "outperform" other countries in private consumption of the precious metal, with sales growth remaining above 20 percent over the next two years, an industry expert said.

The amount individual buyers purchase as an investment is expected to surge two-fold annually, Zhang Bingnan, secretary-general of the China Gold Association, said.

And the government's gold reserves are "far from enough", and should be increased to fend off global financial risks, he said.

Since the international financial crisis China has led growth in gold sales worldwide.

This is set to continue in the coming years as the "average holding of gold by individuals is still too small and the nation's rapid economic growth will further stimulate consumption and investment", Zhang said.

"Demand for gold, mostly driven by investment, will grow at least 20 percent this year," he said.....read on
Posted by Unknown at 4:39 PM