How Bankers Own the Earth And Then Some... 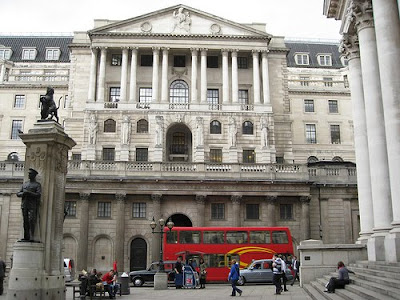 "Banking was conceived in iniquity and was born in sin. The bankers own the earth. Take it away from them, but leave them the power to create money, and with the flick of the pen they will create enough deposits to buy it back again. However, take away from them the power to create money and all the great fortunes like mine will disappear and they ought to disappear, for this would be a happier and better world to live in. But, if you wish to remain the slaves of bankers and pay the cost of your own slavery, let them continue to create money." -Josiah Stamp

It is just another fancy academic phrase to mask the true horror of what is happening to Greece. (And what will soon happen here.) This is like how "quantitative easing”is another name for forgery. You know, the act of counterfeiting a currency that was once punishable by death. Financial austerity is simply, more for the bankers and less for everyone else. Portfolios of the Elite must perform over all other human need. These bailouts come at a heavy price for the states that succumb to this financial rape. Real state assets and lands are sold at fire sale prices for to pay for debts created out of thin air. Real people’s lives will be destroyed to pay for debts created out of thin air. This of course is the true harvest time for the criminal bankers and their political enablers make it happen, by selling out their fellow citizens.

Many think that the bankers make money by lending money, but the real objective is the control they gain when when they confiscate Real assets with money that they never had

In our debt based monetary system, our money IS debt. When debt is created, money is created. When debt is paid off, money is destroyed. If you have ever wondered how everyone is in debt, look no further than this. Bankers gain power every time a debt is created, because it is their asset. Bankers don’t necessarily do this to make money, after all they freely give away all the money you want. What the bankers really want is control. Control over governments, businesses, states, towns, and ultimately you. They want everyone on a treadmill to work and produce real assets and labor so that their portfolio performs. The trick of this game is that there is no way out. We are on a treadmill that is going faster and faster because of one simple fact that is missing from everyone’s mind. Money/debt needs to be created every year in excess of the debt AND interest that was accrued the year before. In our debt based monetary system, our money is debt. Every dollar that comes into existence has a dollar of debt attached to it but NOT the money to pay for the interest attached on to it. This is the big trick, if only the principle is ever created, the only way for society to pay the interest due is to take more debt the next year.

Eventually, like the Boomers are finding out now, the system keeps growing more hungry for new debt and the people can no longer keep up. This leads to the end of consumerism, which slows corporate and business growth and need for debt. This leaves the spender of last resort, the government, to keep juicing the system. If the people will not spend the money, the state will. And the bankers LOVE state debt, because they can use the power of the state to enforce debt payments and seize once untouchable state assets. This has been the game all along for the bankers. Sure, they enjoyed their billions in bonuses and houses on the Hamptons, but now it is time to truly become masters of the universe.

During the collapse of the Soviet Union, a few Oligarchs seized more than half of ALL of the wealth in the former super power

They bought companies the size of Exxon Mobil for a few hundred million dollars. They bought huge tracts of land for nothing, to harvest incredible lumber and minerals. They bought media conglomerates and entire auto and aero industries for pennies on the dollar. The collapse of the Soviet Empire due to its inability to service the debts. This brought about the most amazing transfer of wealth the world has ever seen. Seeming overnight, former cab drivers and teachers became billionaires. Now before you think that these guys were self made men, they were not. They were front men for the Rothschilds and were given hard money and their own banks to go forth and buy assets for pennies on the dollars when there was no money. This is the same thing Greece is going through right now. Greece’s best lands and assets are being sold right now to Elitists for nothing. The Elite will then turn around and raise rates to the consumers and reap huge returns on investment. Again, all with money created out of thin air. What a sick system we have!

We already understand that debt is money and there is not enough money in existence to pay for the principle AND interest. (If all the debt in the world was paid off there would literally be NO money in the world. And we would still owe more for the interest due.) The key for the banker is that they get everyone in debt so that the can obtain title to all assets. Real assets assert real control, which is the ultimate end of the game. So how does one go about owning the earth and then some? The plan is quite simple, provided you have the right tools in place like fractional reserve banking, usury, and privately owned central banks.

This is the future of the our world

Short of a revolution, there is no stopping this on a national level. I encourage you to join the Sons of Liberty Academy to understand the big picture. It will help you to become mentally, financially, physically, emotionally and even spiritually prepared for this mathematically inevitable collapse. If you are looking for the best way to quickly prepare financially for this collapse, read the Silver Bullet and the Silver Shield.