Private pensions worth 30% less than three years ago

If only they had saved for their golden years in Gold instead of paper promises....... 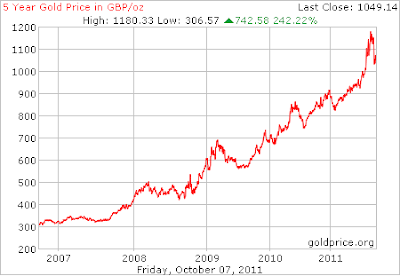 Overall pension incomes are now 30% lower than they were three years ago when the government began attempts to boost the economy through quantitative easing, according to accountants PricewaterhouseCoopers.

Peter McDonald, a partner in the pension practice at PwC, warned that those retiring this year would be left "between a rock and a hard place", forced to defer claiming a pension until the market picks up.

"Compared to only three years ago, a money purchase pension is now worth 30% less than it was," he told the Telegraph.

With stock market turmoil set to continue and this week's resumption of the Bank of England's quantitative easing programme, injecting another £75bn of new money into the economy, annuity payouts are set to shrink further.

The FTSE has fallen by about 15% since May, which has cut the value of many workers' private pensions schemes........read on
Posted by Unknown at 3:38 PM