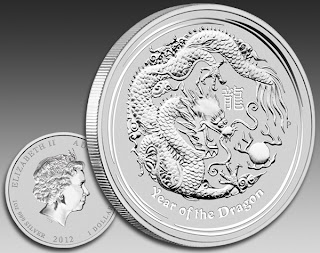 Chinese commercial banks are now selling silver to investors in the hundreds of tons. One example is the Industrial and Commercial Bank of China Ltd (ICBC), China's biggest lender which launched paper silver trading for individual investors in August of last year. The other large Chinese Banks have also introduced silver trading. The trading volume of ICBC's paper silver products alone reached 300 tons in the first half of 2011, almost four times the figure for the whole of 2010. That's right, one Chinese bank alone sold 300 tons or over 10.5 million ounces of silver in only 6 months. In only their first year of trading, ICBC bank alone will sell over 20 million ounces of silver which alone would represent over 2% of the total amount of silver mined on earth for the entire year.....read on
Posted by Unknown at 5:19 PM