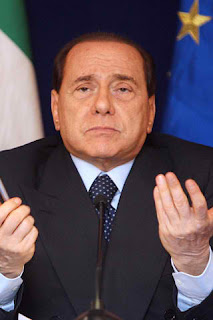 Italian Prime Minister Silvio Berlusconi fought off resignation rumours on Monday as borrowing rates hit a new record on the eve of a key test in parliament and as Europe stepped up pressure for reforms.

"Rumours of my resignation are baseless," Berlusconi said in a Facebook post following a rash of defections from his coalition and after a key ally said the 75-year-old billionaire's demise was "a matter hours, if not minutes."

In a stern warning to doubters from with his own ranks, Berlusconi told the newspaper Libero: "I want to look anyone who tries to betray me in the eyes."
Advertisement: Story continues below

The rumours triggered a rally on the stock markets, with the benchmark FTSE Mib index jumping almost 3.0 percent before falling to 1.66 per cent.

Market pressure has been unrelenting, with the yield on Italian 10-year government debt bonds rising to a euro-era record of 6.67 percent on Monday -- a level considered as unsustainable over the longer term.

The European Central Bank, which has been propping up Italy's debt market since August, was again forced to intervene on Monday, traders said.