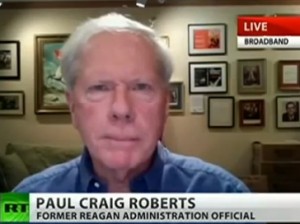 The Federal Reserve and its bullion bank agents (JP Morgan, Scotia, and HSBC) have been using naked short-selling to drive down the price of gold since September 2011. The latest containment effort began in mid-July of this year, after gold had moved higher in price from the beginning of June and was threatening to take out key technical levels, which would have triggered a flood of buying from hedge funds.

The Fed and its agents rig the gold price in the New York Comex futures (paper gold) market. The bullion banks have the ability to print an unlimited supply of gold contracts which are sold in large volumes at times when Comex activity is light.

Generally, on the other side of the trade the buyers of contracts are large hedge funds and other speculators, who use the contracts to speculate on the direction of the gold price. The hedge funds and speculators have no interest in acquiring physical gold and settle their bets in cash, which makes it possible for the bullion banks to sell claims to gold that they cannot back with physical metal. Contracts sold without underlying gold to back them are called “uncovered contracts” or “naked shorts.” It is illegal to engage in naked shorting in the stock and bond markets, but it is permitted in the gold futures market.

The fact that the price of gold is determined in a futures market in which paper claims to gold are traded merely to speculate on price means that the Fed and its bank agents can suppress the price of gold even though demand for physical gold is rising. If there were strict requirements that gold shorts could not be naked and had to be backed by the seller’s possession of physical gold represented by the futures contract, the Federal Reserve and its agents would be unable to control the price of gold, and the gold price would be much higher than it is now.

“Over a period of 10 weeks to begin the year, the Comex bullion banks were able to limit the rally to only 15% by supplying the “market” with 95,000 brand new naked short contracts. That’s 9.5MM ounces of make-believe paper gold or about 295 metric tonnes.

“Over a period of just 5 weeks in June and July, the Comex bullion banks were able to limit the rally to only 7% by supplying the “market” with 79,000 brand new naked short contracts. That’s 7.9MM ounces of make-believe paper gold or about 246 metric tonnes.” http://www.tfmetalsreport.com/comment/429940 [1]

In previous columns, we have documented the heavy short-selling into light trading periods.

The bullion banks do not have nearly enough gold in their possession to make deliveries to the buyers if the buyers decide to stand for delivery per the terms of the paper gold contract. The reason this scheme works is because the majority of the buyers of the contracts are speculators, not gold purchasers, and never demand delivery of the gold. Instead, they settle the contracts in cash. They are looking for short-term trading profits, not for a gold hedge against currency inflation. If a majority of the longs (the purchasers of the contracts) required delivery of the gold, the regulators would not tolerate the extent to which gold is shorted with uncovered contracts.

In our opinion, the manipulation is illegal, because it is insider trading. The bullion banks that short the gold market are clearing members of the Comex/NYMEX/CME. In that role, the bullion banks have access to the computer system used to clear and settle trades, which means that the bullion banks have access to all the trading positions, including those of the hedge funds. When the hedge funds are in the deepest, the bullion banks dump naked shorts on the Comex, driving down the futures price, which triggers selling from stop-loss orders and margin calls that drive the price down further. Then the bullion banks buy the contracts at a lower price than they sold and pocket the difference, simultaneously serving the Fed by protecting the dollar from the Fed’s loose monetary policy by lowering the gold price and preventing the concern that a rising gold price would bring to the dollar.

Since mid-July, nearly every night in the US the price of gold remains steady or drifts higher. This is when the eastern hemisphere markets are open and the market players are busy buying physical gold for which delivery is mandatory. But as regular as clockwork, following the close of the Asian markets, the London and New York paper gold markets open, and the price of gold is immediately taken lower as paper gold contracts flood into the market setting a negative tone for the day’s trading.

Gold serves as a warning for aware people that financial and economic trouble are brewing. For instance, from the period of time just before the tech bubble collapsed (January 2000) until just before the collapse of Bear Stearns triggered the Great Financial Crisis (March 2008), gold rose in value from $250 to $1020 per ounce, or just over 400%. Moreover, in the period since the Great Financial Collapse, gold has risen 61% despite claims that the financial system was repaired. It was up as much as 225% (September 2011) before the Fed began the systematic take-down and containment of gold in order to protect the dollar from the massive creation of new dollars required by Quantitative Easing.

The US economy and financial system are in worse condition than the Fed and Treasury claim and the financial media reports. Both public and private debt burdens are high. Corporations are borrowing from banks in order to buy back their own stocks. This leaves corporations with new debt but without income streams from new investments with which to service the debt. Retail stores are in trouble, including dollar store chains. The housing market is showing signs of renewed downturn. The September 16 release of the 2013 Income and Poverty report shows that real median household income has declined to the level in 1994 two decades ago and is actually lower than in the late 1960s and early 1970s. The combination of high debt and decline in real income means that there is no engine to drive the economy.

In the 21st century, US debt and money creation has not been matched by an increase in real goods and services. The implication of this mismatch is inflation. Without the price-rigging by the bullion banks, gold and silver would be reflecting these inflation expectations.

The dollar is also in trouble because its role as world reserve currency is threatened by the abuse of this role in order to gain financial hegemony over others and to punish with sanctions those countries that do not comply with the goals of US foreign policy. The Wolfowitz Doctrine, which is the basis of US foreign policy, says that it is imperative for Washington to prevent the rise of other countries, such as Russia and China, that can limit the exercise of US power.

Sanctions and the threat of sanctions encourage other countries to leave the dollar payments system and to abandon the petrodollar. The BRICS (Brazil, Russia, India, China, South Africa) have formed to do precisely that. Russia and China have arranged a massive long-term energy deal that avoids use of the US dollar. Both countries are settling their trade accounts with each other in their own currencies, and this practice is spreading. China is considering a gold-backed yuan, which would make the Chinese currency highly desirable as a reserve asset. It is possible that the Fed’s attack on gold is also aimed at making Chinese and Russian gold accumulation less supportive of their currencies. A currency linked to a falling gold price is not the same as a currency linked to a rising gold price.

The future will also determine whether the role of reserve currency has been overtaken by time. The US dollar took that role in the aftermath of World War II, a time when the US had the only industrial economy that had not been destroyed in the war. A stable means of settling international accounts was needed. Today there are many economies that have tradable currencies, and accounts can be settled between countries in their own currencies. There is no longer a need for a single reserve currency. As this realization spreads, pressure on the dollar’s value will intensify.

For a period the Federal Reserve can support the dollar’s exchange value by pressuring Japan and the European Central Bank to print their currencies with which to support the dollar with purchases in the foreign exchange market. Other countries, such as Switzerland, will print their own currencies so as not to endanger their exports by a rise in the dollar price of their exports. But eventually the large US trade deficits produced by offshoring the production of goods and services sold into US markets and the collapse of the middle class and tax base caused by jobs offshoring will destroy the value of the US dollar.

When that day arrives, US living standards, already endangered, will plummet. American power will have been destroyed by corporate greed and the Fed’s policy of sacrificing the US economy in order to save four or five mega-banks, whose former executives control the Fed, the US Treasury, and the federal financial regulatory agencies.