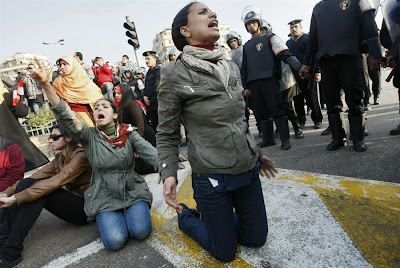 For the first time in human history almost all of humanity is politically activated, politically conscious and politically interactive... The resulting global political activism is generating a surge in the quest for personal dignity, cultural respect and economic opportunity in a world painfully scarred by memories of centuries-long alien colonial or imperial domination... The worldwide yearning for human dignity is the central challenge inherent in the phenomenon of global political awakening... That awakening is socially massive and politically radicalizing... The nearly universal access to radio, television and increasingly the Internet is creating a community of shared perceptions and envy that can be galvanized and channeled by demagogic political or religious passions. These energies transcend sovereign borders and pose a challenge both to existing states as well as to the existing global hierarchy, on top of which America still perches...

The youth of the Third World are particularly restless and resentful. The demographic revolution they embody is thus a political time-bomb, as well... Their potential revolutionary spearhead is likely to emerge from among the scores of millions of students concentrated in the often intellectually dubious "tertiary level" educational institutions of developing countries. Depending on the definition of the tertiary educational level, there are currently worldwide between 80 and 130 million "college" students. Typically originating from the socially insecure lower middle class and inflamed by a sense of social outrage, these millions of students are revolutionaries-in-waiting, already semi-mobilized in large congregations, connected by the Internet and pre-positioned for a replay on a larger scale of what transpired years earlier in Mexico City or in Tiananmen Square. Their physical energy and emotional frustration is just waiting to be triggered by a cause, or a faith, or a hatred...

Co-Founder of the Trilateral Commission

Member, Board of Trustees, Center for Strategic and International Studies

An uprising in Tunisia led to the overthrow of the country’s 23-year long dictatorship of President Ben Ali. A new ‘transitional’ government was formed, but the protests continued demanding a totally new government without the relics of the previous tyranny. Protests in Algeria have continued for weeks, as rage mounts against rising food prices, corruption and state oppression. Protests in Jordan forced the King to call on the military to surround cities with tanks and set up checkpoints. Tens of thousands of protesters marched on Cairo demanding an end to the 30-year dictatorship of Hosni Mubarak. Thousands of activists, opposition leaders and students rallied in the capitol of Yemen against the corrupt dictatorship of President Saleh, in power since 1978. Saleh has been, with U.S. military assistance, attempting to crush a rebel movement in the north and a massive secessionist movement growing in the south, called the “Southern Movement.” Protests in Bolivia against rising food prices forced the populist government of Evo Morales to backtrack on plans to cut subsidies. Chile erupted in protests as demonstrators railed against rising fuel prices. Anti-government demonstrations broke out in Albania, resulting in the deaths of several protesters.

It seems as if the world is entering the beginnings of a new revolutionary era: the era of the ‘Global Political Awakening.’ ......read on
Posted by Unknown at 9:22 PM