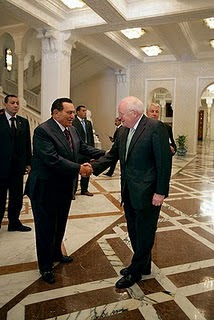 Cheney's comments came a day after President Barack Obama pressed Mubarak to consider his legacy and exit office in a way that would give his country the best chance for peace and democracy.

Cheney said the U.S. should take measured steps in public, and suggested that too much pressure could backfire.

"There is a reason why a lot of diplomacy is conducted in secret. There are good reasons for there to be confidentiality in some of those communications. And I think President Mubarak needs to be treated as he deserved over the years, because he has been a good friend," Cheney said at an event commemorating the centennial of President Ronald Reagan's birth.........read on