The Future Of Silver Mining 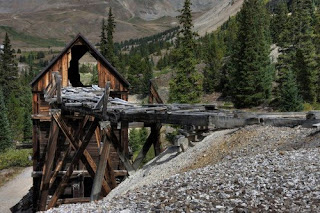 In my previous piece to this, I focused upon the definition of a "silver mine", in order to expose the biggest myth about silver: that having most of the world's silver produced as a "byproduct" of other mining is a normal state of affairs. What I demonstrated conclusively (through simple arithmetic) is that the only reason that most of the world's silver production doesn't come mostly from "primary" silver mines is purely a function of the price of silver (i.e the extremely low price).

More specifically, I pointed out how it was the relentless manipulation of the price of silver - which was kept far below its "fair market value" - that resulted in the "silver mine" becoming an "endangered species". In this commentary, I intend to build upon that analysis, by explaining the implications of that analysis with respect to the creation of new silver mines.

To understand this market-manipulation better, it's instructive to look at the history surrounding the "bottom" of the gold market. In this respect, there is no better place to start than with the observations made at that time by our good friends at GATA - the Gold Anti-Trust Action committee. On May 25, 1999; Bill Murphy had this to say, in a piece titled "Bottom in, bull market begins":

Gold continues to make 20-year lows led by the unending barrage of selling in the physical market by Goldman Sachs…Goldman Sachs has been relentless in its selling since right before the Bank of England's announcement and has not let up since…We told you two weeks ago that the word was out in London that Goldman Sachs has a 1,000-tonne short position on its books…

The "spot" price of gold on that date was $270/ounce, while the price of silver was just over $5/oz. The "announcement" which Bill Murphy alludes to is the infamous decision by future Prime Minister Gordon Brown to dump more than half of the UK's gold reserves onto the market at the absolute bottom (to bail-out Goldman Sachs?), costing his country billions of pounds.

At this price, the world's gold-mining industry was decimated. Well over 90% of the world's gold mines were forced to shut-down, as only the world's absolute "richest" deposits could even be mined on a break-even basis at that price. Indeed, this reality alone is conclusive proof of that manipulation. What is important to note, however, is that at no time has the world's gold production ever been produced primarily as a "byproduct". In other words, that industry was never destroyed to the same degree as silver mining.

In fact, Bill Murphy was slightly premature. The price of gold would actually decline to as low as $253/oz (approximately 6% below his call of a "bottom"), before rocketing upward more than 500% in the nearly 12 years since. My guess is that those investors who bought at $270/oz have forgiven Bill for being a little "early".

The absolute "bottom" of the silver market occurred much sooner, back in 1992, with the price briefly going as low as $3.65/oz, and it averaged an amazing $3.95 throughout that year. Why is this "amazing"? Because that price represented a 600-year "low" for the silver market.

Here it is important for us to focus on the gold/silver ratio. Regular readers know that in the nearly 5,000 years over which our species has mined and collected gold and silver that the average price ratio is 15:1. At silver's 600-year low, that ratio had been stretched to more than 80:1, while when gold was hitting its own lows the ratio was at a still-ridiculous level of roughly 60:1.

Put another way, when gold was at its absolute bottom (and 90% of the world's gold mines had been shut-down from this under-pricing), silver was priced at only ¼ of its predicted value - based on 5,000 years of human history. It is only upon absorbing all of this context that we can understand how ruthlessly the silver market (and silver miners) were wiped-out by this banker-manipulation.

The consequence of that manipulation is that in the 20 years since silver hit its bottom, anywhere from 2/3 to 4/5 of the world's silver has come as a "byproduct" of other mining, since only a handful of mines (out of 1,000's) were actually able to break-even with silver priced at that level. With the price of silver now nearly ten-fold higher than that absolute bottom, clearly the "pendulum" is swinging back. However, even at this price-level, the gold/silver price ratio remains in an extremely lop-sided range of more than 40:1.

With any/every reputable gold analyst still adamant that gold is "cheap" (i.e. under-priced) at this level, the question is: at what price-level will silver have to reach before that industry returns to a "healthy" state - i.e. where the vast majority of our silver is produced via primary silver mining, as was the case throughout the remainder of this 5,000-year period, and as is the case with gold?

This is more than just an "academic" question. Few investors understand the significance of silver being produced as a "byproduct" in relation to the fundamentals of supply and demand. In any/every mine where silver is produced as a byproduct, by definition this means that the majority of the revenues of any/every such mine are expected to come from the other metals being mined with silver. This means that the decision to build new mines (which produce silver as a byproduct) would be based upon not the price of silver, but the price(s) of the other metal(s).

This, in turn, means that throughout most (if not all) the years since silver hit its absolute bottom, the rising price of silver has done virtually nothing to "stimulate" higher silver production. This is something unheard of in the history of markets. A "commodity" rockets upward nearly 1000% in price, while producing virtually zero stimulative effect on supply.

This explains another extreme anomaly in the silver market: the price has rocketed upward by nearly 1000% while inventories continue to plummet. From 1990 to 2005, silver inventories plummeted by 90% while the price roughly tripled. At that point there was less available silver in the world than at any time in centuries (i.e. when humanity first acquired the technical savvy to mine it in large quantities).

Since 2005, we no longer have accurate numbers with which we can refer. As I have documented in several previous commentaries, the quasi-official "record-keepers" for the gold and silver mining industry (and very close chums of the banking community) have blatantly falsified and obfuscated the numbers to the point where they are totally meaningless. However, all empirical and anecdotal evidence is that silver inventories have never been as "tight" as they are today. An enlightening interview with the eminent fund-manager Eric Sprott establishes this clearly.

In other words, as of yet this 1000% rise in the price of silver has not produced any significant response from the silver mining industry - precisely what we would expect, since silver is still produced primarily as a byproduct. As long as most of the world's silver continues to be produced as a byproduct, exploding prices and collapsing inventories will continue to produce only a very muted response on the supply-side.

As I alluded to in a previous commentary, this provides investors with the rarest of investment opportunities: the "one-way trade" - where (over the long-term) the only possible direction for prices is higher. Inventories are gone at the same time demand is spiking. Indeed, just over the last five years, China has gone from being a net-exporter of roughly 100 million ounces of silver per year to a net-importer of 100 million ounces - a 200 million ounce per year surge in Chinese demand. This amounts to more than the total increase in mine-supply from 2000 right through the predicted increase in supply for this year.

Thus, looking at just this one nation, we see there is less silver available (in relative terms) today than there was in 2000 - and that is before we add-in any of the surge in industrial demand, and the even greater explosion in investor demand (excluding China). And with most silver produced as a byproduct, there is still no sign at all of this trend ending.

We are still several years away from reaching a stage where (like nearly all other commodities) the price of silver directly drives the production of silver. Until that happens, the only possible way to reduce demand to the point where severely-stressed inventories can merely remain in balance is much higher silver prices.

For those investing in silver miners, we are clearly in a Golden Age ("Silver Age"?). Any and every new silver miner to emerge (as this industry slowly rises from the dead) represents purely an investment opportunity, with no possibility over the foreseeable future that these "new producers" could over-supply this banker-starved market.

The typical "mine cycle" is close to ten years: the time it takes from beginning to explore (and drill-out) a deposit until mine-production actually begins. Thus a full response from the silver mining industry will not occur until as much as ten years after the silver market is finally being driven by "primary" mine production - which has still not occurred.

However, as mentioned before, there are literally thousands of old, closed silver mines - many of which still have sufficient ore remaining to re-commence production (once those mines are rehabilitated and modernized). The companies engaged in these reclamation projects represent not only a "short-cut" toward higher silver production, but wonderful investment opportunities.

Instead of the 10-year cycle to go from first exploration to production, some of these new miners can be in production only one to two years after first being listed on our exchanges. This means there is the potential for a more rapid response to demand than the expected near-decade. However, in even the most bearish assessment of these parameters, investors are assured of several more years of unparallelled growth for those investing in these companies. As always, we remind investors that the vast majority of "opportunities" (and the vast majority of gains) will occur with the "junior miners": small producers, who are generally producing less than 3 million ounces of silver per year.

Where could this market go? John Williams of Shadowstats.com is on record as saying that if real numbers were used for U.S. inflation since gold hit its previous, nominal high in 1980 that the price of gold would have to reach roughly $7,500/ounce - simply to equal that price in inflation-adjusted terms. With gold at that price, if silver merely equaled its long-term price ratio with gold that implies a silver price of $500/oz.

Because when the "pendulum" swings in markets it tends to swing too far, the vast majority of knowledgeable silver commentators are expecting the silver price to exceed that long-term price ratio. Because "fundamentals" for gold are much, much, much more bullish than in 1980, none of these numbers should be seen as an absolute "ceiling" for either gold or silver.

In fact, as the out-of-control money-printing of Western bankers continues to accelerate (with no end in sight) our economies become more and more irrevocably doomed to "hyperinflation" - where the prices of gold, silver, and many other hard assets will literally surge to infinite price levels, as expressed in the bankers' worthless paper.

Sadly (for all of us), the future of silver looks much too bright.