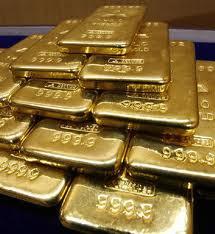 Gold is poised to climb the most in two years as prospects for additional economic stimulus by governments from the U.S. to China stoke demand for the precious metal as a bet against inflation, a survey showed.

Bullion for immediate delivery may reach $1,800 an ounce by the year-end, extending gains this year to 15 percent, according to the median forecast in the Bloomberg survey of 15 traders and analysts at a conference in Hyderabad in South India on Aug. 25. That would be the most since a 30 percent surge in 2010, data compiled by Bloomberg show.

Gold is set for a 12th year of gains as the European sovereign-debt crisis boosts haven demand amid speculation of further policy easing by central banks, including the U.S. Federal Reserve, which may be considering a third round of so- called quantitative easing, or QE3. Investment holdings have expanded to a record on demand for a hedge against inflation.

Read more
Posted by Unknown at 7:03 AM