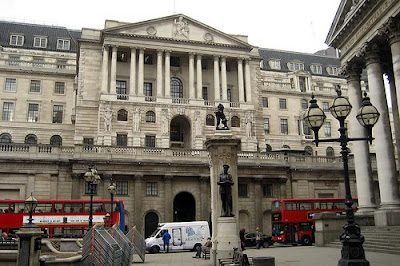 From the UK Telegraph: In a major position paper, Charles Bean (Deputy Governor) said that the Bank had been powerless to prevent what he called the "Great Contraction" of 2008 because control of interest rates was not, in itself, a powerful enough tool.
He also hinted that the days of quantitative easing may not be over: "The deleveraging process is incomplete, the recovery remains fragile and a considerable margin of spare capacity is yet to be worked off," he said. "Further policy action may yet be necessary to keep the recovery on track."

He was speaking at the Jackson Hole Economic Policy Symposium in America the day after the Federal Reserve chairman, Ben Bernanke, buoyed the markets with an upbeat assessment of the US's growth prospects.

Mr Bernanke also hinted that he was prepared to employ more asset purchases if necessary.....read on
Posted by Unknown at 5:28 PM No comments:

Printed paper does not equal wealth 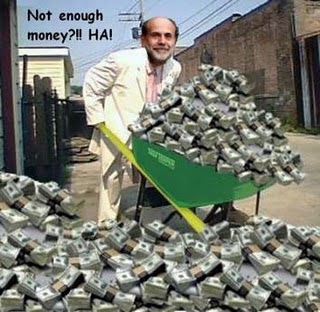 "Now a man can work a whole year and earn $40,000 (£25,000) and work hard for that. And now the government can in a millisecond print the same amount of money and that's what they do. So clearly paper money has now lost its function as a store of value."

The intellectually bankrupt Tokyo Roses of the gold world would have us believe that some form of gold (and silver) standard is not possible because there is supposedly not enough to go around. So why hasn't the unlimited supply of paper money solved our problems? Why was mankind able to function for centuries with such "limited" quantities of precious metals? Maybe because the less debt there is and the less asset inflation there is, the less need for money there is.

As Egon von Greyerz says, they can print in a millisecond what takes others a year to earn. The reality is that they can print the whole GDP of the world in a millisecond. Once people fully comprehend this reality the fat lady will have well and truly sung. Unfortunately the paid mercenaries of the fiat machine are outdone by us greater fools who are willing to part with our goods and services in return for their counterfeit paper.....read on

Bullion buying in China and India 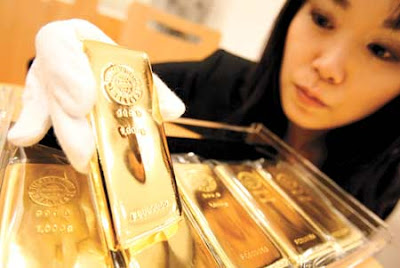 By Jeff Nielson: Starting with Mao, China's citizens were prohibited from purchasing bullion. It wasn't until 2002, that this total ban was partially lifted. However, small purchases of bullion were still not allowed. When you combine the (previously) small incomes of China's population with an official ban on small transactions, the effect of this decree was that gold was still totally out of reach for well over 90% of China's 1+ billion inhabitants.

It was only at the beginning of 2009 that all restrictions on bullion-buying by individuals in China were ended. From that time, it only took about one year for China's gold-buying to surge to a level where (depending on whose numbers you look at), China is either tied with India as the world's largest gold-consumer - or has already vaulted into top-spot.

Clearly, the single most-important driver for this demand was the lifting of prohibitions on bullion-buying, and yet that dominant factor has been almost completely overlooked by the precious metals community. Why do I continue to harp on this point?

Unlike the other drivers of demand mentioned (which are based upon current factors), the roughly 50-year ban on bullion-buying in China obviously created vast amounts of pent-up demand. Arguably, this pent-up demand must be satisfied first (since it predates those other drivers), before the Chinese market even begins to be driven by the other factors listed. However, even if you reject this "chronological" interpretation of Chinese demand, it clearly represents a major incremental addition to all the other demand-drivers.....read in full
Posted by Unknown at 8:03 AM No comments: