Supply and Demand in the Gold and Silver Futures Markets

The law of supply and demand is the basis of economics. Yet the price of gold and silver in the Comex futures market, where paper contracts representing 100 troy ounces of gold or 5,000 ounces of silver are traded, is inconsistent with the actual supply and demand conditions in the physical market for bullion. For four years the price of bullion has been falling in the futures market despite rising demand for possession of the physical metal and supply constraints. 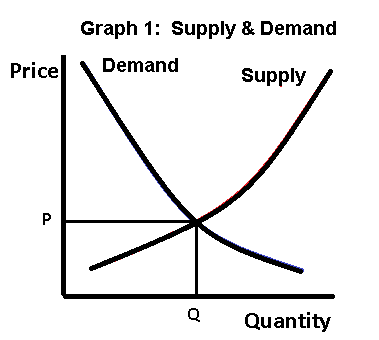 Changes in income and changes in tastes or preferences toward an item can cause the demand curve to shift. For example, if people expect that their fiat currency is going to lose value, the demand for gold and silver would increase (a shift to the right).

What can cause the price of gold to fall? Two things: The demand for gold can fall, that is, the demand curve could shift to the left, intersecting the supply curve at a lower price. The fall in demand results in a reduction in the quantity supplied. A fall in demand means that people want less gold at every price. (Graph 2) 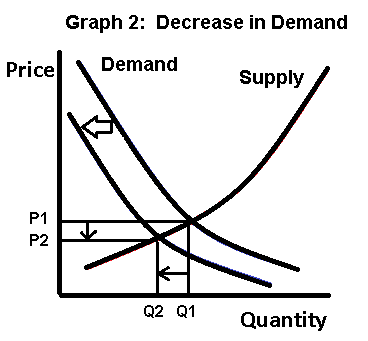 Alternatively, supply could increase, that is, the supply curve could shift to the right, intersecting the demand curve at a lower price. The increase in supply results in an increase in the quantity demanded. An increase in supply means that more gold is available at every price. (Graph 3) 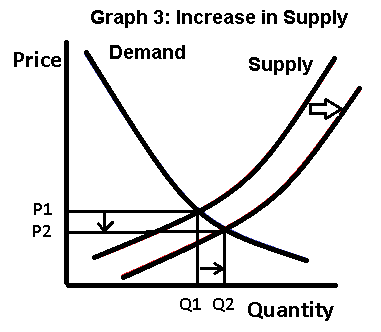 A decline in demand or an increase in supply is not what we are observing in the gold and silver physical markets. The price of bullion in the futures market has been falling as demand for physical bullion increases and supply experiences constraints. What we are seeing in the physical market indicates a rising price. Yet in the futures market in which almost all contracts are settled in cash and not with bullion deliveries, the price is falling.

For example, on July 7, 2015, the U.S. Mint said that due to a “significant” increase in demand, it had sold out of Silver Eagles (one ounce silver coin) and was suspending sales until some time in August. The premiums on the coins (the price of the coin above the price of the silver) rose, but the spot price of silver fell 7 percent to its lowest level of the year (as of July 7).

This is the second time in 9 months that the U.S. Mint could not keep up with market demand and had to suspend sales. During the first 5 months of 2015, the U.S. Mint had to ration sales of Silver Eagles. According to Reuters, since 2013 the U.S. Mint has had to ration silver coin sales for 18 months. In 2013 the Royal Canadian Mint announced the rationing of its Silver Maple Leaf coins: “We are carefully managing supply in the face of very high demand. . . . Coming off strong sales volumes in December 2012, demand to date remains very strong for our Silver Maple Leaf and Gold Maple Leaf bullion coins.” During this entire period when mints could not keep up with demand for coins, the price of silver consistently fell on the Comex futures market. On July 24, 2015 the price of gold in the futures market fell to its lowest level in 5 years despite an increase in the demand for gold in the physical market. On that day U.S. Mint sales of Gold Eagles (one ounce gold coin) were the highest in more than two years, yet the price of gold fell in the futures market.

How can this be explained? The financial press says that the drop in precious metals prices unleashed a surge in global demand for coins. This explanation is nonsensical to an economist. Price is not a determinant of demand but of quantity demanded. A lower price does not shift the demand curve. Moreover, if demand increases, price goes up, not down.

Perhaps what the financial press means is that the lower price resulted in an increase in the quantity demanded. If so, what caused the lower price? In economic analysis, the answer would have to be an increase in supply, either new supplies from new discoveries and new mines or mining technology advances that lower the cost of producing bullion.

There are no reports of any such supply increasing developments. To the contrary, the lower prices of bullion have been causing reductions in mining output as falling prices make existing operations unprofitable.

There are abundant other signs of high demand for bullion, yet the prices continue their four-year decline on the Comex. Even as massive uncovered shorts (sales of gold contracts that are not covered by physical bullion) on the bullion futures market are driving down price, strong demand for physical bullion has been depleting the holdings of GLD, the largest exchange traded gold fund. Since February 27, 2015, the authorized bullion banks (principally JPMorganChase, HSBC, and Scotia) have removed 10 percent of GLD’s gold holdings. Similarly, strong demand in China and India has resulted in a 19% increase of purchases from the Shanghai Gold Exchange, a physical bullion market, during the first quarter of 2015. Through the week ending July 10, 2015, purchases from the Shanghai Gold Exchange alone are occurring at an annualized rate approximately equal to the annual supply of global mining output.

Clearly the demand for physical metal is very high, and the ability to meet this demand is constrained. Yet, the prices of bullion in the futures market have consistently fallen during this entire period. The only possible explanation is manipulation.

As we have documented on a number of occasions (see, for example, http://www.paulcraigroberts.org/2014/12/22/lawless-manipulation-bullion-markets-public-authorities-paul-craig-roberts-dave-kranzler/ ), the prices of bullion are being systematically driven down by the sudden appearance and sale during thinly traded times of day and night of uncovered future contracts representing massive amounts of bullion. In the space of a few minutes or less massive amounts of gold and silver shorts are dumped into the Comex market, dramatically increasing the supply of paper claims to bullion. If purchasers of these shorts stood for delivery, the Comex would fail. Comex bullion futures are used for speculation and by hedge funds to manage the risk/return characteristics of metrics like the Sharpe Ratio. The hedge funds are concerned with indexing the price of gold and silver and not with the rate of return performance of their bullion contracts.

A rational speculator faced with strong demand for bullion and constrained supply would not short the market. Moreover, no rational actor who wished to unwind a large gold position would dump the entirety of his position on the market all at once. What then explains the massive naked shorts that are hurled into the market during thinly traded times?

The bullion banks are the primary market-makers in bullion futures. They are also clearing members of the Comex, which gives them access to data such as the positions of the hedge funds and the prices at which stop-loss orders are triggered. They time their sales of uncovered shorts to trigger stop-loss sales and then cover their short sales by purchasing contracts at the price that they have forced down, pocketing the profits from the manipulation

The manipulation is obvious. The question is why do the authorities tolerate it?

Perhaps the answer is that a free gold market serves both to protect against the loss of a fiat currency’s purchasing power from exchange rate decline and inflation and as a warning that destabilizing systemic events are on the horizon. The current round of on-going massive short sales compressed into a few minutes during thinly traded periods began after gold hit $1,900 per ounce in response to the build-up of troubled debt and the Federal Reserve’s policy of Quantitative Easing. Washington’s power is heavily dependent on the role of the dollar as world reserve currency. The rising dollar price of gold indicated rising discomfort with the dollar. Whereas the dollar’s exchange value is carefully managed with help from the Japanese and European central banks, the supply of such help is not unlimited. If gold kept moving up, exchange rate weakness was likely to show up in the dollar, thus forcing the Fed off its policy of using QE to rescue the “banks too big to fail.”

The bullion banks’ attack on gold is being augmented with a spate of stories in the financial media denying any usefulness of gold. On July 17 the Wall Street Journal declared that honesty about gold requires recognition that gold is nothing but a pet rock. Other commentators declare gold to be in a bear market despite the strong demand for physical metal and supply constraints, and some influential party is determined that gold not be regarded as money.

Why a sudden spate of claims that gold is not money? Gold is considered a part of the United States’ official monetary reserves, which is also the case for central banks and the IMF. The IMF accepts gold as repayment for credit extended. The US Treasury’s Office of the Comptroller of the Currency classifies gold as a currency, as can be seen in the OCC’s latest quarterly report on bank derivatives activities in which the OCC places gold futures in the foreign exchange derivatives classification.

The manipulation of the gold price by injecting large quantities of freshly printed uncovered contracts into the Comex market is an empirical fact. The sudden debunking of gold in the financial press is circumstantial evidence that a full-scale attack on gold’s function as a systemic warning signal is underway.

It is unlikely that regulatory authorities are unaware of the fraudulent manipulation of bullion prices. The fact that nothing is done about it is an indication of the lawlessness that prevails in US financial markets.

Paul Craig Roberts, Ph.D., is a former Assistant Secretary of the U.S. Treasury.

Dave Kranzler is a University of Chicago MBA and is an active participant in financial markets.
Posted by Unknown at 5:37 PM No comments:

China is stocking its vaults with Gold 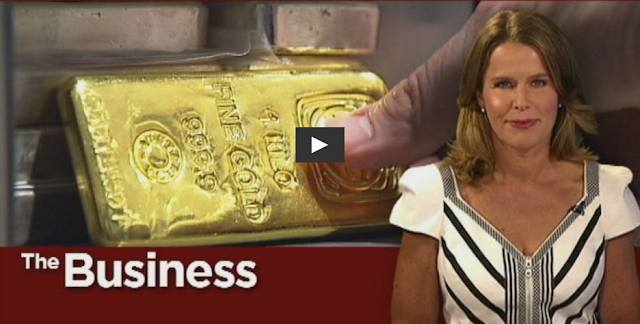