In this episode, Max Keiser and Stacy Herbert discuss the sound of one monkey-hand clapping as Alan Greenspan finger-painted the markets and grand heists ensued. In the second half of the show, Max Keiser talks to a former senior corporate and banking executive, David Smith, about Switzerland wearing concrete boots as it tries to maintain a currency peg to the euro with its only exit strategy being the Iraq one -- that is, they have no plan at all. They also discuss how HSBC might have missed the 7,000 suitcases of cash that would have been needed to launder $7 billion in drug cartel money.

John Hathaway on QE and Gold 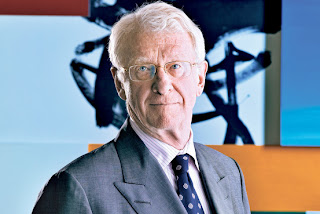 John Hathaway discusses the upcoming Fed's Jackson Hole meeting in reference to more QE and the resultant impacts expected on Gold. Listen to the KWN interview here
Posted by Unknown at 5:41 PM No comments:

Is the Recent Rally in Gold Stocks a Trap?

IBM's Uber-Powerful Watson... In Your Pocket

James Rickards, Senior MD at Tangent Capital expects a war against Iran. but not before the U.S. elections. He says China & Russia are growing, but thinks India & Brazil are facing problems.

Merkel Should Realize Europe Is A Sinking Ship

Martin Hennecke, Associate Director, Tyche says German Chancellor Angela Merkel should realize that Europe is a sinking ship and take Germany out of the Euro Zone.

A private collector bought the Hannibal Head Holey Dollar, which was shaped in New South Wales from a silver dollar minted in Peru in 1810.

The coin was the only privately owned version; the only other is housed in the State Library of New South Wales.

Its highest previous recorded auction price was $270,950 in 2008. The coin's shape came about when Governor Lachlan Macquarie, amid an acute colonial coin shortage, acquired 40,000 Spanish silver dollars. He enlisted the convicted forger William Henshall to cut a hole in the centre of each and stamp the doughnut with ''New South Wales'', the value five shillings and the date 1813.
Advertisement

When the colony of New South Wales was founded in Australia in 1788, it ran into the problem of a lack of coinage. Foreign coins – including British, Dutch, Indian and Portuguese - were common in the early years, but much of this coin left the colony by way of trade with visiting merchant ships.[1]

To overcome this shortage of coins, Governor Lachlan Macquarie took the initiative of using £10,000 in Spanish dollars sent by the British government to produce suitable coins in a similar manner to that described above. These coins to the value of 40,000 Spanish dollars came on 26 November 1812 on HMS Samarang from Madras,[2] via the East India Company.[3]

Governor Macquarie had a convicted forger named William Henshall cut the centres out of the coins and counter stamp them.[1] The central plug (known as a dump) was valued at 15pence (i.e., 1s 3d), and was restruck with a new design (a crown on the obverse, the denomination on the reverse), whilst the holey dollar received an overstamp around the hole ("New South Wales 1813" on the obverse, "Five Shillings" on the reverse). This distinguished the coins as belonging to the colony of New South Wales, creating the first official currency produced specifically for circulation in NSW.[3] The combined nominal value in NSW of the holey dollar and the dump was 6s 3p, or 25 percent more than the value of a Spanish dollar; this made it unprofitable to export the coins from the colony.

The project to convert the 40,000 Spanish coins took over a year to complete. Of the 40,000 Spanish dollars imported, 39,910 holey dollars and 39,910 dumps were made, with the balance assumed to have been spoiled during the conversion process.[4] The converted coins went into circulation in 1814.[1]

From 1822 the government began to recall the coins and replace them with sterling coinage.[3] By the time the holey dollar was finally demonetised in 1829, most of the 40,000 coins in circulation had been exchanged for legal tender and melted down into bullion.[1] Experts estimate that only 350 Holey dollars and 1500 dumps remain.[5] The rarity of the Australian holey dollar ensures that even those in relatively poor condition are valuable. There are many stories of holey dollars being found in unusual circumstances.[6]
Posted by Unknown at 4:07 PM No comments:

In today's Midday News we speculate about what the Federal Reserve Chairman (Ben Bernanke) may reveal during his speech from Jackson Hole. We discuss the rumour that JP Morgan may have a Derivative bet on Silver that is about to go south and we wonder what may be taking place on JP Morgan's Silver trading floor.

Bob Murphy on the debt crisis, the Great Depression, and gold