With ongoing revelations about the train wreck that is MF Global and the resultant run it has caused on other companies brokerage accounts it has again highlighted the evil of paper promises. I am sure no one in the last 5,000 years has described Gold or Silver as having the Devil in their details.

Thomas Rustici talks to Alasdair Macleod about the Fed and Gold

Thomas Rustici, Professor at George Mason University, and Alasdair Macleod, of the GoldMoney Foundation, talk about the European sovereign debt crisis and how it foreshadows similar problems in the USA. A central bank is a monopolistic, central planning agency, with all the implications that this has for the quality of its product.

This week Max Keiser and co-host, Stacy Herbert, discuss taxpayers in the West being pepper-sprayed with toxic debts while in China fraudsters receive five fingers of death. In the second half of the show, Max talks to Gregor Macdonald about Warren Buffett's investment in Japan and the cost benefit analysis of the energy policy of invading resource rich nations in order to liberate their oil.

From: Euronews  | Nov 24, 2011
http://www.euronews.net/ Germany's failed bond auction on Wednesday may lead to movement from Berlin on the subject of Eurobonds when France's Nicolas Sarkozy meets Angela Merkel today along with Italy's new leader Mario Monti.

Sigma X Hints Who The Next Contagion Target Is

Five months ago, when Italian yields were still tame in the 3% ballpark, and not 7% where they are today, we suggested that based on trading patterns and overall volume in Goldman's dark pool, Italy may be about to experience a "Greek episode." Days later we were proven right as Italian yields and spreads started their relentless move wider, with only those who had access to Sigma X being able to get an advance whiff of what was about to happen. Well today we are happy to report that the German diversion may have worked: the truth is that nobody appears to care about Germany. Instead what everyone does seem to care about, is the nation with the greatest combined debt (government, corporate and household) to GDP in the world. Yup. The UK.

And here is who is most active today:

GFC II on its way 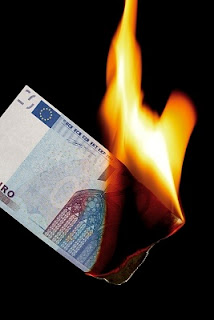 OUTGOING Commonwealth Bank chief executive Ralph Norris has warned that the European debt crisis has entered a dangerous phase, likening the current turmoil to the global financial crisis of three years ago.

His comments came as the leaders of the euro zone's key economies, France, Germany and Italy, met in France overnight to resolve differences over how to handle Europe's debt crisis.

But Mr Norris, who retires next Wednesday after more than six years in the role, cautioned that credit-crunch conditions were returning, which is threatening to choke off funding for banks around the world.

''This has potential to be significantly worse than the Lehman Brothers collapse and the subprime crisis because now we are talking about nation states,'' Mr Norris told BusinessDay.

''If you have a situation like you had today, where markets had effectively frozen, then it doesn't matter how good your name is, you are not going to be able to access markets,'' Mr Norris said. ''As of today, no banks could access these markets.''

2011 The Year of the Banksters and their Enablers

Former trader and television host Max Keiser talks with Alex about the implications of the MF Global fiasco.