“Just because you don't understand it doesn't mean it isn't so”
― Lemony Snicket, The Blank Book
Posted by Unknown at 9:51 PM No comments:

CS HFT DETECTION
Posted by Unknown at 1:17 PM No comments:

From The Silver Institute

(Washington, D.C. – December 13, 2012) China’s role in the global silver market has dramatically changed over the past decade. Once a small player in the global market, China today is the world’s leading market for both physical investment and paper trading of silver futures and other similar products, and is the second largest silver fabricator today. Chinese demand for the white metal is expected to achieve further strong growth in the years ahead, according to a report by Thomson Reuters GFMS released today by the Silver Institute.

Total silver demand in China has grown by over 100 million ounces (Moz) in the past ten years, to a record 170.7 Moz. The strength of the Chinese economy, assisted by a boom in the manufacturing sector, along with heavy investment in infrastructure, has boosted domestic demand for silver since the liberalization of the Chinese silver market at the start of 2000. This has propelled China into becoming the world’s second largest silver fabricator, with its share of global demand standing at 17 percent at the end of 2011. Overall silver fabrication demand has grown from 67.1 Moz to 159.5 Moz during the period 2002-2011, a rise of 137 percent.

In the same time period, Chinese industrial silver fabrication experienced an almost uninterrupted period of growth, posting an impressive 135 percent increase. The largest slice of industrial demand has come from the electrical and electronics sector, rising from 17.1 Moz in 2002 to 40 Moz last year. Key to this development has been a rapid expansion in the country’s semi-conductor sector. Similar growth across a wide range of applications has also occurred, including a surge in cell phone and computer production to account for 70 percent and 90 percent, respectively, of the global total last year. Additionally, strong advances have been reported in other personal electronic goods, including tablet computers, notebooks and light emitting diode backlit televisions.

Moreover, the Chinese silver jewelry market has grown an impressive 211 percent from 2002-2011, to 54.4 Moz, as it enjoys greater exposure across the country’s interior. Further growth is expected in coming years as ongoing urbanization should lead to the expansion of retail jewelry outlets in larger cities.

Investment demand from Chinese silver investors has jumped in recent years, making China the world’s biggest market for both physical investment and paper trading of silver futures and other similar contracts. Of note, during the first full year after the liberalization of the Chinese silver investment market in 2009, net demand for silver bars and coins doubled to 9.8 million ounces (Moz). In 2011, the figure soared to 17.0 Moz, accounting for 8 percent of global net purchases of silver bars and coins.

On the supply side, Chinese mine production has almost doubled over the last decade, assisted by the base metals mining sector, leading to a sharp rise in silver produced as a by-product. China’s mine production of silver now accounts for 14 percent of global supply, and it is likely to be recorded as the second largest silver producing country in 2012.

Scrap supply has also risen steadily over the same period, as Chinese industrial fabrication has grown rapidly, lifting supply from this segment to 31.9 Moz last year.

A notable increase in government sales from China was an important feature of the silver market from 1999 to 2003. Thereafter, sales from Chinese official and quasi-official stocks fell markedly, and the country has been essentially absent from the market since 2006.

“This report underscores China’s growing importance to the global silver market,” stated Michael DiRienzo, Executive Director of the Silver Institute. “It is impressive to see the dramatic development in so many sectors of their domestic silver market in the last decade,” he added.

The report gives a historical background of China’s silver industry over the past 30 years. It examines the deregulation of the Chinese silver market and includes chapters on Chinese silver supply, silver fabrication demand and silver investment, as well as silver imports and exports.

The report is available free of charge and can be downloaded from the Silver Institute’s web site: http://www.silverinstitute.org/site/wp-content/uploads/2012/12/ChineseSilverMarket2012.pdf

The Silver Institute is a nonprofit international association that serves as the industry’s voice in increasing public understanding of the many uses and values of silver. Established in 1971, its member companies include leading silver mining houses, refiners, bullion suppliers, manufacturers of silver products and wholesalers of silver investment products.

Argentinean society breaks down amidst 25% inflation 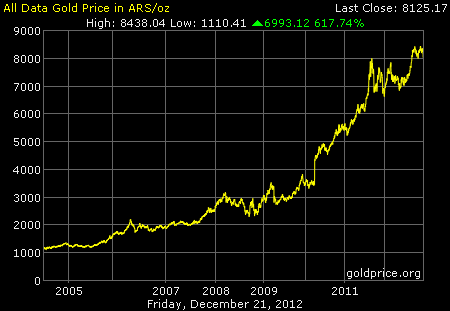 WE ARE LEGION: The Story of the Hacktivists

In this episode, Max Keiser and Stacy Herbert look at the the central bank revolution that will end in disaster with Japan leading the way after voters have demanded even more aggression with the nation's monetary policy. They also look at Moody's ratings getting no respect because nobody has done better than flipping a coin for 50 years in a slow burning prison. In the second half, Max Keiser talks to Peter Schiff about bonds, dollars and governments buying their own debt.