From: AssociatedPress  | Nov 21, 2011
Thwarted internationally, the Obama administration cobbled together a new set of best-available sanctions against Iran on Monday that underlined its limited capacity to force Tehran to halt its suspected nuclear weapons program.

Christmas tree made of pure gold

From: AssociatedPress  | Nov 21, 2011
On Tuesday, Tokyo jeweler Ginza Tanaka unveiled a Christmas tree made of pure gold worth 1.95 million dollars. The store says it's the most expensive Christmas tree they've ever created.

The topic of this week's show is Espionage and we talk to someone who is being one of world's biggest spy masters.

Also coming up on the show, the austerity measures for Obama, Sarkozy and the Saudi King, as they jet set from one five star hotel to another to discuss the world economic problems.

Russian warships off Syria, US carriers near Iran 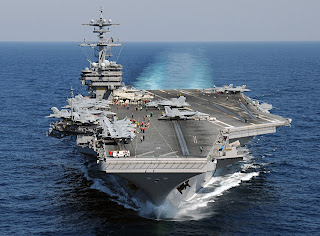 Big power gunboat diplomacy is in full spate in the Mediterranean and Persian Gulf. Washington is underscoring its military option against Iran's nuclear program, while Russia is demonstrating its resolve to prevent NATO attacking Syria after Libya and defending Bashar Assad's regime. Monday, Nov. 21,

Turkish Prime Minister Tayyip Erdogan, for his part, advised Assad: "You can only continue with tanks and guns to a certain point, the day will come when you will go."

Debkafile's military sources note that Russia and America adopted aggressive postures on Nov. 12, when two American carriers, the USS Bush and USS Stennis sailed through the Strait of Hormuz side by side and took up position opposite the Iranian coast.

That was also the day when a mysterious explosion at the Revolutionary Guards base near Tehran wiped out the entire leadership of Iran's ballistic missile program.

Those sources stressed the Russian ships would not anchor in the Syrian port, indicating that their mission was not just to show the flag for the Assad regime but was on operational duty along its coasts to resist any foreign intervention in Syria unrest.

Our military sources are watching to see whether the Russian flotilla targets the small craft transporting arms from Lebanon and Turkey to Syrian rebels fighting the regime. If so, Moscow would be able to present these strikes as actions against piracy which would fall under a UN Security Council resolution......read on
Posted by Unknown at 8:19 AM No comments:

Austrian banks told to limit lending to the east

If you want to access more of Webster's analysis his website is tarpley.net
From: RussiaToday  | Nov 21, 2011
Moscow has accused the west of stirring up tensions in the Arab world by calling for the overthrow of the Syrian regime. Russia says calls from certain states for the Syrian opposition to avoid dialogue with the government, are only provoking further violence. Author and journalist Webster Tarpley, who's in Damascus, says, it's very simple, western powers are behind the violence in Syria.