For those with a mathematical bent and a damn good memory......

A Brain Wallet refers to the concept of storing Bitcoins in one's own mind by memorization of a passphrase. As long as the passphrase is not recorded anywhere, the Bitcoins can be thought of as existing nowhere except in the mind of the holder. If a brainwallet is forgotten or the person dies or is permanently incapacitated, the Bitcoins are lost forever.

A Brain Wallet is created simply by starting with a unique phrase. The phrase must be sufficiently long to prevent brute-force guessing - a short password, a simple phrase, or a phrase taken from published literature is likely to be stolen by hackers who use computers to quickly try combinations. A suggestion is to take a memorable phrase and change it in a silly way that is difficult to predict.

The phrase is turned into a 256-bit private key with a hashing or key derivation algorithm (example: SHA256). That private key is then used to compute a Bitcoin address, or a deterministic sequence of addresses. This conversion can be done with a utility such as Casascius Bitcoin Utility or Electrum.

Bitcoins are sent to the address. In order to recover the Bitcoins, one must recompute the private key with the same phrase. The private key is imported into a wallet.

First, a phrase is chosen. "Man made it to the moon,, and decided it stinked like yellow cheeeese."

Note that the extraneous characters and broken grammar are intentional, this makes the passphrase harder to attack.

End result: Bitcoins sent to this address are accessible to someone who knows the original phrase. The extraneous characters, of course, must be remembered intact.
Posted by Unknown at 5:24 PM 1 comment:

Alex Jones on why Judge Andrew Napolitano was fired

$6 Trillion in fake US Bonds seized 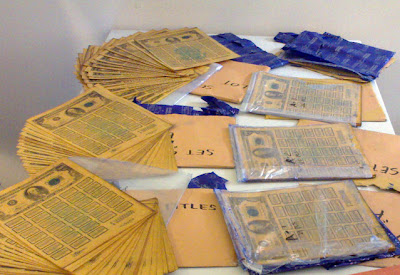 What this story doesn't explain is how these "fake" bond differ from "real" bonds pretending to represent money? What do the real ones have nicer engravings of dead blokes on them or something?

The bonds were found hidden in makeshift compartments of three safety deposit boxes in Zurich, the prosecutors from the southern city of Potenza said in an e-mailed statement. The Italian authorities arrested eight people in connection with the probe, dubbed “Operation Vulcanica,” the prosecutors said.

The U.S. embassy in Rome has examined the securities dated 1934, which had a nominal value of $1 billion apiece, they said in the statement. “Thanks to Italian authorities for the seizure of fictitious bonds for $6 trillion,” the embassy said in a message on Twitter.

The financial fraud uncovered by the Italian prosecutors in Potenza includes two checks issued through HSBC Holdings Plc (HSBA) in London for 205,000 pounds ($325,000), checks that weren’t backed by available funds, the prosecutors said. As part of the probe, fake bonds for $2 billion were also seized in Rome. The individuals involved were planning to buy plutonium from Nigerian sources, according to phone conversations monitored by the police.

Read more
Posted by Unknown at 11:50 AM No comments:

Could Moody's and the Greek CDS time-bomb take down the "Goodfellas of Wall Street?"

Michel Chossudovsky on the Syrian War