Book the funeral.....the hole has been dug 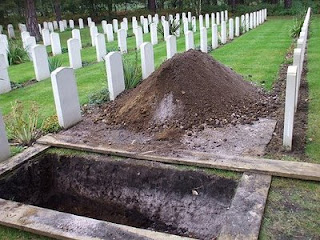 That is correct, book the funeral, because if common sense and the free market are not allowed to resurrect themselves, we are destined to fall into the hole we have created. A hole which we have now realised was not the foundation of a perpetual consumer-driven jacuzzi but the final touches of a dark and ugly economic grave.

The exuberance of the past decade not only fast forwarded consumption on the back of cheap money and lax lending standards, but it also spawned production, retail, lending, housing and employment paradigms that were bound to hit a brick wall.

The teaser rates and falsified borrowing applications came to an end as rates adjusted and the owners defaulted. With them, the house prices to which everyone's personal ATM was attached, started to collapse and this in turn reversed consumption. This set off a shrinkage in employment, which then destroyed asset prices and hence the solvency of banks once mortgages went underwater. The spiral continues.

Greece is close to (formally) defaulting and others may well follow because the deficits and debts of nations have for years ceased to represent investments in civil society. Instead they have been vote buying sprees to secure the approval of the unwashed masses and to enrich the economic titans through corporate welfare and reduced regulation so they could enrich themselves even more so by transforming citizens into consumer serfs.

Governments everywhere created positions and gave nose bleed increases and unbelievable pension benefits which in turn created households with expectations and commitments based on unsustainable incomes. The jobs, pensions and lifestyles of policemen, teachers and firemen are now being decimated.

We saw the repeal of the Glass-Steagall Act, the outright "ignoral" of Brooksley Born in relation to over the counter derivatives, a multiplicity of toxic financial products and the SEC decision in 2004 to allow just 5 firms to lever up to 30 and even 40 to 1, instead of the previous rules that limited broker dealers debt to net capital ratio to 12-to-1.

These changes were loopholes on the way in and will now (no doubt) be defences on the way out for the scoundrels that gamed the system.

Globalisation also played its part in magnifying the downturn. No doubt it is good in theory but only where the world functions on the principal of trade and financial transactions being both sustainable and mutually beneficial.

This has clearly not been the case as we have seen massive imbalances in trade and unchecked borrowings across borders which have been complicated by rivalries, armed conflicts and lack of consensus on the political level. Which nation, in any case, is willing to reduce its trade surpluses so as to benefit a deficit neighbour?

Derivatives which were once the icing on the corporate cake will turn out to be asbestos powder that will magnify the final unravelling.

Prior to World war II, Hitler's Germany started to rearm itself in violation of the Treaty of Versailles and then proceeded to mobilise troops in the French occupied German territory of the Rhineland. Rather than stomp on the rise of Hitler, the indecisive French and English adopted a policy of appeasement that allowed Hitler to gain traction. The rest is now history.

A market left to its own devices will cleanse itself through higher rates, tighter lending standards and failure of the weakest parts. The process is ugly but effective.

Just ask yourself why US house sizes went from an average of 1400 square feet in 1970 to 2900 square feet in 2009 despite the size of households dropping from just over three in 1960 to about 2.6 in 2010. This translates very roughly to 150% more housing per head of population (if you have not been evicted).

The US is not alone with the number of vacant properties in Spain and China being equally alarming.

The list of malinvestments goes on and on and one has only to look at the proliferation of fast food outlets, self-storage places and armed conflict (without end) to realise that the whole show was not about reasoned investment but more about extreme financialisation of any activity which could yield bonuses for bankers and even greater wealth for those that had no need for more.

The more they try to reverse the decline with these strategies, the greater the final reckoning.

The baby boomers have not only created the problem, they are also making it worse. It is also clear that they have no plan whilst still expecting the young to buy their McMansions and share portfolios as well as pay for their social security and Medicare.

The baby boomers by right are not entitled to any Social Security. Their contributions were spent on wars and pork barrelling.

Contradictions abound when one considers that the Obama Administration continues the spending policies of the Bush era whilst Greece, Italy, Portugal and Ireland are subjected to austerity.

Even more contradictions are apparent when one considers that margin requirements for gold and silver go up even when the price is receding, and the margin requirements for shares go down even when their prices go up. Chairman Greenspan could not spot a property bubble in the making but the CME and others can spot a bubble in precious metals. You don't need a nose to sense the stench.

The only advice I can offer is for you to take hold of the gold and silver railing around that gaping hole IF you can get your hands on it. Otherwise, I am warning you.........the edges are slippery.

Let's pray for a miracle because any plan that does not contain real and fairly distributed pain is a fraud on the future and an outright fraud on the young to which the future belongs.

The People will only take so much

A very powerful and graphic video pointing out Western hypocrisy.

Spectator I: I think it was "Blessed are the cheesemakers".
Mrs. Gregory: Aha, what's so special about the cheesemakers?
Gregory: Well, obviously it's not meant to be taken literally; it refers to any manufacturers of dairy products.
Mrs. Big Nose: [trying to hear Jesus' sermon on the mount] Oh, it's blessed are the MEEK! Oh, I'm glad they're getting something, they have a hell of a time.

To paraphrase my late grandfather "you wouldn't feed any of them" in reference to the IMF, World Bank and EU Central Bank. Gee we cut wages, increased taxes and unemployment and for some unknown reason the Greek economy shrunk, those animal spirits are so unpredictable.

Posted by Unknown at 1:00 AM No comments:

Brilliantly silly video - a must watch for all Silver Bugs.