Australia, where gold grows on trees

A CSIRO study shows that gold has been absorbed by gum trees in the region of Kalgoorlie, Western Australia.

Diamonds will need to continue to sit on the sidelines, waiting to be called off the bench to perform as a physically-backed investment vehicle.

The irony of what’s keeping diamonds from becoming a physically-backed commodity is that the uniqueness in each diamond is one driving factor that propels the price upwards, and is also what’s holding it back.

“I applaud the attempt(s), but I don’t see the vehicle working,” Zimnisky told Kitco News. “I don’t see what they can do to make it work because the underlying fundamental issue is that physical diamonds are not fungible, they’re not price transparent.

“There’s a reason we don’t have one right now and it’s because diamonds lack fungibility, they all have different characteristics, different values, they’re individually graded,” Zimnisky said. “You’re trying to create a fungible asset out of something that’s not (fungible), you’re forcing the issue, and, when people buy an ETF, they buy it because there’s pricing transparency, there’s liquidity and you’re just not going to have that.”

There are several different ways to grade diamonds, which poses a significant obstacle. Zimnisky pointed out that there’s no spot market for diamonds. He also noted that there’s varying opinion over what diamond prices actually are.

Read more
Posted by Unknown at 5:33 PM No comments:

Gold and Silver bounce on poor US jobs report

Gold and Silver bounced overnight on poor US Jobs data, crushing any further talk of the Fed easing off on the monetary accelerator for the foreseeable future. As of writing both metals are up a suspiciously similar 1.96% 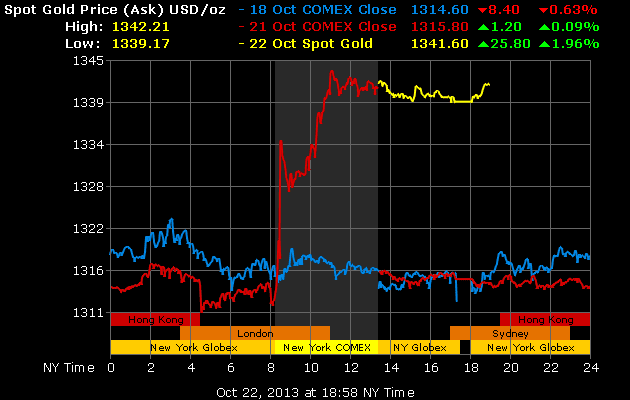 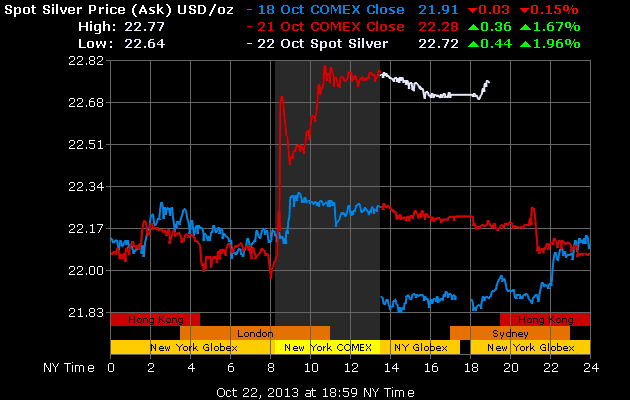 Charts from goldprice.org
Posted by Unknown at 11:19 AM No comments:

As you very well know, the business environment for gold producers has been extremely challenging over the past few years. While demand for physical gold remains extremely strong, prices on the COMEX have fallen precipitously. This contradictory situation is the single most important obstacle to a healthy gold mining industry.

In my opinion, the massive imbalance between supply and demand is not reflected in prices because available statistics are misleading. It is not the first time that GFMS (and World Gold Council) statistics have come under pressure from the investment community. In his now celebrated “The 1998 Gold Book Annual”, Frank Veneroso demonstrated the inconsistencies in GFMS gold demand data and proceeded to show how they grossly underestimated demand. The tremendous increase in the price of gold over the following years vindicated his conclusions.

For very different reasons, we are now at a similar pivotal point for gold. Over the past few years, we have seen incredible incremental demand from emerging markets. Indeed, so much so that the People’s Bank of China has announced that it is planning to increase the number of firms allowed to import and export gold and ease restrictions on individual buyers.1 In India, the government has been fighting a losing battle against gold imports by imposing import taxes and restrictions.2 Moreover, Non-Western Central Banks from around the world are replacing their U.S. dollar reserves by increasing their holdings of gold.3

But, demand statistics reported by the World Gold Council (WGC) consistently misrepresent reality, mostly with regard to demand from Asia.

To illustrate my point, Table 1 below contrasts mine production with demand from some of the world’s largest gold consumers. According to WGC/GFMS data, the world will mine, on an annualized basis, about 2,800 tonnes of gold for 2013.

But, I adjusted these figures to reflect mine production from China and Russia, which never leaves the country and is used solely to satisfy domestic demand. After adjustments, we have a total world mine supply of about 2,140 tonnes. On the demand side, I make some in-house adjustments to better represent demand from emerging markets. To proxy for gold consumption in China, Hong Kong, India, Thailand and Turkey, I use net imports of gold, as reported by their various governmental agencies. While imports might in general be an imperfect proxy for demand, those countries see very little re-export of what they import and keep most of it for themselves, so it is not unreasonable to assume that what they import they “consume”, on top of their domestic production. To this I add the demand, as estimated by the GFMS, from other countries and that of central banks. I annualized the year-to-date figures and found that for this year, annualized total demand is approximately 5,200 tonnes. On that basis, “core” annualized demand is approximately 3,000 tonnes more than mine supply.

Sources: GFMS data comes from the WGC’s “Gold Demand Trends” publications for 2013 Q1 & Q2. Chinese mine supply comes from the China Gold Association and is up to August 2013, the annualized number is a Sprott estimate.5 Russian mine supply comes from the WBMS (Bloomberg ticker WBMGOPRU Index) and is for 2012, 2013 statistics are still unavailable. Chinese data is taken from the Hong Kong Census and Statistics Department and covers the period Jan.-Aug. 2013 and is annualized to account for the 4 missing months to the year. Changes in Central Bank gold reserves are taken from the IMF’s International Financial Statistics, as published on the World Gold Council’s website for 2013 Q1 & Q2 and include all international organizations as well as all central banks. Net imports for Thailand, Turkey and India come from the UN Comtrade database and include gold coins, scrap, powder, jewellery and other items made of gold. The data is for 2013 Q1 & Q2. ETFs data comes from Bloomberg’s ETFGTOTL Index.

However, these figures also exclude what the GFMS dubs “OTC investment and stock flows”, which is a name for a simple plug because no one really knows what is traded in the OTC market. Also, to remain conservative and avoid possible double counting, I exclude the category “technology” from my demand estimate, which the WGC/GFMS estimates to be about 400 tonnes a year.6 Certainly, some of this demand is captured by the demand numbers for China, Turkey, India or Thailand, but it is near impossible to disentangle them. Nonetheless, it should be kept in mind that my demand estimate is conservative and probably understated by a few hundred tonnes.

Of course, another important source of supply is gold recycling, which the GFMS estimates at about 1,300 tonnes for the year. However, this number is questionable at best as gold recycling is hard to estimate. But, most importantly, a large share of it is probably done in India and China, which as mentioned before do not re-export their gold. In the context of my analysis, recycling from those countries should therefore be excluded from the total supply number.

The real incremental source of supply this year has been the flows out of ETFs. According to data compiled by Bloomberg, and as shown at the bottom of Table 1, ETFs have seen outflows of approximately 724 tonnes year-to-date. On an annualized basis, this represents an additional supply of 917 tonnes. But, this incremental supply is only temporary. As shown in Figure 1 below, ETF holdings of gold seem to have stabilized at around 1,900 tonnes after a rapid decline in the first few months of 2013.

The evidence presented here is clear, demand for physical gold is extremely strong and, in reality, without the massive outflows from ETFs (half of world mine supply), it is hard to imagine how this demand would have been met. Since ETFs have a finite size (about 1,900 tonnes left), these outflows cannot continue for much longer (see our article on the topic).7 All these observations point to a considerable imbalance between supply and demand (unless Western Central Banks decide to fill this void with what is left of their reserves). If recycling was reduced by one half (China, India and Russia) and the temporary sales from ETFs were excluded, demand could be as high as 5,185 tonnes versus supply of 2,140 tonnes. The supply-demand imbalance is obvious to all.

FIGURE 1:TONNES OF GOLD IN ETFS

As was the case when Frank Veneroso first published his book in 1998, the GFMS methodology understates demand and the World Gold Council, by using data from the GFMS, misleads the market place.

To conclude, I urge the leaders of the World Gold Council, for the benefit of their own members, to improve the quality of their data and find alternative sources than the GFMS, which paints a misleading picture of the real demand for gold. This lack of quality information has certainly been one of the driving factors behind the lack of investors’ confidence towards gold as an investment. Gold has been one of the best performing asset classes since 2000, and the World Gold Council should be promoting it accordingly.

Eric Sprott
Posted by Unknown at 9:49 AM No comments:

In this episode of the Keiser Report, Max Keiser and Stacy Herbert, discuss the bandits, banksters and brokers who will have taken all that we have got. No dollar, euro, yen or drachma will be left behind. And inflation, deflation and confiscation will take every last nickel and dime. They also discuss Americans turning their bodies into cash machines as they start selling off various organs to make ends meet. In the second half, Max interviews economist and professor, Constantin Gurdgiev, about Bail-Ins, Bail-outs and Troikas. They also discuss 'second-rate' Britain and a de-Americanizing rest of the world.