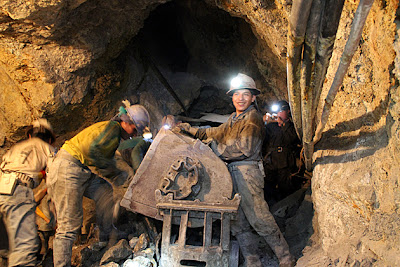 At over 4,000 metres above sea level, Potosí in Bolivia is the world’s highest city. But it is overshadowed by the rainbow-coloured Cerro Rico, or Rich Hill, which looms above the citizens – an imposing reminder of the cause of the city’s splendour and horror. The city was founded in 1545 following the discovery of silver in the Cerro Rico, the veins of which proved to be the world’s most lucrative, bankrolling the Spanish Empire for more than two centuries.

Many roads lead to hell, and I follow a miner to the Candelaria Bajo mine, one of the oldest of the 700 mines in Cerro Rico, which dates back at least 350 years. Like the millions who have gone before me, I take a last look at the sun and then enter the underworld through a low, dark entrance, stained black with llama blood, the remnants of a sacrifice to the devil. Miners are extremely superstitious.

It is no wonder. Cerro Rico held extraordinary quantities of the precious metal – it is said that at one time you could have built a silver bridge from Potosí to Spain and still have enough silver to carry across it – but this came at a terrible cost. Eight million workers died during the 350 years of Spanish occupation. And by the 1800s, the silver was depleted and its global price diminished, sending the city into a decline that it is only recently recovering from, thanks to the demand for tin, lead and zinc.

Cerro Rico is emblematic of a wider malaise. Global reserves of silver are diminishing rapidly, and supplies could run out as soon as 2029. That is, if we consume silver at the rate we are today and no new deposits are found, according to Mansoor Barati, a metals production and refinery expert at the University of Toronto. The reality is that rising silver prices will make exploration become more cost-effective and new deposits are likely to be found, but even then Barati’s prognosis is grim. "Silver will last longer,” he says, “but not beyond this century."

As it becomes scarcer, the price of silver has rocketed up, from less than $5 an ounce in 2000 to $48 in April 2011 (currently, it is fetching around $32 an ounce). So Cerro Rico still draws silver miners into its black heart, killing them on average before the age of 35 – from silicosis, mesothelioma, accidents, and poisonings from the various noxious chemicals they are exposed to, including cyanide, mercury and carbon monoxide.

The air I breathe when I enter the dark and dusty mine is infused with a peculiar smell – a caustic combination of the many chemicals here. I stumble along, crouching under the low rocks, trying to forget that 10 years ago geologists predicted that the mountain, riddled with tunnels and crevices, would collapse within 8-10 years. I bash my head frequently, alternatively grateful for my hard hat and cursing it for falling down over my eyes and obscuring my view of obstacles. I struggle to mount a rock just in time as a series of steel trollies come speeding down the tracks towards us, pushed and pulled by ghostly men, wide-eyed from coca.

The air becomes impossible to breathe through my scarf as I continue deeper and further into the mine, and it becomes harder to see with every step. Soon I am reduced to crawling on hands and knees through tunnels tight enough to panic in, and still we descend.

Sliding down a hole we reach a lower level, where workers with mad staring eyes push and pull trolleys laden with tonnes of rock past us, seemingly not noticing our presence. I am a couple of kilometres inside the mountain now and it is stiflingly hot, lung-searingly difficult to breathe and incredibly exhausting – and I am not even working.

For their efforts, those toiling in these sought-after cooperatives can earn an average of 1,500 Bolivianos a week (£150/$225); those working alone usually earn a great deal less. It all depends on the quantity and quality of the minerals they produce.

Where precious silver was used mainly in coins and jewellery (and later in photography), its industrial uses now outstrip the decorative market. Silver has the highest electrical (and thermal) conductivity of any metal, so it is used in a range of electronics – including sensitive radio frequency antennae, particularly at VHF (very high frequency), such as found in televisions and mobile phones, and in radio frequency identification (RFID) devices. Silver is also found in many printed circuit boards, in hearing aids and in batteries.

The medicinal properties of silver bullets have been known since at least the times of Hippocrates, the Ancient Greek “father of medicine”, and rely on its toxic effects on pathogens, including bacteria and fungi. Silver ions kill pathogens by binding to proteins in their cells, making silver compounds ideal for use in antiseptics and wound dressings. Nanoparticles of silver are even woven into socks and other clothing to reduce bacterial and fungal growth – and the odours that arise. Silver is also used in heart valves and catheters, and researchers are now investigating silver's potential in killing cancer cells.

One solution to dwindling reserves is to recycle the silver already in circulation. A tonne of ore usually contains less than 3 grams (0.1 ounces) of silver; whereas a tonne of discarded mobile phones (6,000 handsets) can contain 3.5 kilograms (7.7 pounds) of silver, according to United Nations University experts.

Clearly, replacement materials are also needed. "As a surface coating, silver could be replaced by aluminium or rhodium, which is itself expensive, or by complex metal oxides, which are good conductors," suggests Peter Edwards, professor of inorganic chemistry at Oxford University. Other applications could use copper or silver-plated copper, or palladium alloys.

Finding replacements for medical applications might be more tricky. For instance copper also has an antiseptic quality – it is being used in hospital door handles to replace aluminium and reduce the spread of germs, and in water filters to prevent Legionnaires’ disease. But copper can be neurotoxic, so it is not used in implants or wound dressings, says Alan Lansdown, an expert in medicinal uses for silver at Imperial College London. "There aren't really any effective and safe replacements for silver, except synthetic antibiotics," he says.

So, with potential alternatives in short supply, and while the price is high and there is still some silver left in the ground, desperate people like those at Cerro Rico will continue to burrow for it.

After what feels like an entire day, but is in fact just an hour and a half, I emerge from Cerro Rico, blinking into the sunlight. Gasping the cold fresh air, I am grateful to be alive, but the dusty mine has taken my voice, I have to shower for 20 minutes to clean off the grime and my clothes stink of the underworld.

For me, it was a brief foray. I simply cannot imagine having to work in those conditions for 12-14 hours, sometimes doing a double night-shift, and for years. Children work in these mines from the age of 9 or 10. There are no middle-aged men, only widows shovelling rocks outside.

Gaia is a science writer and broadcaster who is particularly interested in how humans are transforming planet Earth and the impacts our changes are having on societies and on other species. She has visited people and places around the world in a quest to understand how we are adapting to environmental change. You can follow her adventures at www.WanderingGaia.com and on Twitter at @WanderingGaia.
Posted by Unknown at 1:27 PM 1 comment: