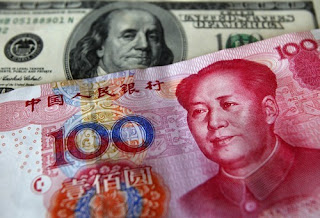 By Michael Snyder of The Economic Collapse blog

On the global financial stage, China is playing chess while the U.S. is playing checkers, and the Chinese are now accelerating their long-term plan to dethrone the U.S. dollar. You see, the truth is that China does not plan to allow the U.S. financial system to dominate the world indefinitely. Right now, China is the number one exporter on the globe and China will have the largest economy on the planet at some point in the coming years.

The Chinese would like to see global currency usage reflect this shift in global economic power. At the moment, most global trade is conducted in U.S. dollars and more than 60 percent of all global foreign exchange reserves are held in U.S. dollars. This gives the United States an enormous built-in advantage, but thanks to decades of incredibly bad decisions this advantage is starting to erode. And due to the recent political instability in Washington D.C., the Chinese sense vulnerability. China has begun to publicly mock the level of U.S. debt, Chinese officials have publicly threatened to stop buying any more U.S. debt, the Chinese have started to aggressively make currency swap agreements with other major global powers, and China has been accumulating unprecedented amounts of gold. All of these moves are setting up the moment in the future when China will completely pull the rug out from under the U.S. dollar.

Today, the U.S. financial system is the core of the global financial system. Because nearly everybody uses the U.S. dollar to buy oil and to trade with one another, this creates a tremendous demand for U.S. dollars around the planet. So other nations are generally very happy to take our dollars in exchange for oil, cheap plastic gadgets and other things that U.S. consumers "need".

Major exporting nations accumulate huge piles of our dollars, but instead of just letting all of that money sit there, they often invest large portions of their currency reserves into U.S. Treasury bonds which can easily be liquidated if needed.

That is why a U.S. debt default would be such a big deal. A default would cause interest rates to skyrocket and the entire global economic system to go haywire.

Unfortunately for us, the U.S. debt spiral cannot go on indefinitely. Our debt is growing far, far more rapidly than our GDP is, and therefore our debt is completely and totally unsustainable.

The Chinese understand what is going on, and when the dust settles they plan to be the last ones standing. In the aftermath of a U.S. collapse, China anticipates having the largest economy on the planet, more gold than anyone else, and a respected international currency that the rest of the globe will be able to use to conduct international trade.

And China is not just going to sit back and wait for all of this to happen. In fact, they are already doing lots of things to get the ball moving. The following are 9 signs that China is making a move against the U.S. dollar...

#1 Chinese credit rating agency Dagong has downgraded U.S. debt from A to A- and has indicated that further downgrades are possible.

#2 China has just entered into a very large currency swap agreement with the eurozone that is considered a huge step toward establishing the yuan as a major world currency. This agreement will result in a lot less U.S. dollars being used in trade between China and Europe...

The swap deal will allow more trade and investment between the regions to be conducted in euros and yuan, without having to convert into another currency such as the U.S. dollar first, said Kathleen Brooks, a research director at FOREX.com.

"It's a way of promoting European and Chinese trade, but not doing it with the U.S. dollar," said Brooks. "It's a bit like cutting out the middleman, all of a sudden there's potentially no U.S. dollar risk."

#3 Back in June, China signed a major currency swap agreement with the United Kingdom. This was another very important step toward internationalizing the yuan.

#4 China currently owns about 1.3 trillion dollars of U.S. debt, and this enormous exposure to U.S. debt is starting to become a major political issue within China.

#5 Mei Xinyu, Commerce Minister adviser to the Chinese government, warned this week that if the U.S. government ever does default that China may decide to completely stop buying U.S. Treasury bonds.

#6 According to Yahoo News, China has already been looking for ways to diversify away from the U.S. dollar...

There have been media reports this week that China's State Administration of Foreign Exchange, the body that handles the country's $3.66 trillion of foreign exchange reserve, is looking to diversify into real estate investments in Europe.

#7 Xinhua, the official news agency of China, called for a "de-Americanized world" this week, and also made the following statement about the political turmoil in Washington: "The cyclical stagnation in Washington for a viable bipartisan solution over a federal budget and an approval for raising debt ceiling has again left many nations' tremendous dollar assets in jeopardy and the international community highly agonized."

#8 Xinhua also said the following about the U.S. debt deal on Thursday: "[P]oliticians in Washington have done nothing substantial but postponing once again the final bankruptcy of global confidence in the U.S. financial system". The commentary in the government-run publication also declared that the debt deal "was no more than prolonging the fuse of the U.S. debt bomb one inch longer."

#9 China is the largest producer of gold in the world, and it has also been importing an absolutely massive amount of gold from other nations. But instead of slowing down, the Chinese appear to be accelerating their gold buying. In fact, money manager Stephen Leeb says that his sources are telling him that China plans to buy another 5,000 tons of gold. There are many that are convinced that China eventually plans to back the yuan with gold and try to make it the number one alternative to the U.S. dollar.

So exactly what would happen if the Chinese announced someday that they were going to back their currency with gold and would no longer be using the U.S. dollar in international trade?

It would change the face of the global economy almost overnight. In a previous article, I described some of the things that we could expect to see happen...

If China does decide to back the yuan with gold and no longer use the U.S. dollar in international trade, it will have devastating effects on the U.S. economy. Demand for the U.S. dollar and U.S. debt would drop like a rock, and prices on the things that we buy every day would soar. At that point you could forget about cheap gasoline or cheap Chinese imports. Our entire way of life depends on the U.S. dollar being the primary reserve currency of the world and being able to import things very inexpensively. If the rest of the world (led by China) starts to reject the U.S. dollar, it would result in a massive tsunami of currency coming back to our shores and a very painful adjustment in our standard of living. Today, most U.S. currency is actually used outside of the United States. If someday that changes and we are no longer able to export our inflation that is going to mean big trouble for us.

The fact that we get to print up giant mountains of money and virtually everyone around the world uses it has been a huge boon for the U.S. economy.

When that changes, the word "catastrophic" is not going to be nearly strong enough to describe what is going to happen.

According to a Rasmussen Reports survey that was released this week, only 13 percent of all Americans believe that the country is on the right track. But the truth is that these are the good times. The American people haven't seen anything yet.

Someday people will look back and desperately wish that they could go back to the "good old days" of 2012 and 2013. This is about as good as things are going to get, and it is only downhill from here.
Posted by Unknown at 11:23 PM No comments:

Weekend Chillout - They are all Guilty

With Barry signing off on a deal that allows the US to continue to spend money the markets have bounced back, and even gold and silver are shinning brighter. Although we all know that all that has been achieved is that the guilty have been let free to again cause havoc with other peoples money. 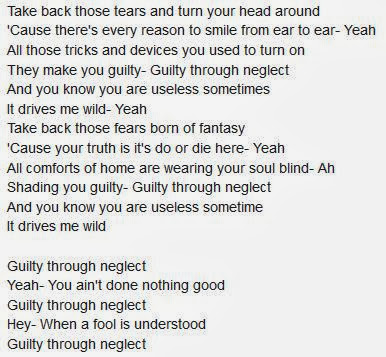