Posted by Unknown at 5:11 PM No comments:

I can't wait to see this movie, hopefully the powerz don't shut it down. Martin Armstrong's bio

2. Our nation began its existence in debt after borrowing money to finance the Revolutionary War. President Andrew Jackson nearly eliminated the debt, calling it a "national curse." Jackson railed against borrowing, spending and even banks, for that matter, and he tried to eliminate all federal debt. By Jan. 1, 1835, under Jackson, the debt was just $33,733.

3. When World War II ended, the debt equaled 122 percent of GDP (GDP is a measure of the entire economy). In the 1950s and 1960s, the economy grew at an average rate of 4.3 percent a year and the debt gradually declined to 38 percent of GDP in 1970. This year, the Office of Budget and Management expects that the debt will equal nearly 100 percent of GDP.

4. Since 1938, the national debt has increased at an average annual rate of 8.5 percent. The only exceptions to the constant annual increase over the last 62 years were during the administrations of Clinton and Johnson. (Note that this is the rate of growth; the national debt still existed under both presidents.) During the Clinton presidency, debt growth was almost zero. Johnson averaged 3 percent growth of debt for the six years he served (1963-69).

5. When Ronald Reagan took office, the U.S. national debt was just under $1 trillion. When he left office, it was $2.6 trillion. During the eight Regan years, the US moved from being the world's largest international creditor to the largest debtor nation.

8. The U.S. national debt rises at an average of approximately $3.8 billion per day.

9. The US government now borrows approximately $5 billion every business day.

10. A trillion $10 bills, if they were taped end to end, would wrap around the globe more than 380 times. That amount of money would still not be enough to pay off the U.S. national debt.

12. The U.S. government has to borrow 43 cents of every dollar that it currently spends, four times the rate in 1980.

Read more
Posted by Unknown at 2:30 PM No comments:

Moody's negative outlook for the UK

Inside Story - Can the UN quell Syria's unrest?

An Arab League proposal to deploy peacekeepers in Syria, which is gathering momentum. Could this proposal work on the ground? Will Russia and China soften their positions in the UN?

Hyperinflation often shows up most obviously in public transport, in the case of Zimbabwe public transport cost rose to a point where the dilly bus fare exceeded the daily wage of government health workers. Of course this meant those workers refused to go to work at hospitals and clings resulting in the breakdown of public health and a cholera epidemic. The only ones that could save themselves were corrupt politicians and those that could pan enough gold to buy clean food and water.

Clarke and Dawe - Rattling Through the Key Issues

Russia’s top military boss says an attack against Iran, which the west suspects of developing nuclear weapons, could begin as early as summer.

Thus far, tensions between Tehran and the west have been confined to the battlefield of heated rhetoric. Russia’s highest ranking military officer, however, predicts it may be just a matter of time before the verbal grenades get real.

"Iran is a sore spot,” Makarov noted.“I think a decision will be made by the summer."

If Makarov is correct in his estimations, the situation in the region – overwhelmed as it is with political crises and war – could spin rapidly out of control. Indeed, some are warning that an attack on Iran could trigger a dangerous game of dominoes across the Middle East, possibly even culminating in another world war.

In the slide towards escalating violence, there have been a string of disturbing incidents, including alleged cyber attacks against Iran, as well as the downing of a sophisticated US drone, which Iran says it guided to the ground after electronically hacking into the vehicle.

Then there are the mysterious assassinations.

In January, Mostafa Ahmadi Roshan, 31, who supervised a department at the Natanz uranium enrichment facility, was killed by a car bomb in northern Tehran.

Exactly two years earlier, Masoud Ali Mohammadi, a senior physics professor at Tehran University, was killed when a bomb-rigged motorcycle exploded beside his car as he was about to leave for work.

In the latest ratcheting up of tensions, Israel on Monday blamed Iran for masterminding attacks against Israeli embassies in Tbilisi and New Delhi.

This game of tit-for-tat can readily explode into all-out conflict, which would be a worst-case scenario not just for the region, but for the entire world.

Read more
Posted by Unknown at 11:11 AM No comments:

America's Lawless Empire: The Constitutional Crimes of Bush and Obama

Ralph Nader '58 and Bruce Fein '72 visited Harvard Law School for a talk sponsored by the HLS Forum and the Harvard Law Record. At the event, "America's Lawless Empire: The Constitutional Crimes of Bush and Obama," both men discussed what they called lawless, violent practices by the White House and its agencies that have become institutionalized by both political parties.

Chris Whalen: JPM and the Banks Have the MF Global Money And the Status Quo Is Protecting Them

"But please, to our friends in the Big Media, could we stop saying that we don't know the location of the missing $1.6 billion of client funds from MF Global? The money is safe and sound at JPM and other counterparties. As with Goldman Sachs et al and American International Group, the banks have been bailed out at the cost of somebody else. And the various agencies of the federal government are complicit in the fraud...

The effort by former New Jersey governor and MF Global CEO Jon Corzine to save his firm by stealing customer funds seems to warrant further discussion, yet instead we have silence...

So why is it that the Large Media have such trouble reporting this story? The fact seems to be that the political powers that be in Washington are protecting JPM CEO Jamie Dimon from a possible career ending kind of stumble with respect to MF Global." 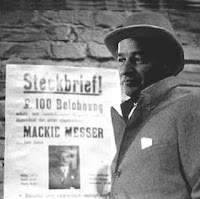 Chris Whalen at The Institutional Risk Analyst lays out the entire MF Global scandal in a few plain words, taking the Wall Street demimonde to task in the process.

It is nice to see that someone who occasionally appears on the mainstream media can tell the truth on this. Usually one has to look for sources overseas, small cafes, and the occasional economic maverick to hear what really happened.

But in quiet whispers, the Street knows the truth, that the money was stolen, not once but twice.   And even these hard cases are shocked.  The first time by MF Global and from the very top, and then afterwards in the courts and the regulatory bodies that used the bankruptcy to take the funds from the customers and give them to the creditors.

And it does stink to high heaven. But the clean up men are giving the evidence a thorough scrubbing while justice waits, Chicago-style.

It has placed a chill on those trading in the US markets. Even they are frightened of such lawlessness. They can't help but wonder, who's next?   And how far will they go?

Please distribute this as widely as possible.

"Where is the lost customer money? At JP Morgan Chase and other banks, or course. See, "How JP Morgan and George Soros Ended Up with MF Global Customer Money", www.clearingandsettlement.com. 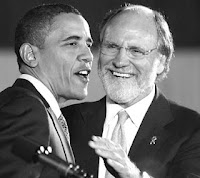 So why is it that the Large Media have such trouble reporting this story? The fact seems to be that the political powers that be in Washington are protecting JPM CEO Jamie Dimon from a possible career ending kind of stumble with respect to MF Global. By stuffing the commodity customers of the broker dealer via an equity bankruptcy resolution supervised dutifully by SIPIC, JPM and Soros apparently get to benefit at the expense of the commodity customers of MF Global. This situation stinks to high heaven and everyone on the Street we've spoken to about the matter knows it. As the article above notes:

"Rather than being treated as a bankruptcy of a commodities brokerage firm under sub-chapter IV of the Chapter 7 bankruptcy law, MF Global was treated as an equities firm (sub-chapter III) for the purposes of its bankruptcy, and this is why the MF Global customer money in so-called segregated accounts "disappeared".

The effort by former New Jersey governor and MF Global CEO Jon Corzine to save his firm by stealing customer funds seems to warrant further discussion, yet instead we have silence.

Here's a question: When is Corzine going to be indicted for securities fraud and other high crimes and misdemenors? The answer seemingly is that the Obama Justice Department is afraid to go there. Thus the fraud at MF Global continues and Washington does nothing to inconvenience the banksters as customer funds are expropriated.

But please, to our friends in the Big Media, could we stop saying that we don't know the location of the missing $1.6 billion of client funds from MF Global? The money is safe and sound at JPM and other counterparties. As with Goldman Sachs et al and American International Group, the banks have been bailed out at the cost of somebody else. And the various agencies of the federal government are complicit in the fraud."

"But where says some is the king of America? I’ll tell you Friend, he reigns above, and doth not make havoc of mankind like the Royal Brute of Britain. Yet that we may not appear to be defective even in earthly honors, let a day be solemnly set apart for proclaiming the charter...that in America the law is king. For as in absolute governments the king is law, so in free countries the law ought to be king; and there ought to be no other."


"And remember, where you have a concentration of power in a few hands, all too frequently men with the mentality of gangsters get control. History has proven that."

Crucifixion is too good for them

Silver and Platinum lead the way in 2012

Silver has taken the lead in year to date performance, followed closely by it's equally shinny cousin Platinum. 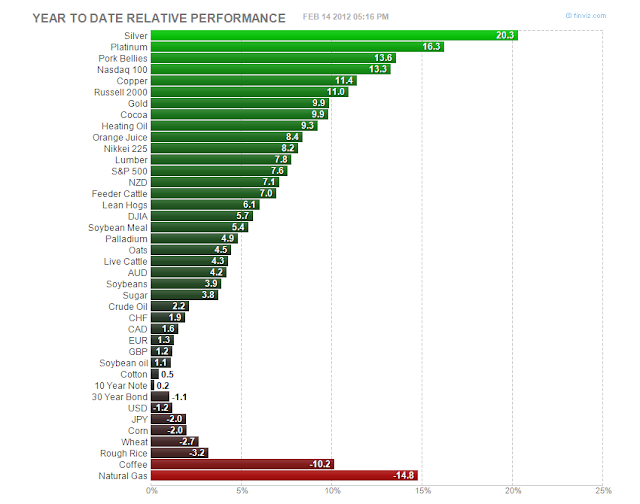 Iran war heats up on the streets of Bangkok