QEs Effect on Equities and Gold

Veteran market commentator Jim Grant discusses the recent non-stop chatter from the Fed and affect on the Gold market. Listen to the KWN interview here
Posted by Unknown at 10:17 PM No comments: 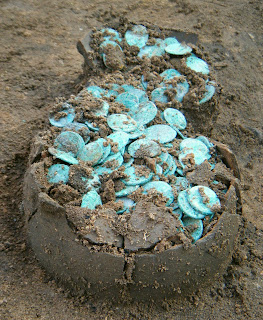 To address the excess of debt in the world, four courses for action were mentioned:

The debt burden could be reduced by paying it down, via a policy of increased taxation.

The debt burden could be reduced by a policy of allowing mass bankruptcies to take place, which would write off substantial portions of the debt.

The debt burden could be reduced by a policy of massive monetary inflation which would devalue all debts and make them payable.

Alternatively, the intolerable debt burden and its absolutely inevitable reduction, nolens volens, would probably be achieved by a combination of all three policies.

In the intervening five years, the world’s excessive debt burden has not been reduced; on the contrary, it has increased. The governments of the world have behaved ostrich-like, burying their heads in the sand to ignore the problem, adopting infantile “extend and pretend” policy to debt and allowing further increases in debt in the hopes of spending their way out of difficulties by adding more debt to existing debt.

What can we expect of all governments in the world, today?

Not one single government is going to raise taxes to pay off debt. Such policy is contrary to the prevailing Keynesian religion. Besides, the debt burden is so gigantic that the idea of paying it down is out of the question. Governments are not even capable of raising taxes to prevent increases in debt, let alone to pay it down. So the first policy mentioned above, is out.

A drastic reduction of the world’s debt burden by cancellation of debt would require its cancellation at national, state, municipal, corporate and individual levels. Cancelling debts means simultaneous cancellation of assets, because every debt is someone’s asset. Massive cancellation of debt would be extremely painful and the last thing that democratic governments want is to inflict pain. Therefore, a process of reducing world debt could not come about by any plan or agreement; it would have to be ignited by some financial fire breaking out, and governments are quite alert to the least signal of fire and will proceed to extinguish any such accident by all means. We may as well forget about cancellation of debt as a remedy for the excessive debt burden weighing on the world -though accidents do happen.

The fact remains: the world’s excessive, un-serviceable and un-payable debt shall be reduced; this is an unavoidable event, as unavoidable as the force of Gravity.

Therefore, what we will see, from here on, is the world’s great slide into the third avenue for policy: massive inflation of the money supply. We are given notice that the slide is now seen as imperative policy: it is announced as “Whatever It Takes”. See zerohedge.com (click here). Now, inflation is not painful like paying taxes or seeing your financial assets go up in smoke. For the majorities, inflation is downright pleasant, like sniffing cocaine or shooting heroin. It is only in the advanced stages of inflation that its painful effects become apparent. So this is unquestionably the policy that will be implemented to deal with excessive debt in the world.

Take Mexico as an example. In 1970 Mexico began an inflationary party that only ended twenty years later; in the meantime, the rate of exchange went from $12.50 pesos to the dollar, to $3,100 pesos to the dollar. Consequently, by 1990 Mexico was quite free of internal debt. When the US applies such a program, the effect will be to cancel world debt, since all debt in the world is tied to the dollar as the reserve currency of the world.

We have only limited knowledge regarding what massive monetary inflation really means. Those who are going to apply it know only some of the effects, not all of them. There remain the known-unknowns, and besides these, the unknown-unknowns. Thus the hand that will implement massive inflation trembles in doubt. Yet, there is no other recourse.

The world will plunge into the darkness of massive world inflation. There is no other alternative. It must take place, but what will happen then is obscure. We are going into uncharted waters.

Massive monetary inflation in the world will cause massive social disruption, which will give rise to political revolution. The inflation will end at some point. We can only conjecture about what sort of political organizations will prevail when the inflation ends. It is not likely that “Democracy” as we have known it will survive. More likely, Democracy as the present touch-stone for legitimate government will give place to Dictatorship, under the force of circumstances.

When the Barbarians invaded the Roman Empire, frightened Romans hid away their treasure in the form of silver and gold. These treasures are still being discovered today.

In the coming world-uncertainty and fear, humans will adopt the same measures spontaneously, and a flight into gold and silver will take place.

Perhaps some investments in some parts of the world may survive the great purge which is to take place. But, which investments, and where? Nobody can tell us this, with any certainty.

The ruins of the Roman city of Volubilis are situated in what was once the Roman province of Morocco; 1,300 years ago, when the then Christian citizens of Volubilis perceived the imminent menace of Muslim conquest, those who could do so buried their silver. Their little treasures are still being dug up amid the ruins of Volubilis. Alas, their foresight was of no avail to those good citizens of long ago.

To store away gold and silver is one of the important things that humans can do to face the upheavals of the coming New Barbarism. Such foresight provides no certainty, but at least it is a reasonable attempt to prepare for the future with some instrument for survival.
Posted by Unknown at 3:17 AM No comments: