After a campaign throughout 2012 to seek clarity in regards to the location of Australia's Gold Reserves the Reserve Bank of Australia (RBA) has confirmed today in an email to me that 99.9% of their Gold Reserves are held in the gold vault of the Bank of England.

Please read below for the text of the RBA's email response to me dated 19/12/12:

Thank you for your email.

London is a major global gold trading market and the Bank of England provides a secure and cost-effective storage location for central banks and market participants. The Reserve Bank has processes in place to ensure that the gold reserves are maintained appropriately. It is not considered necessary from management, security or operational  perspectives to relocate the gold bars to a facility in Australia.

The Reserve Bank has reviewed its approach to releasing details about its management of the physical reserves of gold and decided to release the above information.

Please note that we answered your previous questions as a routine public enquiry.  The FOI Act concerns itself with the release of documents, rather than answering questions, so a request must seek documents to be valid.

I would like to thank Bullion Baron for their assistance in this matter and the encouragement and support of management and several clients of ABC Bullion, Sydney.

If you wish to view some of the gold stored in the Bank of England gold vault and see probably one of Australia's gold bars (the bar handled in the video made in Australia) watch this recent video tour of the vault.

Published on Dec 18, 2012
Just two weeks before the 'fiscal cliff' deadline, President Obama and House Speaker John Boehner are swapping offers of major compromise in hopes of a deal to slash future deficits.

Posted by Unknown at 2:50 PM No comments:

Both Gold and Silver have experienced waterfall declines in New York trading, with gold declining $27 from the open and silver declining 60 cents.

Reasons cited for the decline are continuing "fiscal cliff" negotiations and US investors closing out winning positions prior to the end of the year, with many booking capital gains this financial year (US financial year ends 31 Dec) ahead of the expected rise in the US Capital Gains Tax rate in 2013. 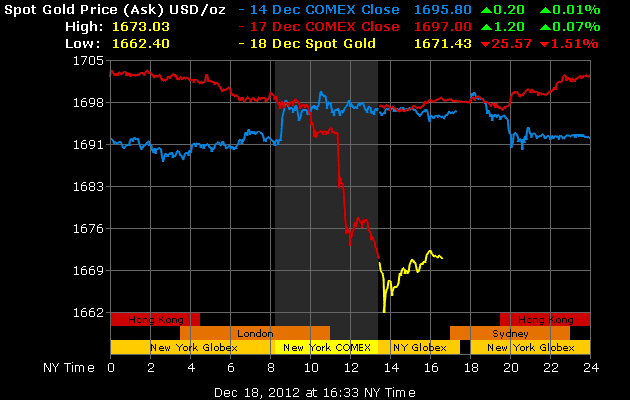 Max and Stacy reference in the following report several news items also mentioned on this blog, if you wish to know more on these topics follow the links below:

Queen on decision to sell gold reserves
Queen in PR campaign for Bank of England's Gold Vault
Do Central Banks actually have any Gold left?
Central Banks admitting were they store their Gold
The brilliant Lars Schall

Published on Dec 18, 2012 In this episode, Max Keiser and Stacy Herbert look at central banking monkeys performing cannonballs into the global dark pools, the backlash against quantitative easing and the Queen ticking orf the Bank of England. In the second half, Max Keiser talks to economist Sandeep Jaitly of FeketeResearch.com about silver backwardation and a monetary path that will throw us *all* into such poverty that none of us will be able satisfy our ends.