Posted by Unknown at 5:42 PM No comments:

Bill Fleckenstein - On the US$, Inflation & Silver 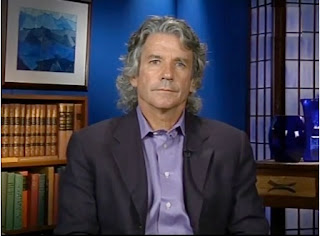 
William Engdahl, author of 'A Century of War: Anglo-American Oil Politics and the New World Order' joins RT to talk about the situation in the Middle East. 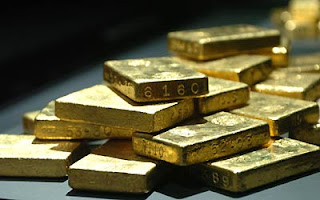 Central banks that were net sellers of gold a decade ago are buying the precious metal to reduce their reliance on the dollar as a reserve currency, signaling demand that may extend a record rally in prices.

As developing countries accelerate purchases, gold may reach $US2000 an ounce this year, compared with a record of $US1538.80 yesterday in New York, said Robert McEwen, the chief executive officer of producer US Gold Corp. Euro Pacific Capital’s Michael Pento, who correctly predicted gold’s highs for the past two years, forecast a 2011 high of $US1600.

Prices reached a record 14 times this month on demand from investors seeking an alternative to the dollar after the currency slumped to the lowest since 2009, US debt widened, and the Federal Reserve signaled April 27 that borrowing costs will remain near zero per cent for an extended period. The economy in China, the biggest foreign holder of US Treasuries, grew 9.7 per cent in the first quarter.

“China is out to have more gold than America, and Russia is aspiring to the same,” McEwen said yesterday in an interview in New York. “When you have debt, you don’t have a lot of flexibility. China wants to show its currency has more backing than the US.”

In 2010, central banks became net buyers for the first time in two decades, adding 87 metric tons in official-sector purchases by countries including Bolivia, Sri Lanka and Mauritius, according to World Gold Council data. China, with more than $US3 trillion in foreign-currency reserves, plans to set up new funds to invest in precious metals, Century Weekly reported this week. Russia purchased 8 tons of gold in the first quarter.

China, which has just 1.6 per cent of its reserves in gold, may invest more than $US1 trillion in bullion, Pento said. “China wants to be an international player, and they need to own more gold than they currently have.......read on
Posted by Unknown at 2:22 PM No comments: 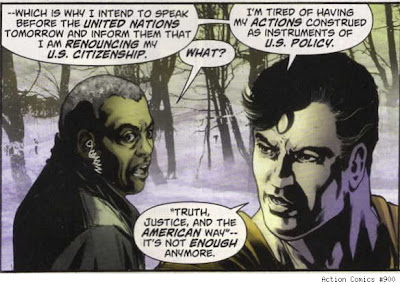 While this wouldn't be this first time a profoundly American comic book icon disassociated himself from his national identity -- remember when Captain America became Nomad? -- this could be a very significant turning point for Superman if its implications carry over into other storylines. Indeed, simply saying that "truth, justice and the American way [is] not enough anymore" is a pretty startling statement from the one man who has always represented those values the most.....read on
Posted by Unknown at 12:24 PM No comments: 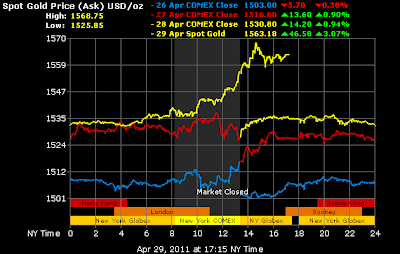 Gold has closed the week at $1565 as increasing numbers of US investors sort safe harbour in gold to protect themselves from an increasingly weak $.

Gold traded higher throughout the New York sessions and briefly touched an all time high of $1570 before settling back to $1565 at the close.

Erosion of faith in currencies, particularly the US dollar, is paying off nicely for Australia's gold miners, whose production has increased with the ever-rising gold price.

For a man carrying the title of ''Treasurer'', Peter Costello sure seemed comfortable getting rid of the treasure.

It was the winter of 1997, and the Reserve Bank of Australia had decided that a gold price around $450 an ounce was the ideal time to part with two-thirds of its bullion.

Conducted in secret over several months, the move spectacularly punctured both the gold price and confidence in the local mining industry.

''Gold no longer plays a significant role in the international financial system,'' Mr Costello was widely quoted as saying. ''One holds it for purposes of diversification.''

Fourteen years and a healthy dose of hindsight later, gold has more than tripled its value against the Australian dollar, and almost quintupled against the ailing US dollar.

The same stockpile would fetch about $7.6 billion if sold today, meaning we are more than $4 billion behind on the deal after accounting for inflation.

As the utterances of US Federal Reserve chairman Ben Bernanke helped propel gold to new heights this week, the metal that seemed to have lost its lustre in 1997 is fast reclaiming its standing as the world's currency of choice......read on
Posted by Unknown at 10:38 AM No comments:

Inspired by the range bound action in Silver this week, with the SLA holding the line at $45 and the banksters making increasingly desperate bombing raids of fiat silver as the price neared $50, it seems both sides will need to man their watchtowers.

All Along the Watchtower

"There must be some kind of way out of here,"
Said the joker to the thief,
"There's too much confusion,
I can't get no relief.
Businessman they drink my wine,
Plowman dig my earth
None will level on the line, nobody offered his word, hey"

"No reason to get excited,"
The thief, he kindly spoke
"There are many here among us
Who feel that life is but a joke
But you and I, we've been through that
And this is not our fate
So let us not talk falsely now, the hour is getting late"
Posted by Unknown at 8:39 AM No comments: