In this episode, Max Keiser and co-host, Stacy Herbert, discuss yoghurt kamikazes, David Cam-Moron and oozing debt wounds. In the second half of the show, Max talks to Goldcore's Mark O'Byrne about Germany's gold, Ireland's austerity and a trial for Bertie Ahern.

Every Police State has their 'black jails', don't think it is just in China.

Inside Story Americas - Anger in Afghanistan

US tells Russia to warn Iran of last chance 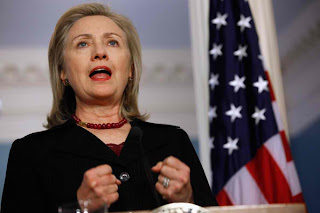 US-led military strikes against Iran are inevitable this year if Tehran does not give ground at multilateral talks next month over its nuclear programme, according to diplomatic sources in Moscow.

“Hillary Clinton asked her Russian colleague to pass that thought on to the Iranian authorities, with whom Washington does not maintain its own relations,” a high-ranking foreign ministry source told the paper.

The source said there was a high likelihood of an attack "before the end of the year", adding: "The Israelis are, in essence, blackmailing [US president Barack] Obama. They are putting him in a difficult position: either he supports war or he himself will lose support.”

Read more
Posted by Unknown at 6:31 PM No comments:

"Margin Call is as relevant as Oliver Stone’s Wall Street was in 1987, but you get the impression it’ll age better. Greed isn’t merely good here, it’s God; and He’s about to smite His acolytes with blazing Old Testament relish" ~ Telegraph

Greg Smith - Why I am Leaving Goldman Sachs


By Greg Smith
From The New York Times

TODAY is my last day at Goldman Sachs. After almost 12 years at the firm — first as a summer intern while at Stanford, then in New York for 10 years, and now in London — I believe I have worked here long enough to understand the trajectory of its culture, its people and its identity. And I can honestly say that the environment now is as toxic and destructive as I have ever seen it.

To put the problem in the simplest terms, the interests of the client continue to be sidelined in the way the firm operates and thinks about making money. Goldman Sachs is one of the world’s largest and most important investment banks and it is too integral to global finance to continue to act this way. The firm has veered so far from the place I joined right out of college that I can no longer in good conscience say that I identify with what it stands for.

It might sound surprising to a skeptical public, but culture was always a vital part of Goldman Sachs’s success. It revolved around teamwork, integrity, a spirit of humility, and always doing right by our clients. The culture was the secret sauce that made this place great and allowed us to earn our clients’ trust for 143 years. It wasn’t just about making money; this alone will not sustain a firm for so long. It had something to do with pride and belief in the organization. I am sad to say that I look around today and see virtually no trace of the culture that made me love working for this firm for many years. I no longer have the pride, or the belief.

Another reason Iran must submit to US control


For those of my vintage who haven't heard of the online mutil-player game "World of Warcraft" (WoW), well it is kinda like the old role playing game "Dungeons and Dragons" only on a server with millions of players. Just like the D&D of old the game uses Gold and Silver as the circulating currency - it might be a fantasy game but using fiat money is still too ridiculous even for this game. Like all such games players need to buy equipment for their characters, to do this they need Gold and Silver (virtual in this case). To earn gold players have to do sometimes quests or labour, such as gold mining. Typically activities undertaken to earn gold are fairly repetitive and boring and are to be avoided if possible, and here is where there is a market to be made. Rich kids (and adults) in the West don't want to go thru all the boring stuff, they just want to play the game's interesting bits, but they can't do that without Gold and Silver. So they buy virtual Gold and Silver from a 3rd party seller with fiat money (yes, the irony is so rich) who then "meets" up with them inside the game and passes them the Gold and Silver discreetly as the game owners actually ban this type of transaction, think of it as a virtual black market with the game owners as the Stasi trying to bust the black marketeers and their clients.

If that wasn't weird enough, it has been discovered that many of these 3rd party Gold and Silver sellers are using Chinese prisoners as slave labour to mine for virtual gold. No more do they need to send prisoners to gulags to mine real gold, now they just chain them to a PC for 12 hours at a time to mine virtual gold.

As a prisoner at the Jixi labour camp, Liu Dali would slog through tough days breaking rocks and digging trenches in the open cast coalmines of north-east China. By night, he would slay demons, battle goblins and cast spells.

Liu says he was one of scores of prisoners forced to play online games to build up credits that prison guards would then trade for real money. The 54-year-old, a former prison guard who was jailed for three years in 2004 for "illegally petitioning" the central government about corruption in his hometown, reckons the operation was even more lucrative than the physical labour that prisoners were also forced to do.

"Prison bosses made more money forcing inmates to play games than they do forcing people to do manual labour," Liu told the Guardian. "There were 300 prisoners forced to play games. We worked 12-hour shifts in the camp. I heard them say they could earn 5,000-6,000rmb [£470-570] a day. We didn't see any of the money. The computers were never turned off."

It is known as "gold farming", the practice of building up credits and online value through the monotonous repetition of basic tasks in online games such as World of Warcraft. The trade in virtual assets is very real, and outside the control of the games' makers. Millions of gamers around the world are prepared to pay real money for such online credits, which they can use to progress in the online games.

It is estimated that 80% of all gold farmers are in China and with the largest internet population in the world there are thought to be 100,000 full-time gold farmers in the country.

Read in full
Posted by Unknown at 9:12 AM No comments:

Capital Account - Michael Scheuer on the Economics of War with Iran

Posted by Unknown at 6:57 AM No comments: