Max and Stacy discuss stealth inflation via food substitution and the Irish banking disaster. Listen to their weekly radio show here or download here
Posted by Unknown at 9:53 PM No comments:

Australians Seek Gold Repatriation - Bring Home Our Gold by   BullionBaron
Posted by Unknown at 3:40 AM No comments:

In this episode of the Keiser Report, Max Keiser and Stacy Herbert discuss the wicked web that has been weaved when banksters first set out to deceive, the first law of thermo-derivatives which states that risk cannot be destroyed and the hot tub of fraud in which the taxpayer owned Royal Bank of Scotland weaves their web of deception. In the second half of the show, Max Keiser talks to Mitch Feierstein, author of Planet Ponzi, who shows us what the Fed's $3 trillion balance sheet would look like in a briefcase and the Central Banking bag of tricks that include: divert and deflect, delay and pray and extend and pretend. Finally they ponder whether we face a global reset or sovereign failures? 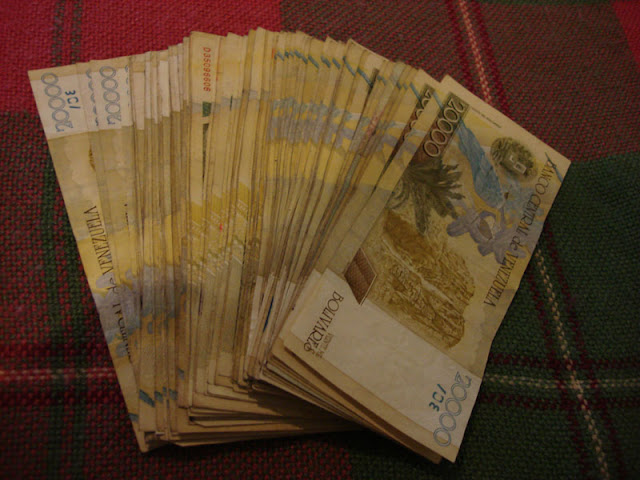 Fiat currency - No intrinsic value and at the mercy of the government and fx junkies.

Venezuela devalued its currency for the fifth time in nine years, a move that may undermine support for ailing President Hugo Chavez and his allies ahead of possible elections later this year.

South America’s biggest oil producer may have to call elections if Chavez, who hasn’t been seen for two months after undergoing cancer surgery in Cuba, dies or steps down. He ordered his government to weaken the exchange rate by 32 percent to 6.3 bolivars per dollar starting Feb. 13, Finance Minister Jorge Giordani told reporters yesterday in Caracas.

A spending spree that almost tripled the fiscal deficit last year helped Chavez, 58, win a third six-year term. The devaluation can help narrow the budget deficit by increasing the amount of bolivars the government receives from oil exports. Yet the move also threatens to accelerate annual inflation that reached 22 percent in January.

“There is surely going to be a political cost, which may weigh against the Chavistas and hence be viewed favorably from the markets if it shifts protest votes to the opposition,” Siobhan Morden, the head of Latin America fixed income strategy at Jefferies Group Inc. in New York, said in a note to clients.

Former opposition presidential candidate Henrique Capriles Radonski said the measure “mocked Venezuelans” and he criticized the government for attempting to hide the impact of the devaluation by announcing it the day before the annual carnival holidays.

“Oil is at $106 and they have to devalue!” Capriles, who lost to Chavez by 11 percentage points in elections last October, said in a message posted on his Twitter account. “They spent the money in campaign, corruption, presents abroad! Lying government!”

Read more
Posted by Unknown at 2:29 AM No comments: