Colombia is known for many things. On the plus side there is its vibrant lifestyle, its diverse and beautiful landscape with heart stopping vistas, its rich culture and history and of course its fabulous coffee. On the debit side there is its unfortunate place at the top of the world league of cocaine producers and a reputation for violence born out of South America's longest running armed conflict, between government forces, left wing insurgents and right wing paramilitaries. And then there are its emeralds. To those who covet the sparkling green gems, Colombia is where the very finest stones - those with the deepest colour and fewest imperfections and trace elements - are to be found. Emeralds have been mined there since antiquity and were as much prized by the Incan nobility as they were by the Spanish conquistadors who spread across the 'new world' in the 16th century. Today, Colombia is responsible for almost two thirds of the world's production of fine emeralds; commerce that brings in hundreds of million dollars of much needed export income.

From The New York Times

Losses on JPMorgan Chase’s bungled trade could total as much as $9 billion, far exceeding earlier public estimates, according to people who have been briefed on the situation.

When Jamie Dimon, the bank’s chief executive, announced in May that the bank had lost $2 billion in a bet on credit derivatives, he estimated that losses could double within the next few quarters. But the red ink has been mounting in recent weeks, as the bank has been unwinding its positions, according to interviews with current and former traders and executives at the bank who asked not to be named because of investigations into the bank.

The bank’s exit from its money-losing trade is happening faster than many expected. JPMorgan previously said it hoped to clear its position by early next year; now it is already out of more than half of the trade and may be completely free this year.

As JPMorgan has moved rapidly to unwind the position — its most volatile assets in particular — internal models at the bank have recently projected losses of as much as $9 billion. In April, the bank generated an internal report that showed that the losses, assuming worst-case conditions, could reach $8 billion to $9 billion, according to a person who reviewed the report.

Read more
Posted by Unknown at 9:39 PM No comments:

Chris Powell: The why and how of gold price suppression

Chris Powell: The why and how of gold price suppression | Gold Anti-Trust Action Committee
Posted by Unknown at 2:39 PM No comments:

John Williams - The Next Crash Will Be A Lot Worse!

John Williams's charts of US Inflation and Employment numbers are featured at the bottom of this blog.

http://usawatchdog.com/ - Anyone who thinks the U.S. is in recovery should stop listening to the mainstream media and listen to John Williams. He heads up Shadowstats.com, and is one of the few economists who crunches the numbers to give unvarnished true statistics. Adjusted for real inflation of about 7%, Williams says, "GDP has plunged, and we have been bottom bouncing" ever since the financial crisis started. Williams says, "The next crash will be a lot worse (than 2008) because it will push us into the early stages of hyperinflation." He predicts this will happen "by the end of 2014" at the latest. Long before 2014, Shadowstats.com thinks there is a good chance of "panic selling of the U.S. dollar," if the Federal Reserve starts another round of money printing (QE3) to save the system and the big banks. No matter what Williams predicts, "There will eventually be a crisis to bring the system down as we know it. . . . We're on the brink." According to Williams, "at some point, you will see a new currency in the U.S." The founder of Shadowstats.com sat down for a one on one interview with Greg Hunter to talk about the mathematical certainty of a systemic collapse in the not-so-distant future.

Nouriel Roubini - We Are Heading for a Global Perfect Storm

China & Russia Buy Bullion as Protection | Resource Investor
Posted by Unknown at 11:35 AM No comments:

The PF Keys still in working order at the RBA 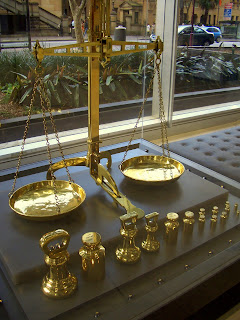 The following is a recent email conversation I had with the Reserve Bank of Australia (RBA). Note the RBA holds approx. 80 tonnes of Gold as part of its reserves (marking Australia's the 36th largest sovereign gold holdings), and has done since selling 167 tonnes of Gold in 1997 at the bargain price of an average of US$320/oz. My previous email conversation (different PF key response) is here


I was wondering with the recent decline in gold prices if the RBA was considering adding to their gold reserves, such as other prudent central banks are currently doing (China and Russia come to mind)? You could swap those fiat SDRs you are holding for a tangible asset, wouldn't that be prudent in this time of bank runs and sovereign risk?


Thank you for your email.


The Reserve Bank of Australia does not comment on its investment management decisions, other than in its Annual Report (please scroll down to the ‘Reserves Management’ section).

Banking competitors are trying to lure away top talent at JP Morgan by highlighting the recent prop trading losses are likely to affect bonues and Jamie Dimon isn’t being honest about how bad the loss will be.

On July 13th the banking giant will announce 2nd quarter earnings and a real-time number is expected on how many billions net income gets wacked with because the London whale trade has been wound down or they’re willing to admit how bad the wind down will be. Last week Mark DeCambre at the New York Post wrote his JPM sources expect the loss to be between $4-6 billion – JPM’s estimate in May was only $2bn. But I heard this week JPM managing directors are being told it’s more. To the tune of $9 billion – Ouch!

Read on
Posted by Unknown at 7:24 AM No comments: