A population of 7 billion results in these amazing figures...There is only about 22 grams of Gold bullion and 4.5 grams of Silver bullion per person in the world. How can gold and silver not go up over time as population increases.

A new United Nations report counting the world's population at now seven billion is serious grounds for brainstorming, the organisation says. More and more cities may reach the proportions of Mong Kok, in Hong Kong, said to be the most densely populated, with some 130,000 people per square kilometre.

In a remarkable day, described by one of Australia's biggest options traders as "bedlam", Australian shares have closed at their highest level in three months. A technical glitch just minutes after the market opened at 10am AEDT stopped all trade until 2pm, leaving investors unable to respond to the deal reached in Europe to solve the continent's debt crisis.

Read more: http://www.smh.com.au/business/markets/markets-live-shares-soar-despite-bedlam-20111027-1mkuj.html#ixzz1bxmdeFNB
Posted by Unknown at 6:08 PM No comments:

From: Euronews  | Oct 26, 2011
http://www.euronews.net/ Europe's leaders intend to multiply their rescue fund fourfold to one trillion euros, according to reports emerging from the emergency euro zone summit in Brussels.

From: EUXTV  | Oct 26, 2011
With only hours to go before one of the most important summits in European history, observers in Brussels believe that the talks will not provide the "comprehensive agreement" initially promised by German Chancellor Angela Merkel and French President Nicolas Sarkozy.
A definitive agreement to rescue the euro may still take days to finalise.

According to Euractiv, diplomats report a lack of progress on the expansion of the EU rescue fund. That slowdown has already caused a last-minute cancellation of a meeting of euro zone finance ministers.

Banking recapitalization also remainsi a troubling issue. EU leaders have agreed that banks need more capital but they still have to say how much and how the banks will get this.
Banks say they could live with a 40% haircut on Greek debt but some EU leaders, including Merkel are pushing for 60 percent.

The same muddle goes for the EFSF. There is still no exact figure for a bigger fund, with figures ranging between 1000 and 2000 billion euro. It remains unclear how that bigger firepower would be achieved.
To boost the fund, EU leaders have two options: an insurance option and an investment option. They can also consider sing a combination of these.

The investment option would raise money from governments and possibly tap investors on capital markets.
Diplomats, talking to EurActiv on condition of anonymity, said creating clarity on the role of this investment option in handling the growing debt problem is the most important part of the talks at the moment.
It's clear that a comprehensive deal is not in sight yet, but parts of the solution are likely to be made public in the next 24 hours. It remains to be seen if that will renew the confidence in the euro on the international financial markets. Ray Frenken. EUX.tv 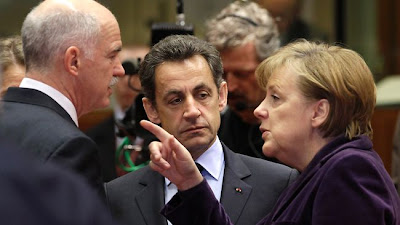 LONDON: Hopes for a grand plan to solve the European debt crisis at the emergency summit of political leaders in Brussels have faded, with France and Germany continuing to be at odds over the rescue package.

Fears of a double-dip global recession rose as hopes for the rescue deal fell, with shares plunging in Europe and New York as negotiations continued late into Tuesday night.

The deadlock forced the cancellation of a meeting of the European Union's 27 finance ministers that had been planned for the start of the summit yesterday morning. But two other meetings were set to go ahead. The 27 EU countries were to discuss rescue proposals - non-euro countries such as Britain are keen to ensure they are not disadvantaged by any deal - and then the 17 members of the single-currency euro zone were to vote on final measures.

The prolonged hand-wringing over the 18-month crisis produced near-despair among some EU diplomats, with one telling The Guardian: ''Everybody realises we are on the brink of such a total catastrophe that anything that prevents it and a huge recession must be grasped.

''The markets will kill us if they haven't laughed themselves to death.'' The rescue proposals have three pillars: persuading creditors to give up hope of being repaid a large proportion of Greek debt (known as a write-down or a ''haircut''); injecting more money into Europe's banks so they can withstand the shock waves of a Greek default; and increasing the euro zone's bailout fund, the European Financial Stability Facility, so it can cope if larger debt-ridden economies such as Spain or Italy need to call upon it.

http://www.euronews.net/ The European Council opened its doors again to the political elite the 14th crisis summit in 21 months. Sunday's meetings failed to come up with concrete solutions when the leaders said resolutions could be expected on Wednesday.

Um no, at approx $53 million ABC Bullion wont be taking any pre-orders for this coin :-)

The Perth Mint has made the biggest, heaviest gold coin in the world. Cast from 99.99% pure gold and issued as Australian legal tender, the monumental gold coin weighs one tonne. This video shows how The Perth Mint made the world's first one tonne gold coin, which features an iconic kangaroo design. More: http://www.1tonnegoldcoin.com

I nice retort from RT. Actually to be balanced one should never take anything the BBC,VOA / CNN, RT and Press TV say about their own countries interests at face value. For example it is rare to see an anti-Putin comment on RT but that doesn't mean that their reporting on other topics need not be fair and balanced, just us it would be rare to see VOA or CNN reporting on the systemic corruption on Wall St affecting the US political system.

My advice is to take on board multiple viewpoints about any major issue and determine your take on the matter yourself as all media outlets have their own agenda, regardless of their country of origin.

The Chairman of the Broadcasting Board of Governors - the organization overseeing U.S. media directed at foreign audiences - says his organization needs to fight its enemies. And among those are Iran's Press TV, China's CCTV and RT. Political commentator Peter Lavelle says the chairman's statement puts him beyond real journalism

Posted by Unknown at 8:00 AM No comments: