Weekend Chilout - Falling at their feet

With world markets falling at the feet and hanging on every word of Ben Benanke and Mario Draghi this week it seemed only fitting that the hot money junkies were left in tears.


You're hiding from me now
There's something in the way that you're talking
Words don't sound right
But I hear them all moving inside you, go
I'll be waiting when you call

Pressure on the European Central Bank

Markets across Europe fell, after the chief of the European Central Bank disappointed investors who had hoped for more drastic action on the eurozone crisis.

Some analysts say its just a matter of time before it starts buying sovereign debt again.

Max Keiser: Cancer is How They Will Take It All

On the Wednesday, August 1 edition the Alex Jones Show, Alex talks with former Wall Street stockbroker and filmmaker Max Keiser about the continuing implosion of the economy as the euro crisis plagues global economies, cuts factory and productive output, stimulates endemic joblessness, and the Federal Reserve warns the economy may be stuck in permanent slow growth.

"The euro is irreversible" was the headline from European Central Bank head Mario Draghi at the bank's monthly policy meeting, but exactly what it will do to support the single currency remains unspecified.

In this episode, Max Keiser and Stacy Herbert discuss crimes against capital, financial blockades and hoax Op-eds. They also suggest that Boris Johnson may be the illegitimate step nephew of Louis XV and how all your financial opinions come from a warped fortune cookie written by some guy that just dropped massive tabs of acid. And they discuss this while minding their Second Amendment right to bear a shoulder launch missile. In the second half, Max interviews Birgitta Jonsdottir about the need to form Pirate Parties around the world to protect privacy, democracy and stop financial blockades of certain groups for their beliefs and campaigns.

The dark Knight rises as dark pools of liquidity traded by robot computer algorithms went awry and threatened Knight Capital's stability, costing the firm $440 million. This is just one more issue with broker dealers and markets, and one more blow to confidence in the US financial system. We hear from a former fraudster, Sam Antar, and the Commodity Customer Coalition Founders, James Koutoulas and John Roe, about how to restore faith in a broken system.

Markets sell off after Draghi disappoints

Investors had been hoping for a clear signal from Mario Draghi that the European Central Bank was ready to take action to prop up the euro. But in his press conference following the ECB monthly meeting on Thursday, all he offered was more promises. Markets plunged as a result.

Anticipation ahead of Thursday's European Central Bank (ECB) meeting was high. Last week, ECB head Mario Draghi had pledged that the bank would "do whatever it takes to preserve the euro." The comments set off a mini rally on stock markets the world over, and even the euro began gaining back some lost ground. Investors were eager to find out what exactly he intended to do.

Draghi, it would seem, was unable to live up to their expectations. "The Governing Council … may undertake outright open market operations of a size adequate to reach its objective," the ECB president said. "We will consider further non-standard monetary policy measures according to what is required to repair monetary policy transmission. In the coming weeks, we will design the appropriate modalities for such policy measures."

Markets plunged before he was even finished with his press conference. Germany's blue chip stock index DAX plummeted immediately by 1.88 percent, and the euro cratered in value from $1.24 to below $1.22. American stock futures, which indicate how stock markets in the US might perform on a given day, slumped as well, signalling a potentially rotten day on Wall Street.

"After the strong recovery since the middle of last week, the market wanted to hear something other than that modalities will be designed in the coming weeks," one frustrated trader in Frankfurt told German newswire DPA.


The sell off also affected Gold and Silver markets 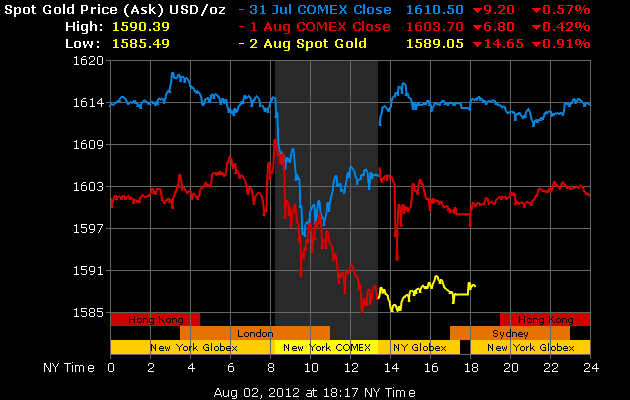