The Reserve Bank of Australia (RBA) has just lowered the cash rate by 50 basis points, or in English half a percent. Immediate response in the markets was for the Aussie dollar to drop approx. 1cent against the US$ and for Gold to spike by AUD$12/oz. 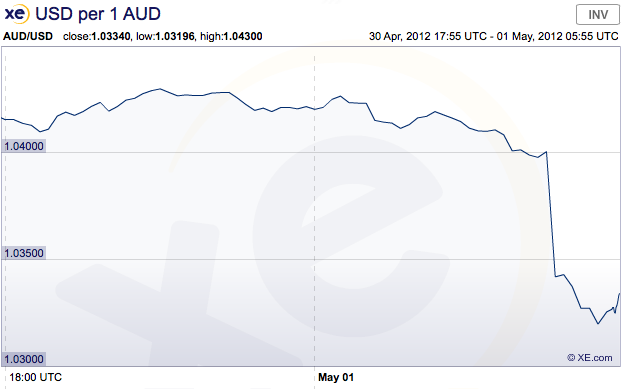 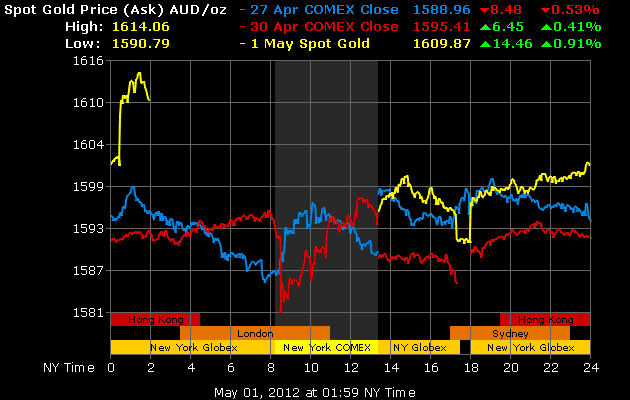 The Reserve Bank has slashed interest rates by the most since the global financial crisis in a bid to reignite growth in the sagging economy. The dollar dived on the decision.

The central bank today cut its official cash rate by 50 basis points - twice the amount expected by economists - to 3.75 per cent.

Today’s surprise reduction, the first by the RBA this year, is the biggest since February 2009 and reflects the bank’s concern that the economy needs an extra shot in the arm.
Advertisement: Story continues below

Attention will now shift to the commercial banks as borrowers - and depositors - wait to see how much the lenders cut interest rates, and how soon. ANZ customers, though, will probably have to wait until Friday before they learn of the change.

The RBA indicated that the size of today's cut is needed in part because the central bank anticipates commercial lenders won't pass along the full reduction.

"A reduction of 50 basis points in the cash rate was, in this instance,...judged to be necessary in order to deliver the appropriate level of borrowing rates," RBA governor Glenn Stevens said in the statement accompanying today's move.

The dollar immediately shed half a US cent to drop to about $US1.035 on the decision as the lower Australian interest rates cut its lure for investors. It fell even further in recent trading, to sink towards the $US1.03 mark.

"Our view is that they will deliver a rate cut in August," said Commonwealth Bank Chief Currency Strategist Richard Grace. He tips the Australian dollar will slip below parity with the US dollar over the next few weeks.

Bank of America Merrill Lynch Australia chief economist Saul Eslake said the RBA noted the damaging impact of the strong dollar on the local economy and the need for lower official rates to make room for lower commercial lending rates.

‘‘In making the decision, the RBA has explicity acknowledged the dampening impact on growth by the strong dollar,’’ said Mr Eslake.

Today’s cut leaves the RBA’s cash rate at its lowest since December 2009 when the economy was recovering from the initial impact of the GFC. The RBA raised rates seven times from October 2009 before changing course last November with the first of two cuts to round out 2011.

Read more: http://www.smh.com.au/business/rba-slashes-interest-rates-20120501-1xwgg.html#ixzz1tb4Fuww4
Posted by Unknown at 4:31 PM No comments:

What an appropriate guest and topic on a day that Gold "fat fingered".

Posted by Unknown at 1:20 PM No comments:

Gerald Celente - This Week in Money

Interesting to watch the host unable to bring herself to break the MSM golden rule and refer to Ron Paul as "Republican Presidential candidate Ron Paul". 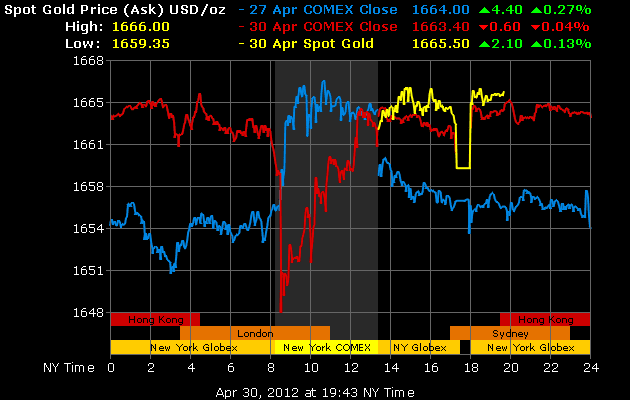 According to the story below 750,000/oz of paper gold was dropped on the market at the open in New York last night. If 750,000oz of paper gold hits the floor and there is no one there to hear it does it still make a thud?  Based on the opening price of US$1661 that dump was worth $1.25Billion! If you had that much  bullion and you really wanted to sell it wouldn't think you might sprinkle it over the market in 1,000oz lots over a week or more, instead of dropping it from a Chinook in one great lump and thereby guaranteeing the lowest price possible for the session. Whomever this was he or she is making Gordon Brown look like a gold trading genius.

The CME Group Inc.’s Comex division recorded an unusually large transaction of 7,500 gold futures during one minute of trading at 8:31 a.m. EDT. The sale took out blocks of bids as large as 84 contracts in one fell swoop and cut prices down to $1,648.80 a troy ounce. The overall transaction was worth more than $1.24 billion.

Gold traders buzzed with speculation that the transaction was an input error — a so-called “fat finger” trade.

“Or a Gold Finger as it might be known in the bullion market,” traders at Citi joked in a note to clients.

One indicator that the transaction was a mistake was its size. At 750,000 troy ounces, such large trades are rarely conducted amid very thin trading volumes. Monday trading was expected to be quiet as market participants in China and Japan are out on holiday and many European traders are preparing for a holidays there.

“No one who has the account size and the money to trade thousands of gold contracts would do it in one transaction, that’s just stupid,” said one trader. The collateral required to purchase 7,500 contracts is about $75.9 million in cash that the trader would have deposited with his broker.

Moreover, the likely mistake is symptomatic of the shift to electronic trading. Computer trading systems are vulnerable to input errors, as they do not question the order before executing the transaction. By contrast, when most order flow would pass through the Comex floor where human traders processed the deals, potential errors stood higher chances of being intercepted, traders said.

“You would definitely verify [a trade this big] before you executed it,” said one Comex floor broker.

Still, not everyone agreed Monday’s slip in gold was caused by a keystroke error. Chuck Retzky, director of futures sales for Mizuho Securities USA, said that silver prices suffered a similar leg down at the same time as gold, tumbling 35 cents to $30.805 a troy ounce, but other markets like Treasurys, currencies and stocks were unperturbed.

“To do it both in gold and silver tells me that it wasn’t a trade done in error,” Retzky said.

Read more
Posted by Unknown at 11:12 AM No comments:

Spain has plunged into a second recession amid government measures to rein in the country's debt. Ratings agency Standard and Poors has downgraded nine of Spain's banks, many of which are bogged down in bad loans. It also comes as Spain's unemployment rate has soared to almost 25 per cent, the highest in Europe. And sweeping cuts to health care and education have seen thousands taking to the streets, angered at the government austerity measures. RT gets some analysis on the situation in the country from Professor of economics Philipp Bagus, author of the book "The tragedy of the euro".