Syria Ripe For A False Flag

Dec 6, 2012 by TheAlexJonesChannel Amidst Turkey getting NATO approval to line up Patriot anti-missile systems on its border and with US officials indicating that the consequence of President Bashar Al-Assad using chemical weapons will be military intervention, the USS Eisenhower has arrived off the coast of Syria to send a clear signal that direct confrontation could be near.

The aircraft carrier, which boasts 8 fighter bomber squadrons and 8,000 sailors, airmen and Marines, sailed up to the Syrian coast yesterday during bad weather. The Eisenhower is joined by the USS Iwo Jima Amphibious Ready Group which carries another 2,500 Marines.

"Facing Syria now are 10,000 US fighting men, 70 fighter-bombers and at least 17 warships, including the three Iwo Jima amphibious craft, a guided missile cruiser and 10 destroyers and frigates. Four of these vessels are armed with Aegis missile interceptors," reports DebkaFile. http://www.infowars.com/us-aircraft-carrier-arrives-off-syrian-coast/

If only the Reserve Bank of Australia would do the same to replace the 70% of Our Gold they stupidly sold in 1997 at near record lows, (insert your favourite expletive) RBA.

The bank added 14 metric tons in November, bringing the total to 84.4 tons, the bank said in a statement today. By value, holdings increased about $780 million to $3.76 billion, equivalent to 1.2 percent of total reserves, the bank said.

Central banks from Brazil to Kazakhstan have been expanding their gold reserves at a time when investors increased holdings in exchange-traded products to a record to protect against weaker currencies and the potential for faster inflation. Gold is poised for a 12th annual gain as the U.S. Federal Reserve boosts stimulus to buttress the recovery in the world’s largest economy and European policy makers battle the debt crisis.

“Central-bank buying is a solid pillar for gold,” Nick Trevethan, senior commodities strategist at Australia & New Zealand Banking Group Ltd., said by phone from Singapore. “It’s not a story that will go away soon.”

Countries bought 373.9 tons in the first nine months of the year, according to the producer-funded World Gold Council, which said in November that full-year additions will probably be at the “bottom end” of a range from 450 to 500 tons. Last year, central banks purchased 456 tons.

“Gold is a physical, safe asset,” the Bank of Korea said in the statement. The precious metal “is a way of diversification, which helps reduce investment risk in terms of foreign-exchange reserves management,” it said.

Read more
Posted by Unknown at 8:20 PM No comments:

Jim Rickards: Gold is where you want to be cause you can't QE Gold

The plot to overthrow the US government during the Great Depression

An interesting period of US history rarely discussed.

Ron Paul: The Film A Powerful Message of Freedom and Liberty

Posted by Unknown at 3:08 PM No comments:

Who else is reading

I thought my readers might be interested in who else is reading this blog. The following graphic shows the top 10 countries by views over the last week. 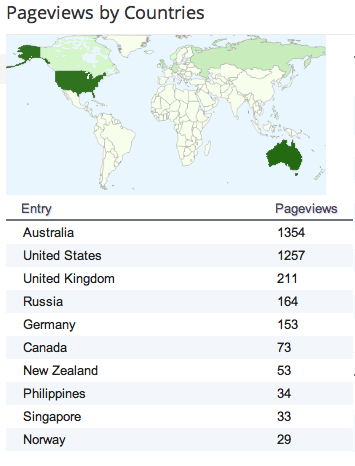 Is Gold Having an Identity Crisis?

Posted by Unknown at 2:53 PM No comments:

Two Australian radio djs apologized Wednesday after impersonating Queen Elizabeth II and Prince Charles in a prank call and getting a London hospital to tell them all about Kate Middleton's condition.

Twinkling city lights, raging wildfires and colorful auroras are lit up in new dazzling nighttime views of the Earth. The new images released Wednesday are courtesy of a newly launched NASA-NOAA satellite.

Mark Bristow - Gold miners need to do something drastic Unless something changes, the gold sector could well face similar problems to those being seen in the platinum sector, Randgold CEO, Mark Bristow says. Listen to the Mineweb.com interview with Geoff Candy interview here
Posted by Unknown at 11:07 AM No comments:

Sixteen years ago today, Alan Greenspan spoke the now infamous words "irrational exuberance" during an annual dinner speech at The American Enterprise Institute for Public Policy Research. Much has changed in the ensuing years (and oddly, his speech is worth a read as he draws attention time and again to the tension between the central bank and the government). Most critically, Greenspan was not wrong, just early. And the result of the market's delay in appreciating his warning has resulted in an epic shift away from those same asset classes that were most groomed and loved by Greenspan - Stocks, to those most hated and shunned by the Fed - Precious Metals. While those two words were his most famous, perhaps the following sentences are most prescient: "A democratic society requires a stable and effectively functioning economy. I trust that we and our successors at the Federal Reserve will be important contributors to that end"

Read on
Posted by Unknown at 9:26 AM No comments:

US troops arrive near Syrian shore on USS Eisenhower 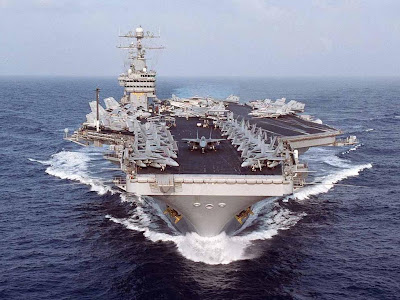 The USS Eisenhower, an American aircraft carrier that holds eight fighter bomber squadrons and 8,000 men, arrived at the Syrian coast yesterday in the midst of a heavy storm, indicating US preparation for a potential ground intervention.

While the Obama administration has not announced any sort of American-led military intervention in the war-torn country, the US is now ready to launch such action “within days” if Syrian President Bashar al-Assad decides to use chemical weapons against the opposition, the Times reports.

Some have suggested that the Assad regime may use chemical weapons against the opposition fighters in the coming days or weeks.

Read more
Posted by Unknown at 9:04 AM No comments:

Nuclear Israel: The secret that is not

The United Nations General Assembly is pressing Israel to reveal its nuclear arsenal. Israel has lashed out against the overwhelming approval of the resolution, which calls for international inspectors to be allowed to examine its atomic programme. Its foreign minister said the vote was meaningless. The country also rejected a UN-backed conference on a nuke-free Middle East. Israel denies it has nuclear weapons - but refuses to provide proof that it doesn't. RT's Paula Slier tried to lift the veil surrounding Israel's atomic programme.

Why Platinum Prices Could Spike in 2013