Anyone know what % of Australia's oil imports come from Iran?

"On the question of Iran, let me be absolutely clear (regarding) the actions taken in Brussels yesterday on sanctions by the European Union -- we in Australia will undertake precisely the same parallel action for Australia," he told reporters during a visit to London......read more
Posted by Unknown at 9:32 PM No comments:

The Ron Paul Fix is in

One of the most powerful videos Sean has ever produced.

Posted by Unknown at 8:53 PM No comments:

Reports from Iran suggest a fierce reaction to the EU's move to impose an embargo on Iran's crude exports. To discuss the implications of fresh sanctions against Iran, RT talks to Pepe Escobar - columnist and 'Asia Times' correspondent, from Bangkok.


Repeat after me - "we bombed Libya to protect the Libyan people".....if you say it often enough it will make you feel better when you go to gas pump.

The United States has sent some 12,000 soldiers to Libya, in the first phase of deployments to the oil-rich North African nation.

According to Asharq Alawsat, the troops landed in the eastern oil port city of Brega.

Although the deployment is said to be aimed at generating stability and security in the region, the troops are expected to take control of the country's key oil fields and strategic ports.

Brega, the site of an important oil refinery, serves as a major export hub for Libyan oil. The town is also one of the five oil terminals in the eastern half of the country.

Following the popular uprising of the Libyan people, NATO launched a major air campaign against the forces of the former regime on March 19, 2011 under a UN mandate to “protect the Libyan population.”.....read more

Sen. Rand Paul on The Situation Room with Wolf Blitzer


Sen. Rand Paul speaking with CNN's Wolf Blizter regarding his detainment by the TSA

Marc Faber - US Bonds Should Be Rated Junk Status

Thanks to SilverDoctors.com for the link.

Posted by Unknown at 5:44 AM No comments:

Posted by Unknown at 4:57 AM No comments:

Sounds like the TSA have never heard of Ron & Rand Paul either.......

Posted by Unknown at 3:54 AM No comments: 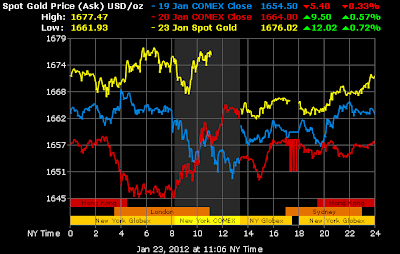 Currency wars continue and are deepening.
Posted by Unknown at 3:19 AM No comments:

A study in mass psychology

An amazing video of the group mind as was being discussed by James Dines in a earlier post. This is a perfect analogy to the silver bull market. A few nutters ignoring what others thought and started buying silver at US$4/oz then a few others join them at $8, then a few more at $15, and so on, then half of the rest of the crowd joins in when we get to $100, then everyone parties at $500 - $1,000/oz. Dorothy can you dance in those silver slippers?

Posted by Unknown at 2:23 AM No comments: