On this edition of Peter Lavelle's CrossTalk he asks his guests why America and its western allies have always talked the talk of democracy in the Arab Middle East, but could never walk the walk of the same?
Posted by Unknown at 6:30 PM No comments: 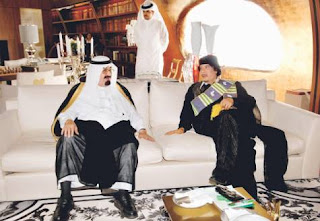 Oil past the $100 mark in New York yesterday for the first time since the global financial crisis of 2008, and King Abdullah of Saudi Arabia returned from medical treatment abroad with $11 billion in housing and social security handouts for the poor.

But the eyes of the world are focused on the horrific violence in Libya with Muammar Qaddafi saying he will never surrender and digging in for a final battle with his mercenary forces. Paying foreign soldiers to shoot his own citizens has led to widespread desertions from his military and the eastern city of Benghazi has fallen.

Western countries are now engaged in a massive effort to get their nationals out of a fast deteriorating situation. Oil and gas exports are being shut down, and this impacts immediately on global energy prices. Libya produces 1.6 million barrels per day or 1.8 per cent of the global oil supply....read on

David Morgan & Mike Maloney - Is there any Gold in Fort Knox?

London, Feb 20(ANI): Double murder-accused US official Raymond Davis has been found in possession of top-secret CIA documents, which point to him or the feared American Task Force 373 (TF373) operating in the region, providing Al-Qaeda terrorists with "nuclear fissile material" and "biological agents," according to a report.

Russia's Foreign Intelligence Service (SVR) is warning that the situation on the sub-continent has turned "grave" as it appears that open warfare is about to break out between Pakistan and the United States, The European Union Times reports.

The SVR warned in its report that the apprehension of 36-year-old Davis, who shot dead two Pakistani men in Lahore last month, had fuelled this crisis.

According to the report, the combat skills exhibited by Davis, along with documentation taken from him after his arrest, prove that he is a member of US' TF373 black operations unit currently operating in the Afghan War Theatre and Pakistan's tribal areas, the paper said.

While the US insists that Davis is one of their diplomats, and the two men he killed were robbers, Pakistan says that the duo were ISI agents sent to follow him after it was discovered that he had been making contact with al Qaeda, after his cell phone was tracked to the Waziristan tribal area bordering Afghanistan, the paper said.

The most ominous point in this SVR report is "Pakistan's ISI stating that top-secret CIA documents found in Davis's possession point to his, and/or TF373, providing to al Qaeda terrorists "nuclear fissile material" and "biological agents", which they claim are to be used against the United States itself in order to ignite an all-out war in order to re-establish the West's hegemony over a Global economy that is warned is just months away from collapse," the paper added. (ANI)

Gadhafi can spot a Ponzi scheme when he sees one Even despotic leaders, it turns out, can make sound investment decisions.

Libyan leader Moamar Gadhafi turned down a chance to invest with Bernie Madoff and accused ponzi schemer Allen Stanford, according to a new diplomatic cable released by WikiLeaks. (The U.K.'s Telegraph has the full cable, dated January 28, 2010.)

In the cable, the head of the Libyan sovereign wealth fund, Mohamed Layas, claimed to control $32 billion in liquid assets, most of which was deposited at U.S. banks. Layas, according to the cable, was miffed at Libyan funds that were "mismanaged" by Lehman Brothers, the failed investment bank......read on