Prescient video on the CFTC and Silver

When Ben Bernanke announced that the Federal Reserve's Open Market Committee was going to continue its monetary expansion program it calls Quantitative Easing, almost everyone in the financial media was taken by complete surprise. According to the mainstream media, the non-taper "surprised almost everyone out there." Well it did not surprise me, nor anyone who had been paying attention to what I had been saying. As I said repeatedly over the past several months, the Fed knows that the appearance of economic health would evaporate if its stimulus were withdrawn, or even diminished. The Fed understands, as the market seems not to, that the current "recovery" could not survive without the continuation of massive monetary stimulus. In fact, the Fed's next big move will likely be to increase, rather than taper, its monthly QE dosage!

Got to love the fact that Ben Bernanke and the New York Federal Reserve are counterfeiting $85Billion into existence every month but the guys in the print room in Fort Worth, Texas are worried about someone faking a piece of ugly looking paper. And guys that gold lettering ain't fooling anyone, it is still just a piece of paper.

What The Pope Has Said That's Too Dangerous To Talk About 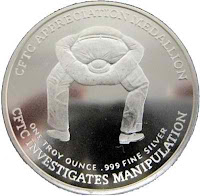 Washington, DC – The Commodity Futures Trading Commission (CFTC or Commission) Division of Enforcement has closed the investigation that was publicly confirmed in September 2008 concerning silver markets. The Division of Enforcement is not recommending charges to the Commission in that investigation. For law enforcement and confidentiality reasons, the CFTC only rarely comments publicly on whether it has opened or closed any particular investigation. Nonetheless, given that this particular investigation was confirmed in September 2008, the CFTC deemed it appropriate to inform the public that the investigation is no longer ongoing. Based upon the law and evidence as they exist at this time, there is not a viable basis to bring an enforcement action with respect to any firm or its employees related to our investigation of silver markets.

The Division of Enforcement’s investigation utilized more than seven thousand enforcement staff hours. The staff reviewed and analyzed position and transaction data, including physical, swaps, options, and futures trading data, and other documents and information, and interviewed witnesses. The Division’s investigation included an evaluation of silver market fundamentals and trading within and between cash, futures and over the counter markets. The investigation was also undertaken with assistance by the Commission’s Division of Market Oversight, the Commission’s Office of Chief Economist, and outside experts.

Separately, the Division of Market Oversight continued surveillance of the silver market contemporaneously to the Division of Enforcement’s investigation. The Division of Market Oversight’s market surveillance function encompasses a robust monitoring of traders’ positions and transactions at the ownership and account levels to identify potential violations of the Commodity Exchange Act and Commission regulations including, but not limited to, price manipulation, disruptive trading and trade practice violations. For example, after an episode of sharp price moves in any commodity, staff utilizes numerous visualization and analytical tools on data submitted daily to the Commission to discover indications of potential manipulation and other violations. Where questions remain, Division of Market Oversight staff regularly utilize the Commission authority such as the Special Call under Regulation § 18.05 to obtain additional detailed information from traders.

The Division of Enforcement takes complaints it receives seriously. The Division will not hesitate to use its authority, including new manipulation authority in the Dodd-Frank Act, to bring market manipulation charges as supported by the evidence.

If you have information about a violation of the Commodity Exchange Act or Commission regulations, you may either file a tip or complaint under our whistleblower program, or report such violations or other suspicious activities or transactions to our Division of Enforcement. The CFTC will pay awards to eligible whistleblowers who voluntarily provide us with original information about violations of the Commodity Exchange Act that lead us to bring an enforcement action that results in more than $1 million in monetary sanctions.

1 The CME Group now includes the New York Mercantile Exchange (NYMEX) as well as the Commodity Exchange, Inc. (COMEX). Market participants generally still refer to the silver futures contracts offered by the CME Group as “COMEX silver futures.”
Posted by Unknown at 8:20 AM No comments: