As promised Julian Assange's first episode of The World Tomorrow.

Hezbollah urged the Syrian opposition to engage in dialogue with Assad's regime, but they refused. Hezbollah leader Sayyid Nasrallah confirmed this in his first interview in 6 years, the world premiere of Julian Assange's 'The World Tomorrow' on RT.

Posted by Unknown at 8:13 PM No comments:

LONDON -- Britain's exchange rate is "crippling" the economic recovery, and devaluing the pound by as much as 25 percent could push growth back to an annual 4 percent, research group Civitas said.

The pound's "significant" drop since 2008 hasn't been enough to make U.K. exports competitive on world markets, and a future decline in the currency is inevitable, according to John Mills, the author of the Civitas report published in London today. A devaluation of as much as 15 percent would balance the U.K.'s trade deficit, he said.

"The exchange-rate policy we have pursued for decades has made it much more expensive to run most manufacturing operations here than in other parts of the world," Mills said. "Getting the exchange rate down is a matter on which, in the end, we will have no choice." Data yesterday showed the U.K. trade deficit widened to the most in three months in February as exports of cars and heavy machinery fell, especially to the U.S., China, and Russia. British manufacturing has become less competitive as some Asian countries devalued their currencies, boosting their competitiveness and hurting the U.K. economy, Mills said.
Posted by Unknown at 7:26 PM No comments:

Have we entered the eye of the financial cyclone? 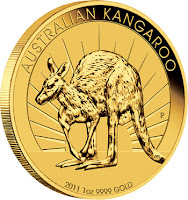 For North American readers a cyclone is the correct scientific term for what you incorrectly call a hurricane.

Gold sales from Australia’s Perth Mint, which processes all of the country’s bullion (tears ~ this statement is so wrong, that is not even worth my normal derision), declined 9.6 percent last month as signs of an accelerating economic recovery in the U.S. curbed demand for haven investments.

Sales of gold coins and bars dropped to 38,123 ounces from 42,161 ounces a year earlier, according to data e-mailed by the mint after an April 13 interview with Neil Vance, wholesale manager at the facility in Western Australia that was founded in 1899. Silver sales slumped 39 percent to 698,559 ounces, it said.

Bullion prices dropped in February and March as U.S. non- farm payrolls expanded, boosting signs that the world’s largest economy is recovering even as European countries including Spain tackle the region’s debt crisis. Sales from the mint may rebound later this year following a pattern seen in 2011, Vance said.

“What’s happened is a little bit more stability in world markets at the moment, and some of the interest has leveled off,” Vance said by phone from Perth. “Since the global financial crisis hit, we’ve experienced peaks and troughs, and we believe at the moment we’re just in a trough.”

“We’re getting to an area where it’s probably smart to get back into the market,” Nick Trevethan, senior commodities strategist at Australia & New Zealand Banking Group Ltd., said by phone today. “The decision to buy is highly dependent on news headlines. We’ve seen in the last day or so, headlines about Europe turning a little bit more gloomy.”

Read more
Posted by Unknown at 7:04 PM No comments:

An English gold bug mate used to swear by The Economist buy signal for Gold. Basically whenever The Economist magazine would publish a hit story on gold, he reckoned the gold price would rise on average a $100/oz within in several weeks. But now what are we to use as a buy signal? The Bernanke saying "Gold is not Money"? or Ron Paul casting out bankster vampires with his silver round?

The following interview with Matthew Bishop, the New York bureau chief for The Economist magazine, and The Wall Street Journal has him advocating gold ownership as a defense against currency devaluation. He even dares to say the heretical statement that government backed "money" is fiat!

I love the 6:04 mark where you can see a pic of BS Bernanke on a screen behind Matthew Bishop's left shoulder frowning at him whilst he is explaining that gold is safe as fiat money is subject to government breaking its promises.

On his prediction of future gold prices, wow don't stick your neck out mate "um gold will be higher by the end of the year and higher in 5 years time" - gee you think so Sherlock?  Last time I was on national TV I managed to get out a prediction of $5,000/oz and just managed to squeeze in "but it could go to $10,000 - $15,000 if....." as Channel Nine faded me out to go to talk to Peter Fitzsimons, oh the shame of being passed over to go speak to someone about sport :'-(


Video streaming by Ustream
Posted by Unknown at 4:58 PM No comments:

Ok who "fat fingered" the gold price in NY Trade. You would have had to be very quick to stack that smack.

Posted by Unknown at 6:17 AM No comments:

US seeks to prolong Afghan war?

Posted by Unknown at 4:29 AM No comments:

Where Silver is mined

Takeaway quote from Max: ".....requires many trillions, you could call it Financial buakke from Ben Bernake and the other central bankers"

In this episode, Max Keiser and co-host, Stacy Herbert discuss the Fukushima of Central Bank quantitative easing policies and the blowfish that is more deadly than a Goldman Sachs CDO. In the second half of the show Max talks to investor, author and radio show host, Peter Schiff about gold, the dollar and Japanese monetary policy.