Max Keiser and Stacy Herbert cover the markets, finance and scandal in this week's radio show.

Posted by Unknown at 1:44 PM No comments:

Gold surges back above $US1300 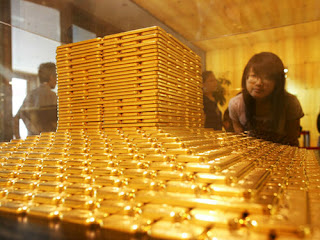 Gold surged 3 per cent and hit a one-month high on Monday, vaulting back over a technical threshold at $US1300 an ounce as speculators fearing a reversal of the recent downward price trend rushed to buy back bearish bets.

It was gold's heftiest one-day gain in 13 months and its three-day rally is the biggest in almost two years. Also contributing was heavy short covering as futures investors anticipating the start of delivery period on August contracts rolled positions from August to December. The first day for delivery notices is July 31.

As well as the unwinding of short positions, weaker-than-expected US housing data overnight has also been a factor, said Jordan Eliseo, chief economist at precious metal supplier ABC Bullion.

"It started in early Asian trading and it was probably sparked by a report, which showed that a lot of the short positions that have been in place for gold and that have been at record highs of late have started to unwind. People got nervous and they also started covering their positions and that caused the initial rally up above $US1300.

"There was a continuation overnight off the back of some disappointing US data. Home sales came out worse than expected and a continuation of the weakening trend in US housing since yields started to pick up. What we're seeing is a realisation from the market that the Fed cannot taper, or if they do taper, it'll a long way away from normalised monetary policy and people ... don't want to be short gold anymore."

Mr Eliseo said it was important to remember that gold remained in bearish territory this year. Gold has lost 20.23 per cent this year, while silver has slipped 32.22 per cent.

"It's not that people are getting wildly bullish on gold, they're just not as bearish anymore. But the futures market was so tilted to the short side that even people just removing bearish bets is enough for the price to rally quite strongly," he said.

Nice action in NY trading overnight as traders covered short positions exposed with the price jump in gold over $1300 during earlier Sydney trading. Gold finished the COMEX session at $1336 or 3.33% up from the Friday close. Silver also provided smiles for long suffering Ag bugs with a strong pop above $20, with the COMEX closing at $20.51 - a massive 5.39% rise over the close on Friday. 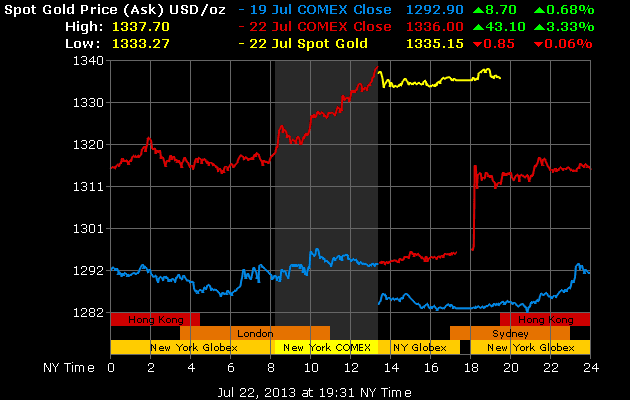 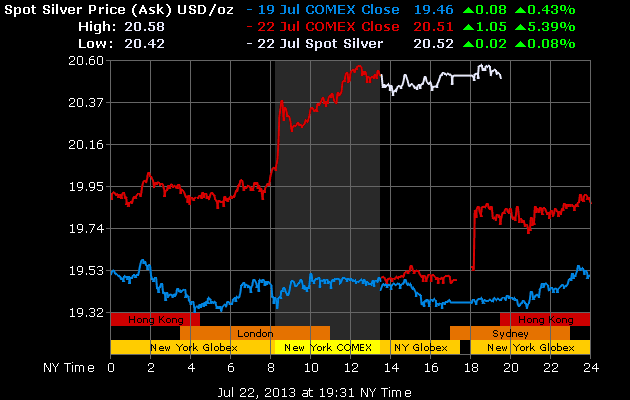 Charts from goldprice.org
Posted by Unknown at 9:39 AM No comments: